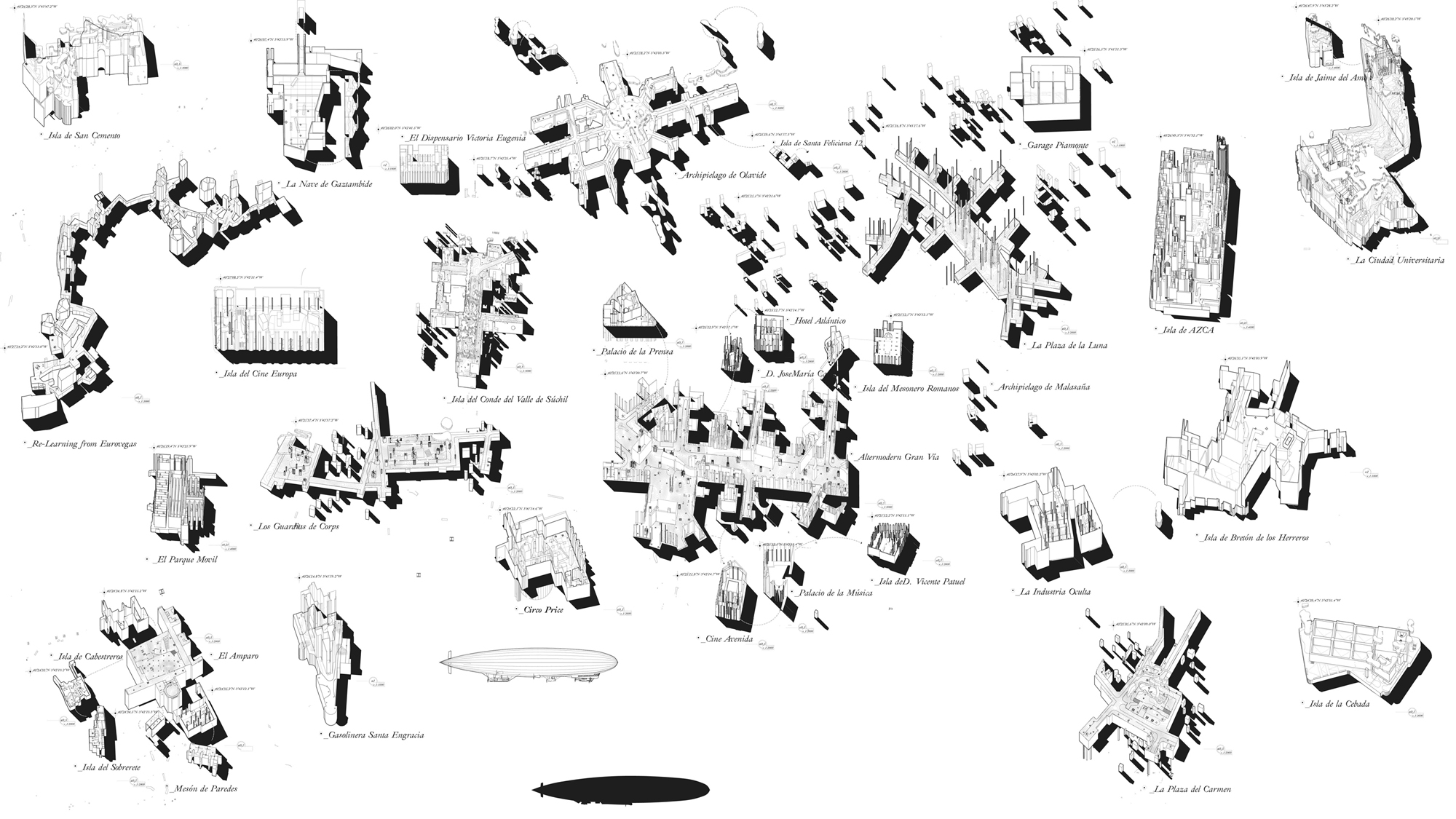 an Atlas of Metropolitan Islands for Madrid

Instead of analyzing the post-post condition of the contemporary city as a state of crisis, under the necessity of correction, we ought to treat radically immanent conditions of the city as a projective model for the metropolis itself.

The Archipelago offers a draft project, an action plan, for the European metropolis.

This is due to the differentiation of fragments of intensity, located islands, usually conceived as cohesion amid public sphere and the surrounding metropolitan mass. The archipelago triumphs because it addresses the potential of architecture to create urban pockets of meaning and significance. The islands are prototypes of the city within the city.

Could this multiplicity help to negotiate the apparent inevitable juxtapositions of the European metropolis?

May architecture then become the city, while the city becomes a highly congested vacuum?

Scenes are identified. Spheres that behave as a relational framework for every metropolitan agent. Those scenes are landscapes doable to be modified or blurred by the different agents interaction. Each piece, each scene, each island, behaves as a laboratory. A “laboratorization” of the city as an archipelago is established.

Islands have been delimited. Interaction with some agents has been performed in order to translate the limits of those prototypes of the city within the city. It is important to focus on the actors, or even on how do they behave as mediators. An actor does not just play a role. It is not by definition entirely replaceable, interchangeable with other. It transits amid the scenes as a unique event. Information becomes transformation. Either we have actors that suppose potentialities and therefore they are not actors at all, or we shall describe our actors as renderized virtualities of our reality, which means admitting their specificity.

Contemporary culture requires architecture not being just an “epoxy” that holds together a series of physical and non-physical agents, which other disciplines cannot hold. Instead, architecture behaves as everything that is fixed together by many other sorts of connectors.

Topological Representation
of the Atlas of Metropolitan Islands for Madrid ↑

Geographical Representation
of the «Archipelago Lab» → 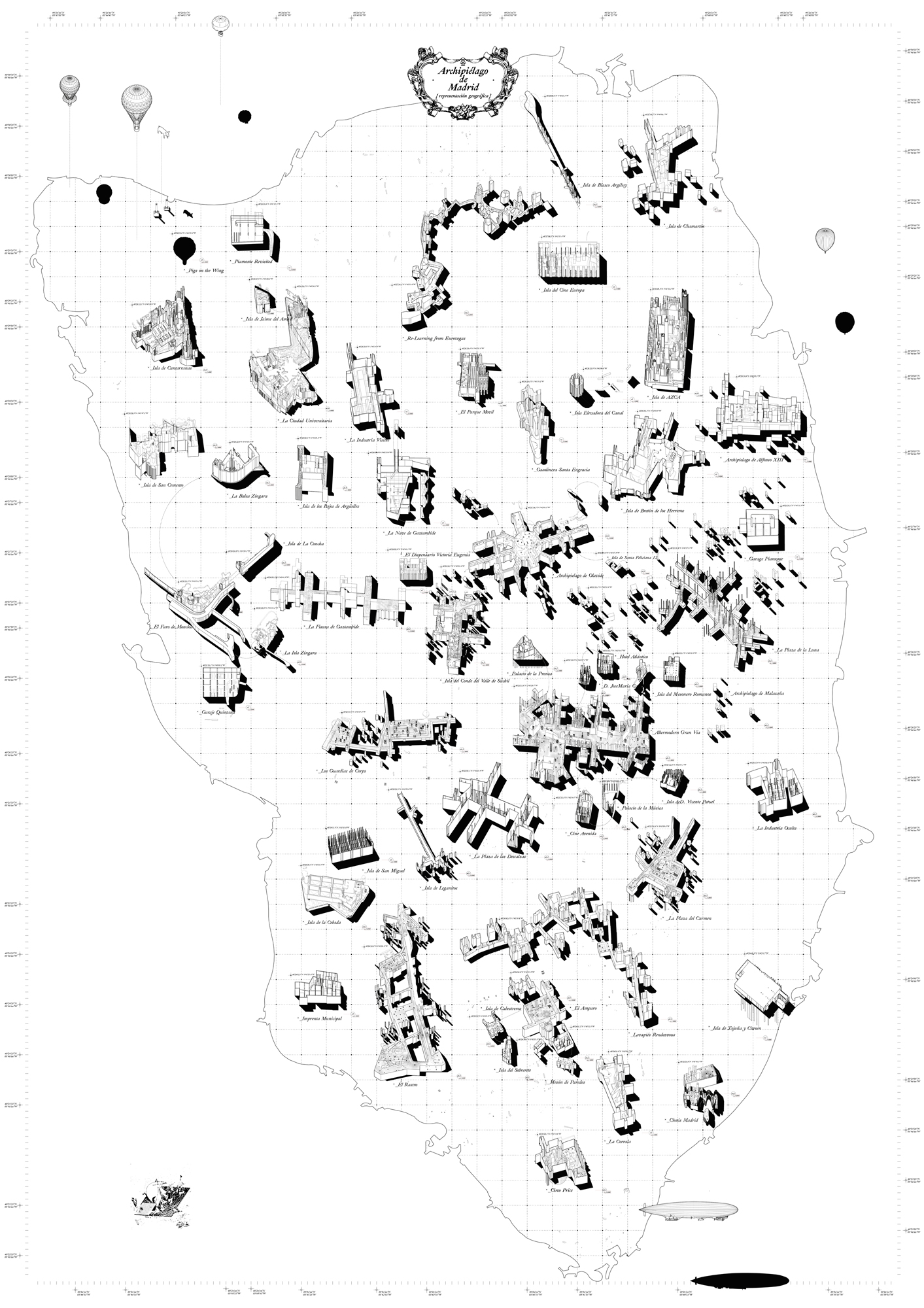 “The desire for stability and the need for instability are no longer incompatible…this city is presented as an archipelago of architectural islands floating in a post-architectural landscape of erased mass, where whatsoever once was urban becomes a highly congested vacuum.”

Seven Typologies are identified. Each of them corresponds to an existing metropolitan situation, which generate city and construct society; but which are not included within the professional practice of urbanism neither are they represented according to architecture tools.

Seven concrete cases are presented, from the compendium of islands that configure the project for the city. Seven documents. One for each island: plan, section, elevation, image, structure, details and axonometry. Seven situations itemized, which will not just explain metropolitan islands separately, but would trace a unitary project that constitutes the narrative of the city of Madrid as an archipelago. 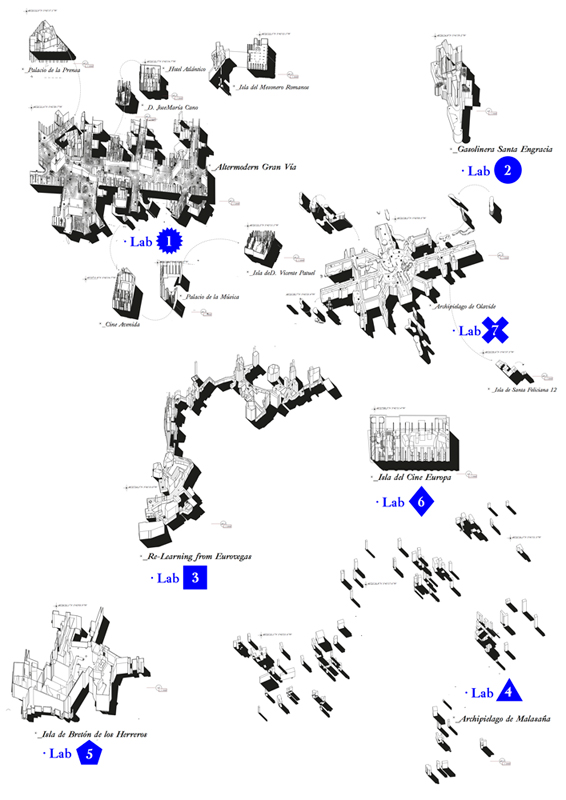 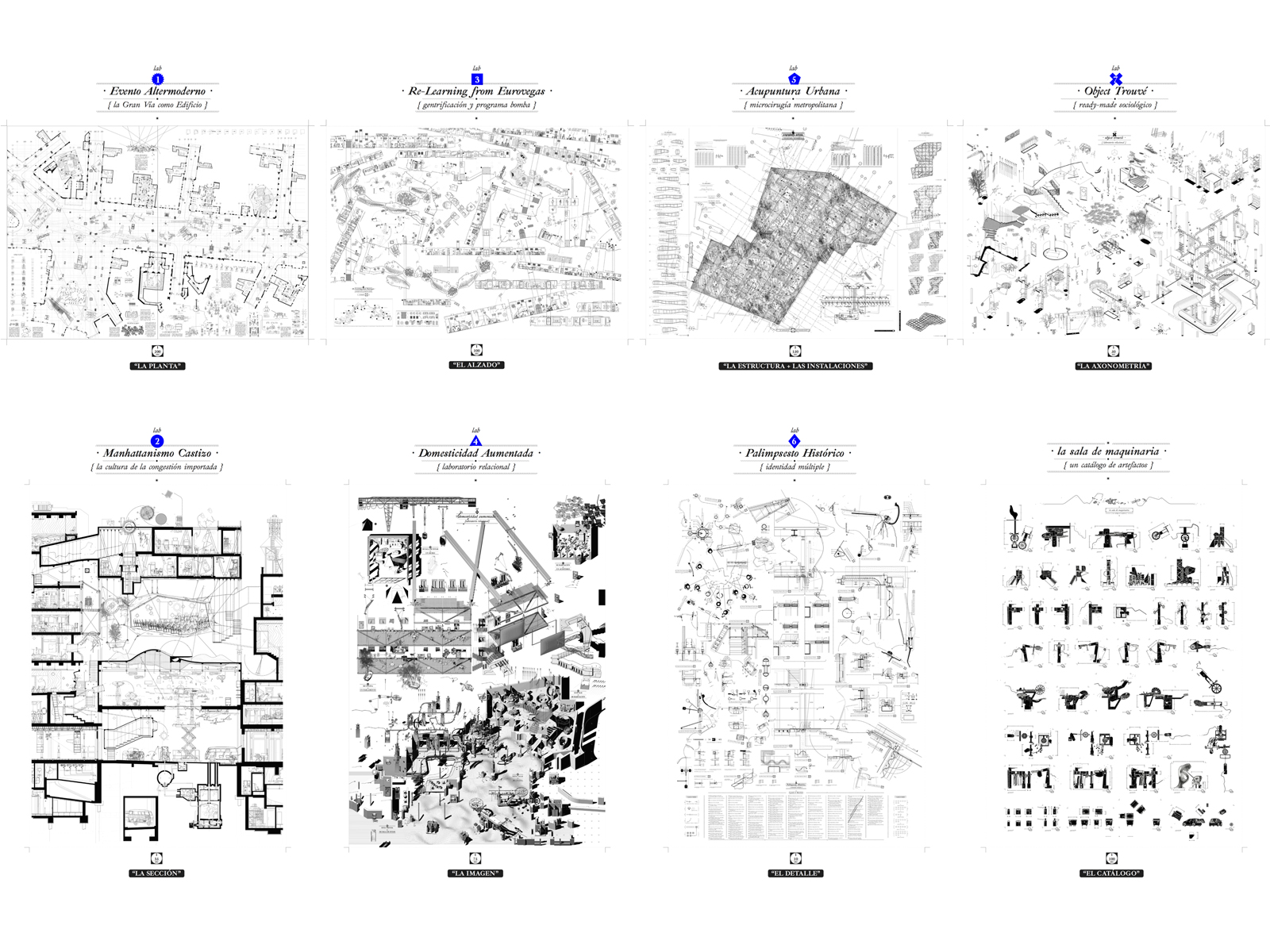 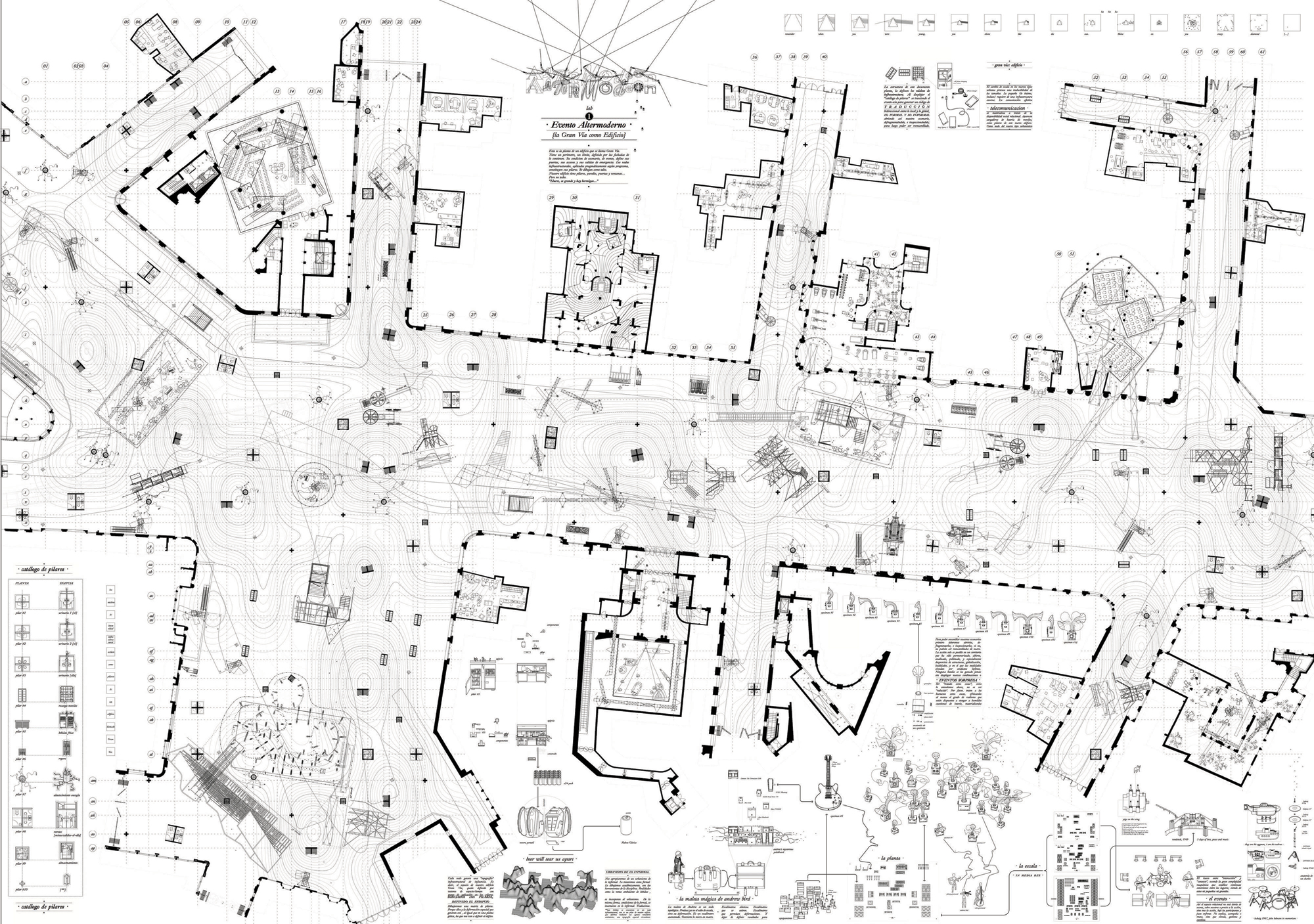 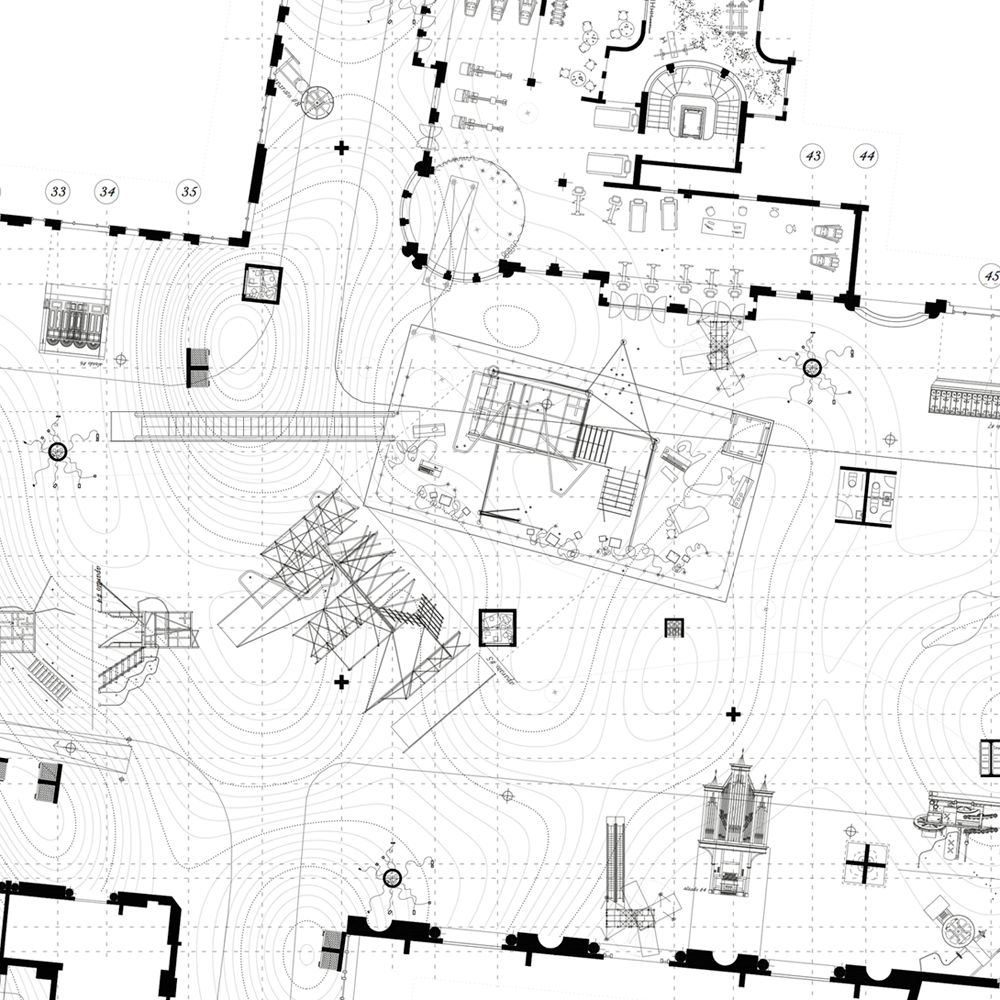 The Altermodern Event is a urban typology, and therefore, its architectural form can be defined. It is represented according to the traditional tools of the discipline. A plan is traced.

An Altermodern Event is proposed within the Gran Via Street context. The program is introduced from the very urban space of the street to the buildings that demarcate it, which become participants of the event. Those spaces are drawn included in the plan. The extension of the program defines its physical perimeter.

This is the plan of a building called Gran Via Street.
←

Through the laboratorization of our metropolitan islands, equipping them with tools behaving as topological vehicles, we will “localize the global” and “redistribute the local”, far away from a rigid classification of frames and contexts. The laboratorization of our islands allows them to be re-assembled and re-expanded. A continuous translation would arise, indeed. In the interpreters is the game. Laboratories would be the rosetta stone of the new urbanism. 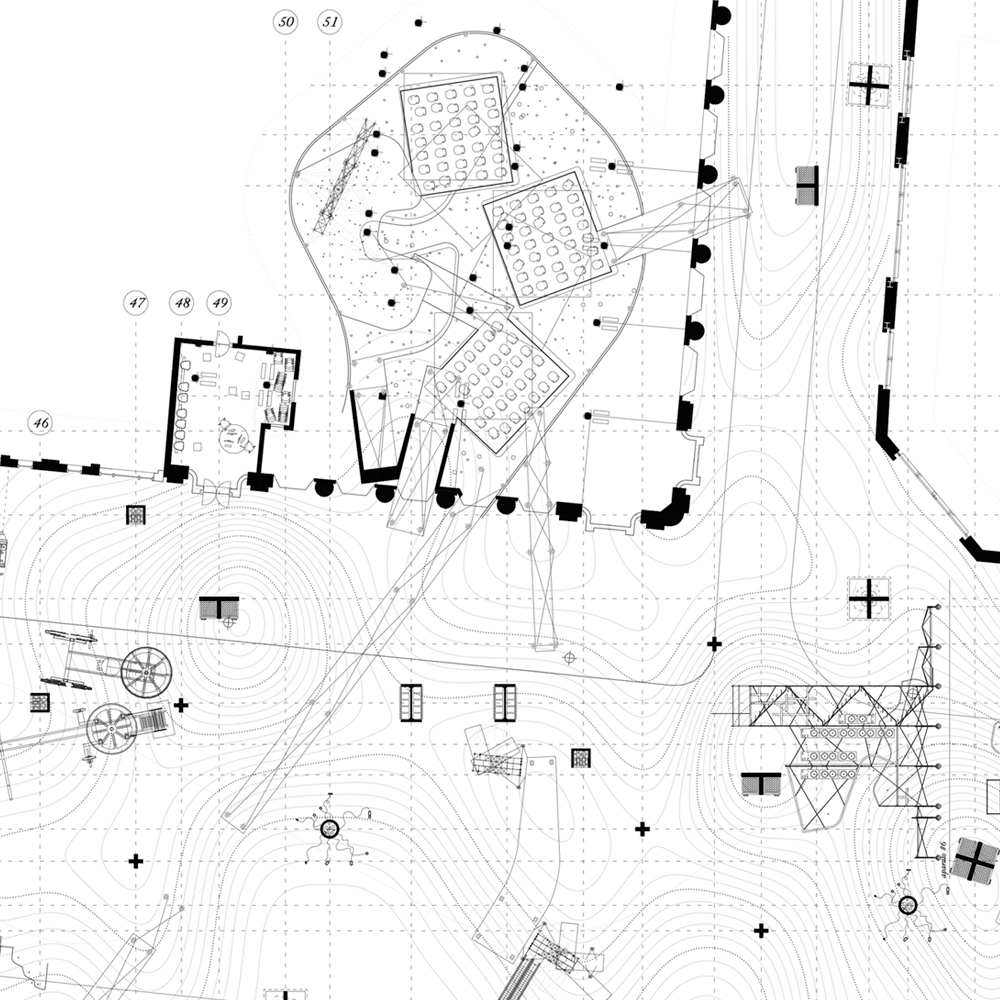 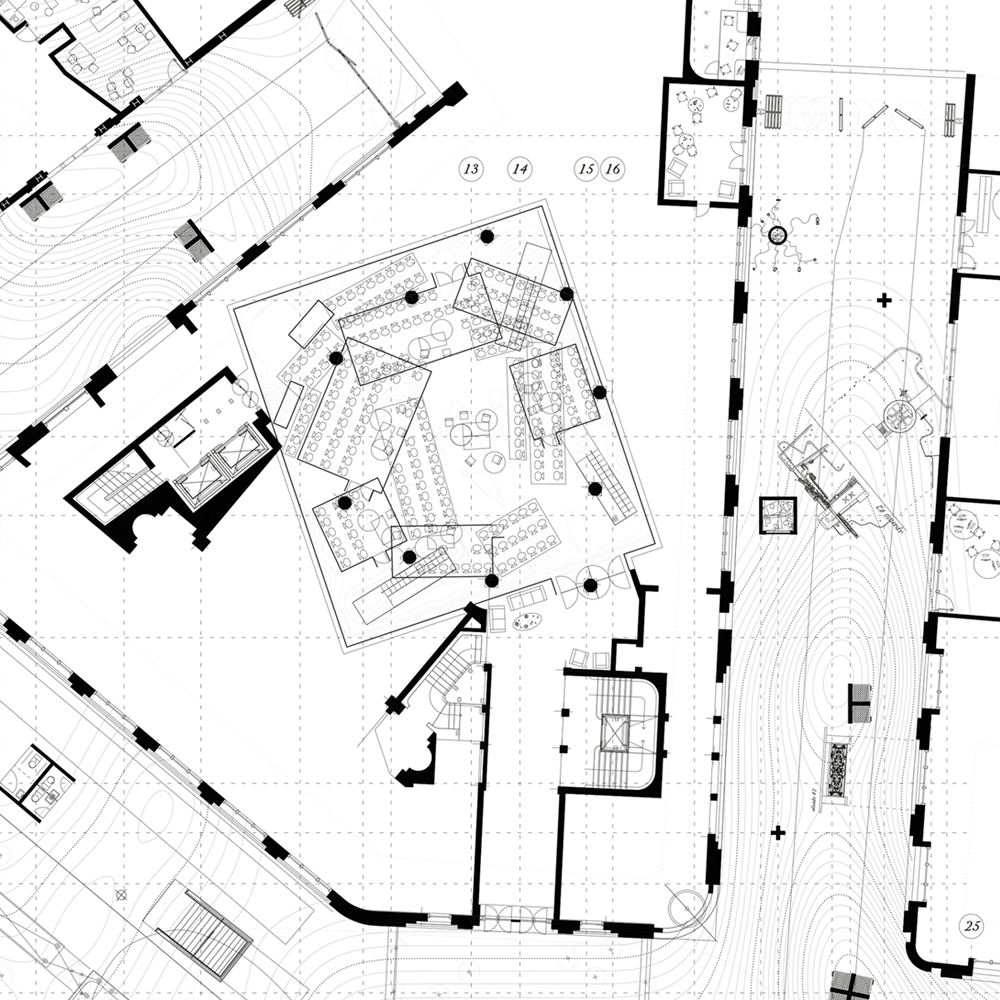 Altermodern Gran Via is a building with a perimeter, a limit, defined by the façades that enclose it. Its condition of scene, of stage, defines its doors, its access and evacuation paths.
The infrastructural nodes, applied pragmatically according program, constitute its structure. They are drawn as pillars. The plan is provided with axes.
Our building has pillars, walls, doors and windows. But no roof whatsoever. 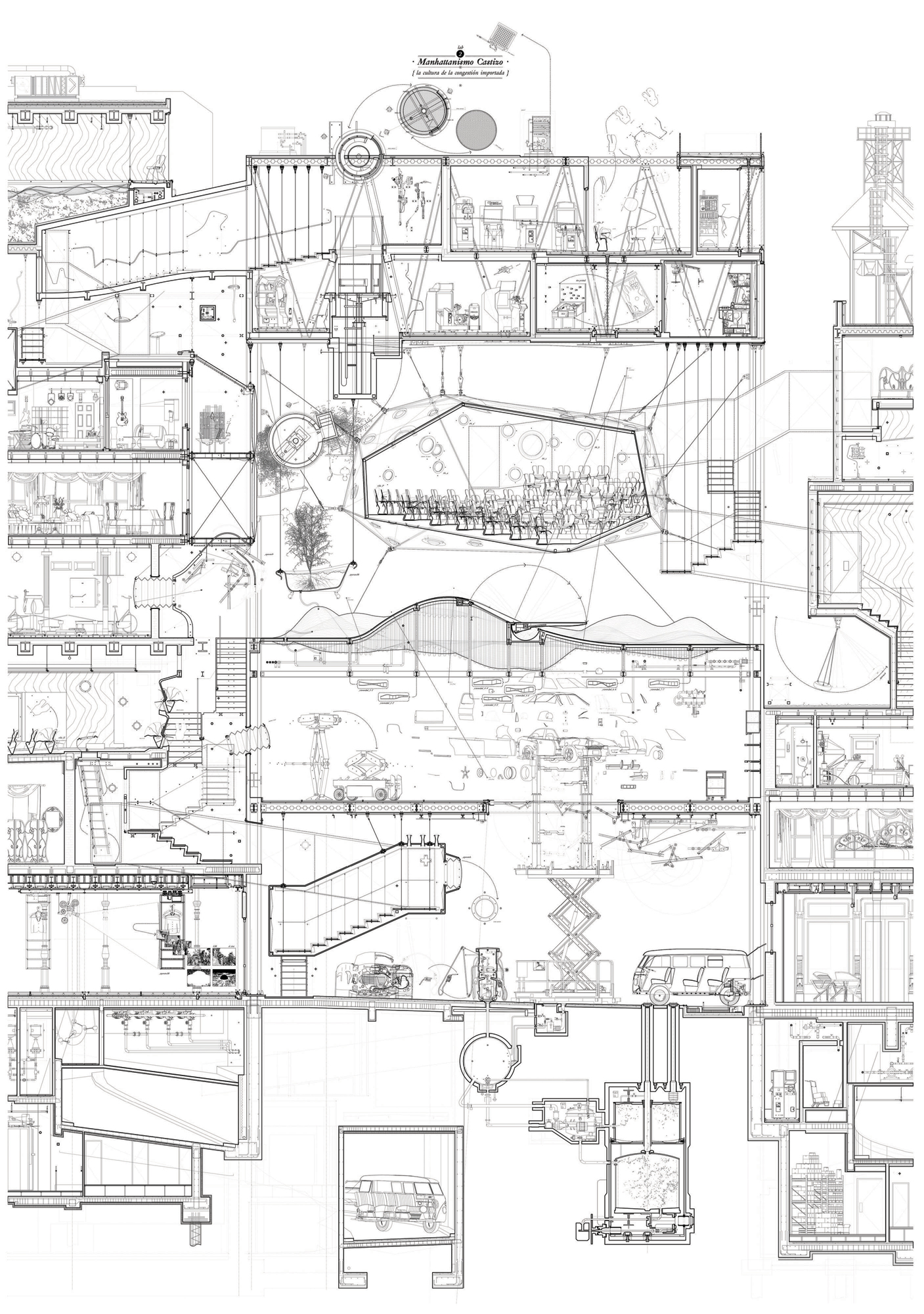 Lab_2: Manhattanismo Castizo [the imported culture of congestion] – a section ↑

The Programs of Congestion that define the typology of Manhattanismo Castizo, are not so easily clasificable as S, M, L, XL. But rather decrease and are fence, shrink and expand at an overwhelming speed. Size and zoom should not be confused with connectivity.

A section document is presented in order to explain Manhattanismo Castizo. A section that defines the importation of Koolhaas’ thesis on the city and the metropolitanism to the rest of contemporary cities.

The Petrol Station at Santa Engracia Street is taken as a case of study. In the middle of Chamberi’s neighbourhood. It holds a previous condition of congestion, hybridizing and stacking of programs in section (basement, petrol station, shops, offices, dwelling). The intervention supposes an exaggeration of its immanent qualities. 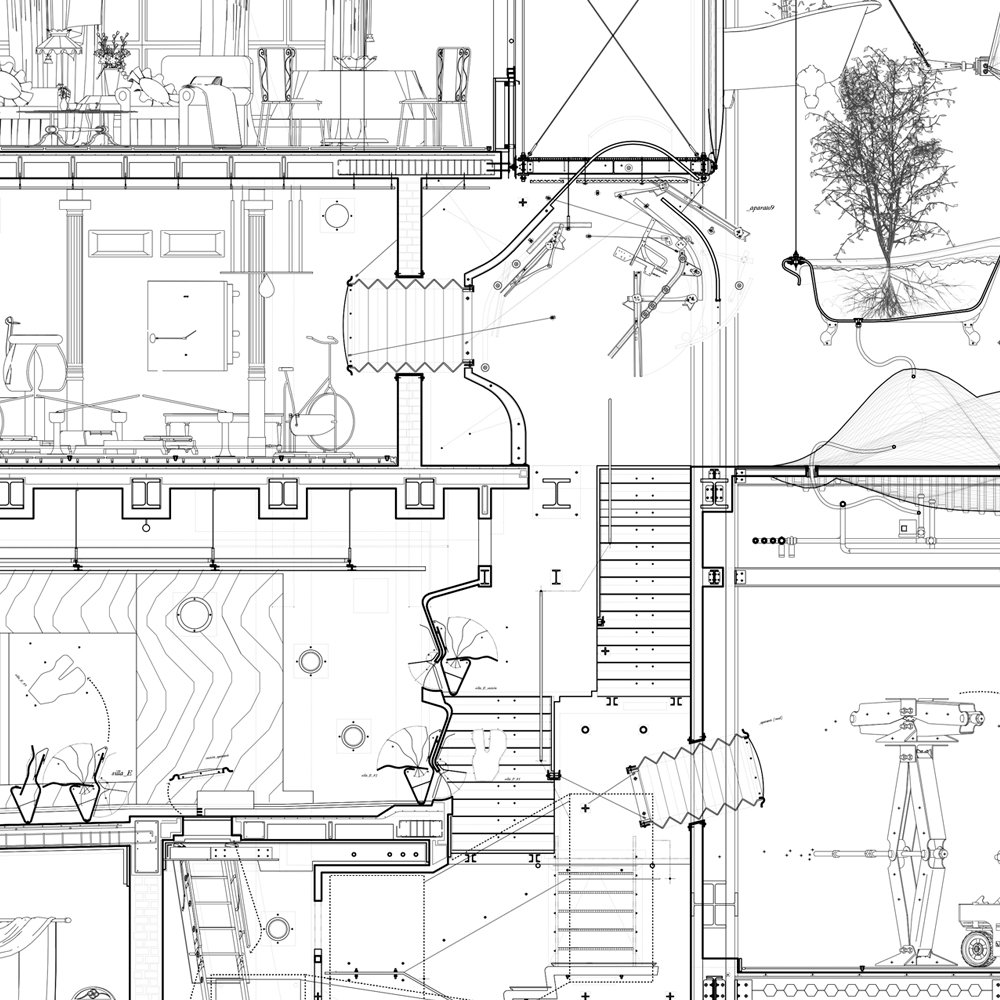 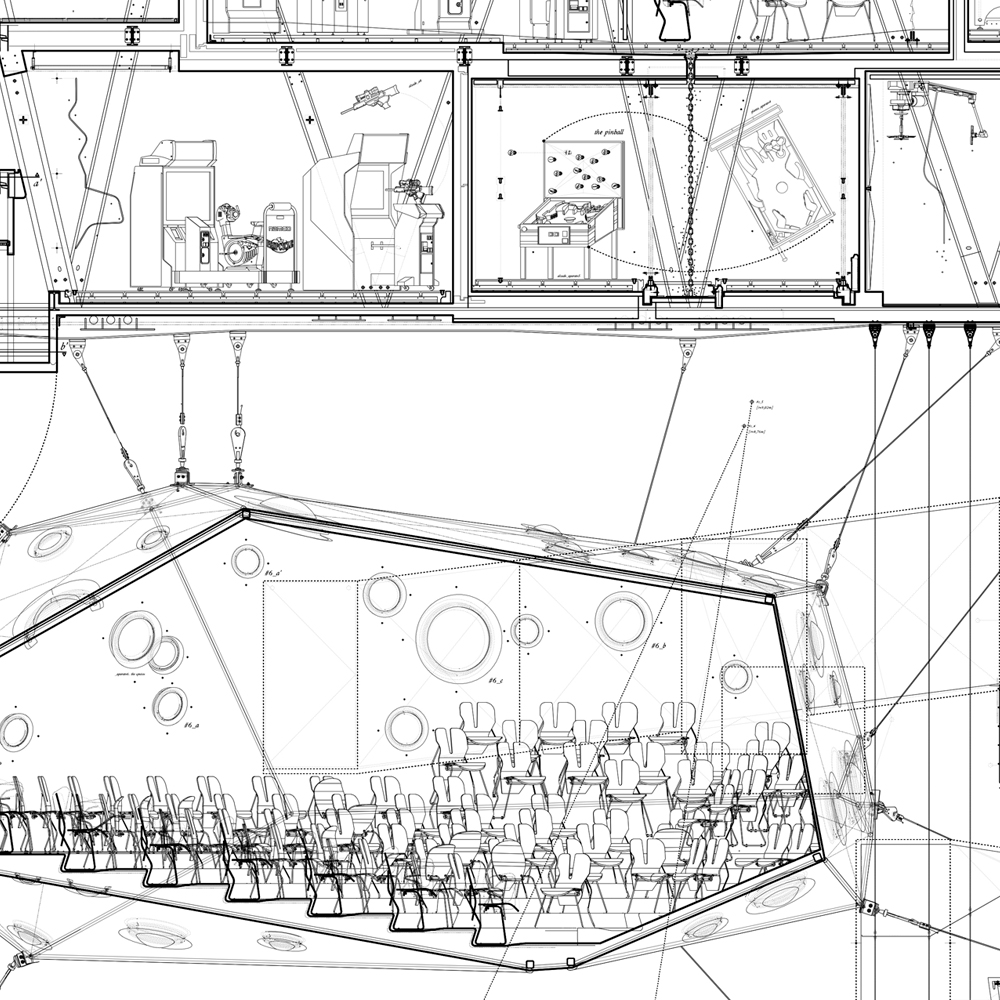 Each one of the “actuations” that congest the piece is just a fragment of that bigger spectacle that is the metropolis. Its uses’ juxtaposition extols the ultimate instability of its scale, and hence of its form. 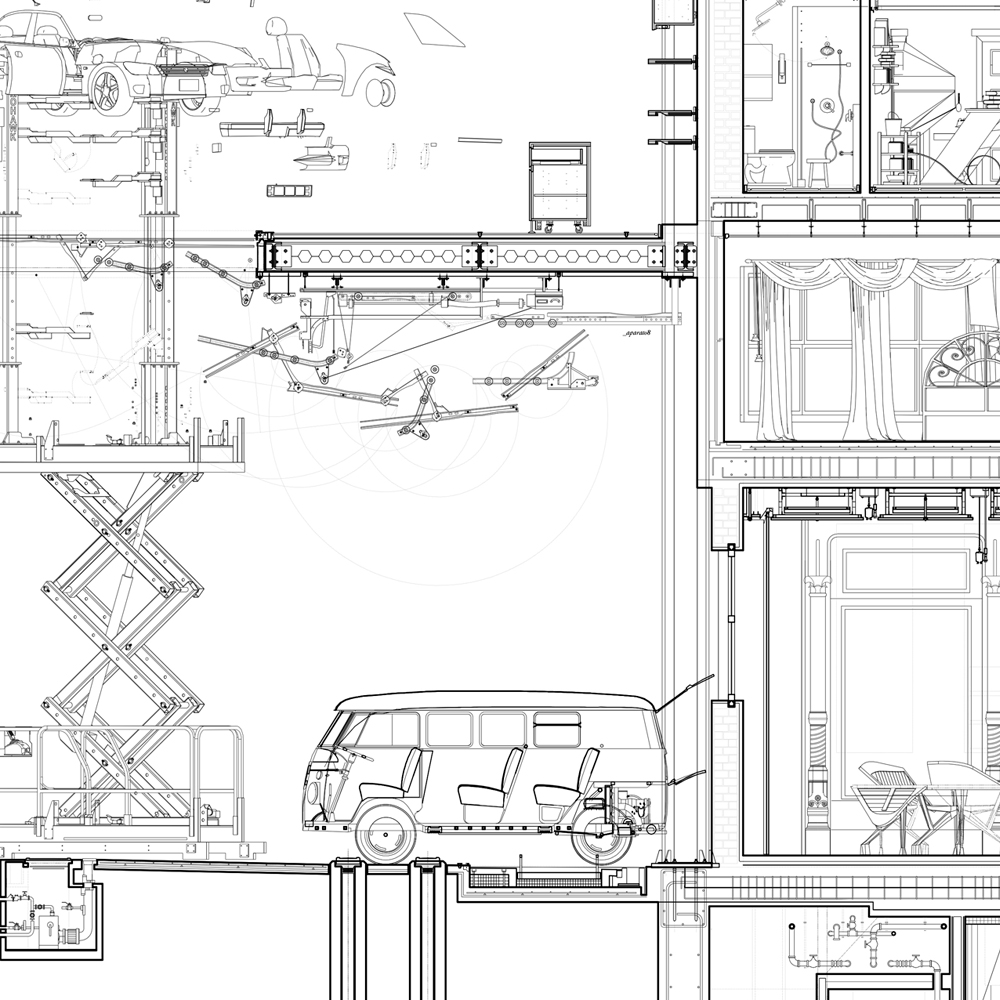 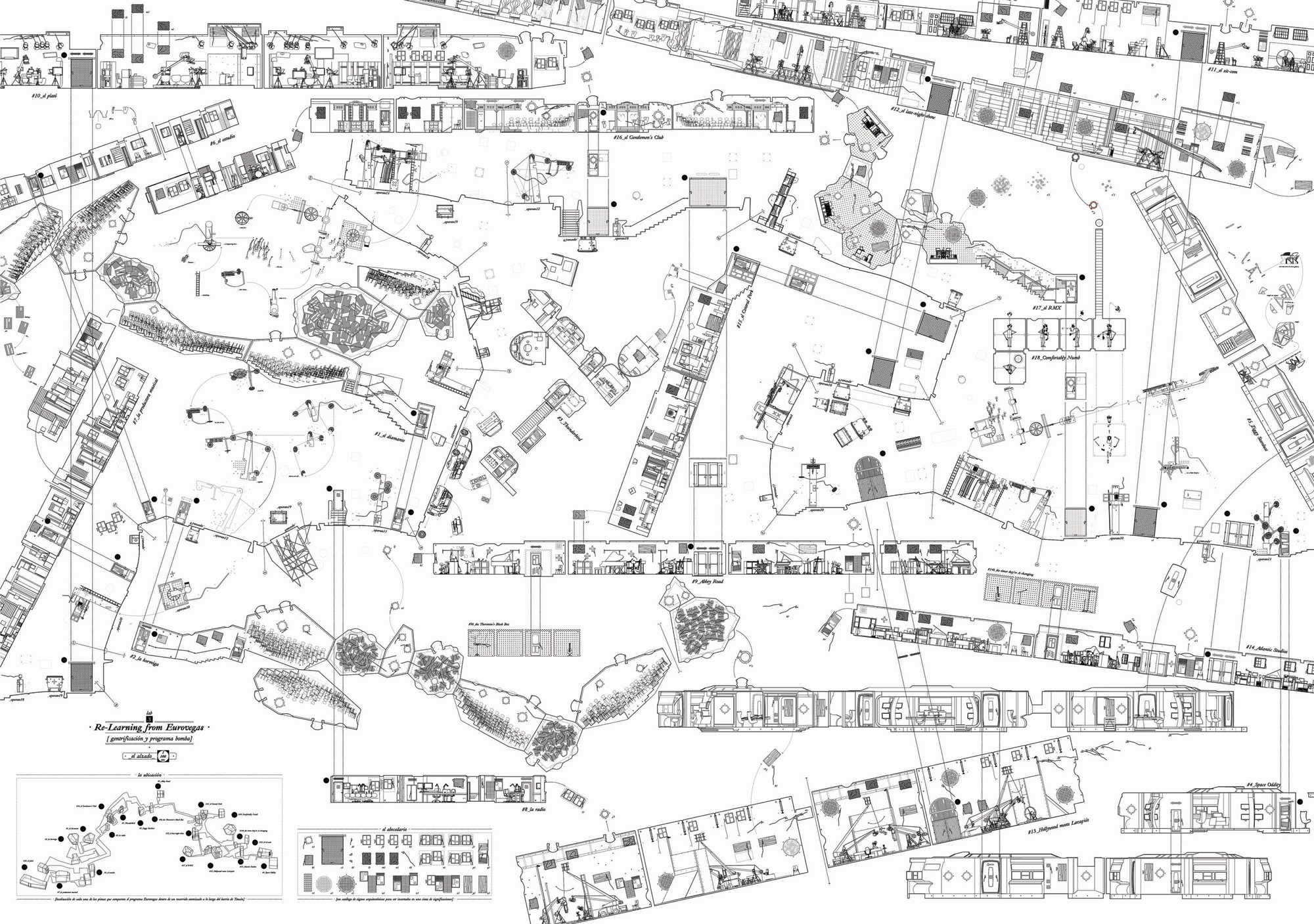 Re-Learning from Eurovegas is defined from its elevation.

This typology and this document constitute a revision of Robert Venturi’s and Denise Scott Brown’s postulates.

The programme of Eurovegas is atomized along a fragment of Tetuan’s Neighbourhood, generating a situation of Positive Gentrification. Eurovegas is treated as a “bomb-programme”, as a double-edge-sword, which will be appropriated by local agents for their personal benefits. 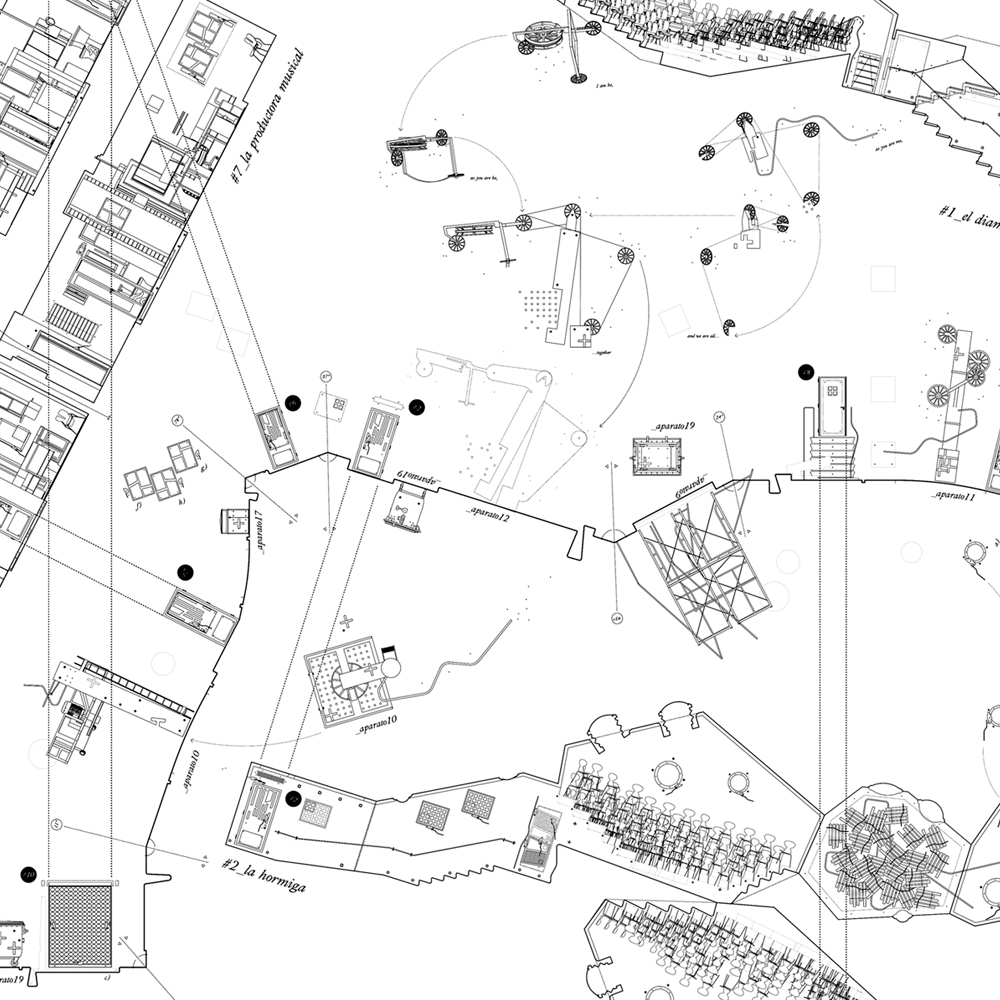 In fact, programme is not as relevant as internal protocols that define Re-Learning from Eurovegas. In this typology, the stiffness of its economical agents determinates the autonomy of urban fabric. The latter, is inversely proportional to its form’s consolidations as fabric. The more atomized the more efficient it is. 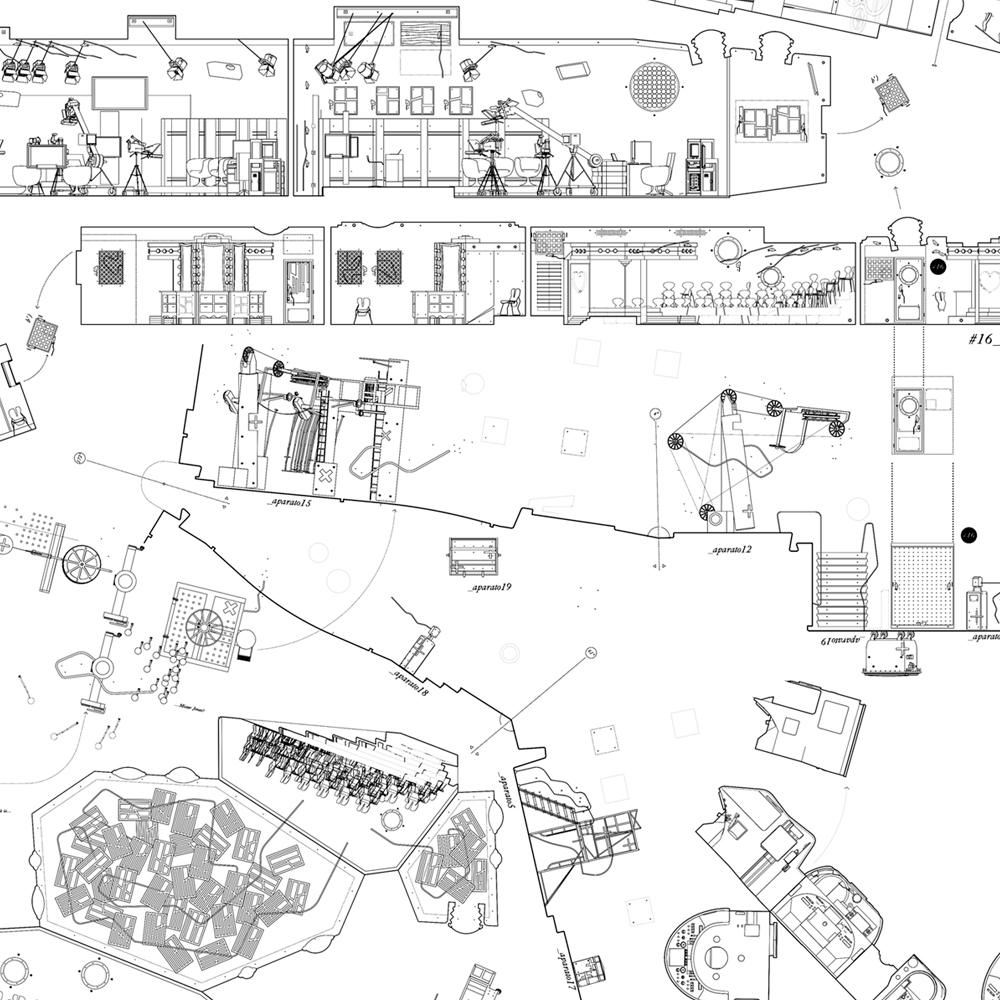 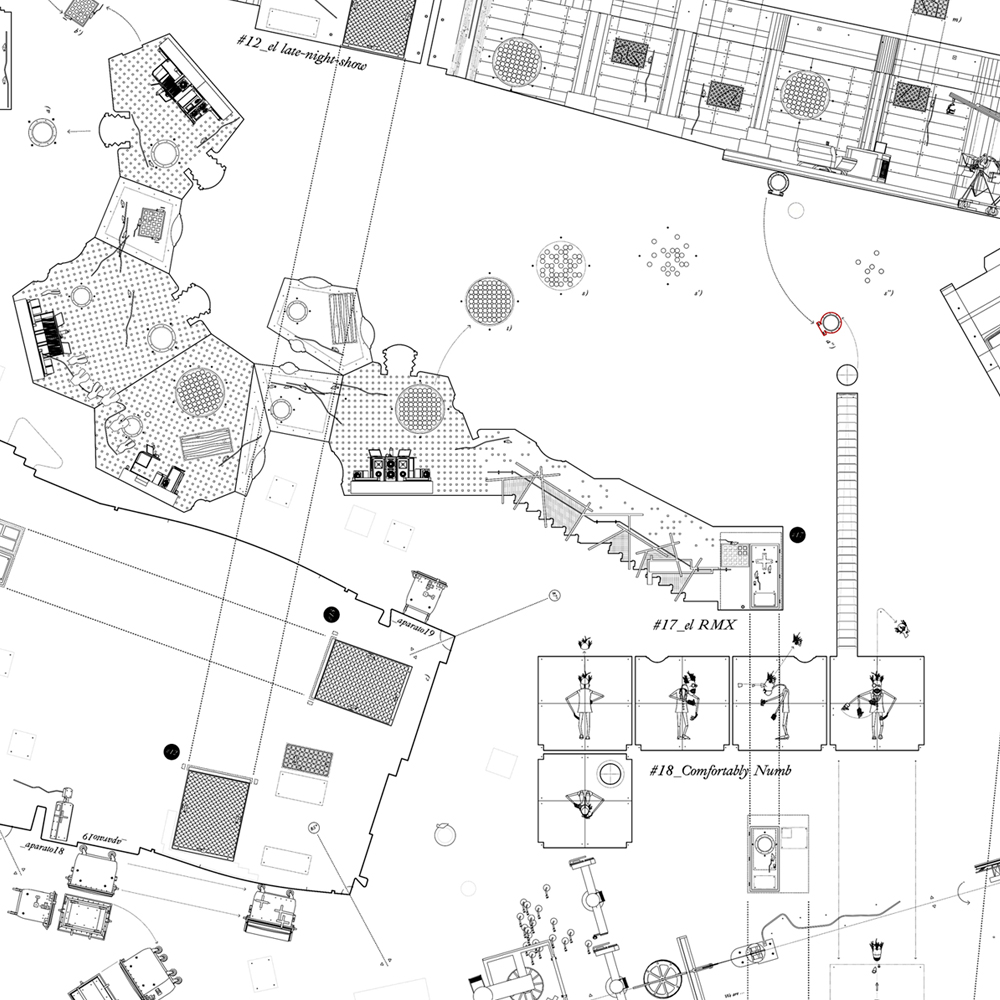 A compendium of unfolded internal elevations of each piece is presented which, sharing a common programme, are distributed dispersedly within a consolidated urban fabric. 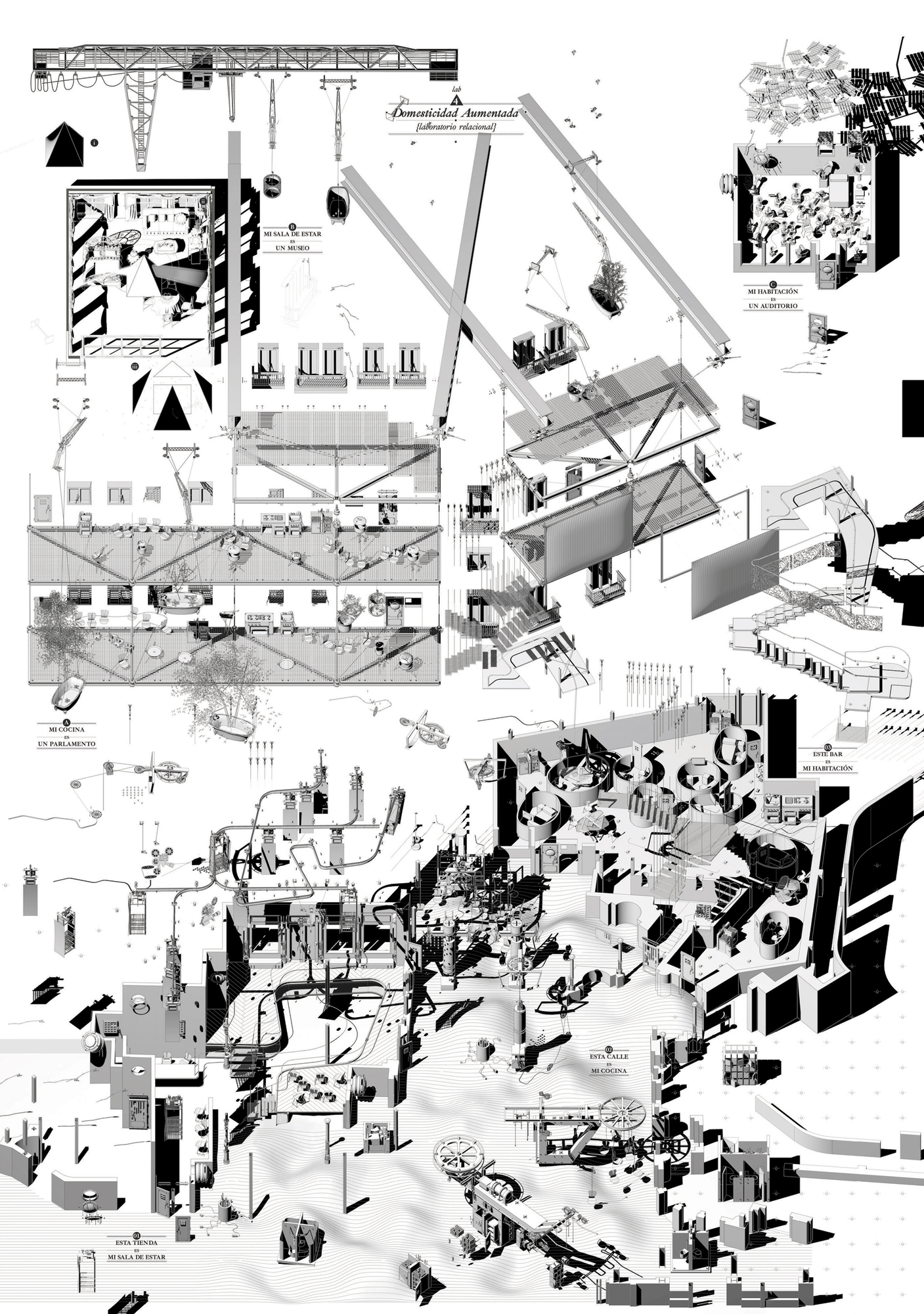 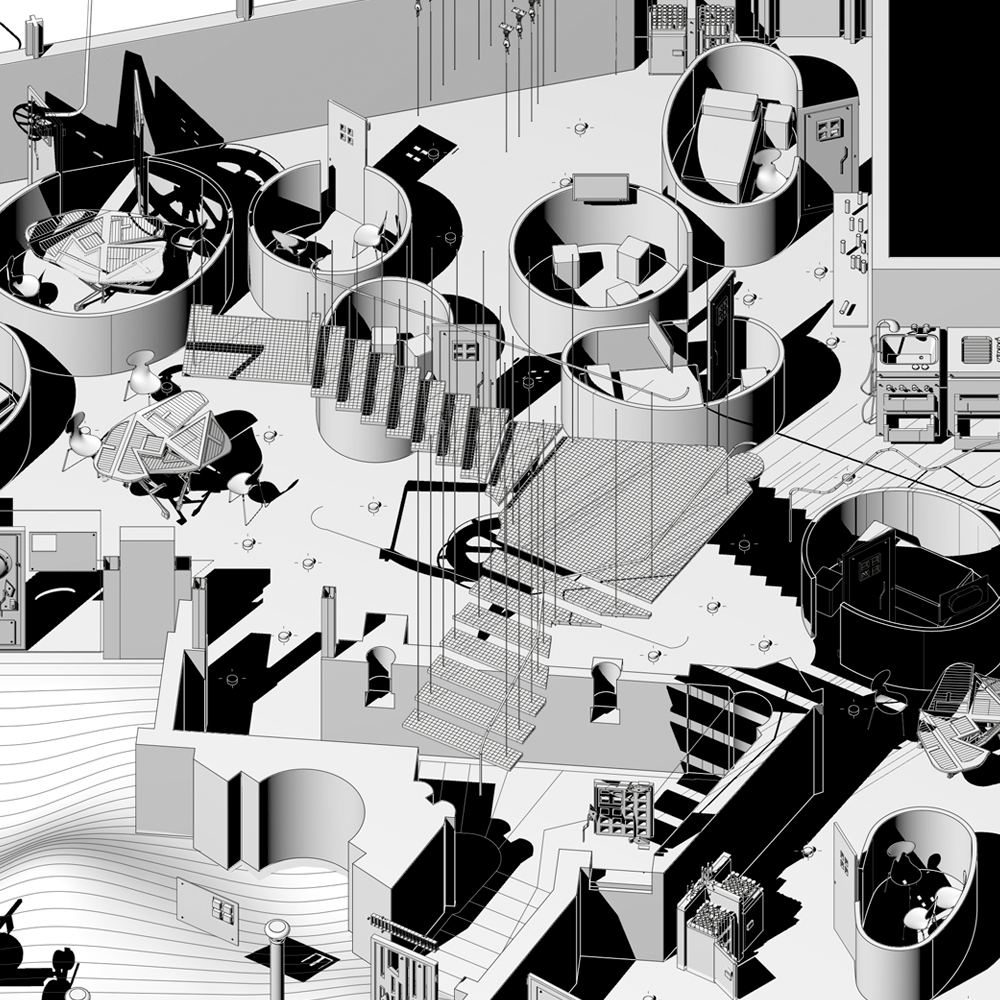 There is a continuous information exchange amid the apparently urban and the apparently domestic. Deforming their limits. Defining a Domestic Urbanism and an Urban Domesticity.

The Augmented Domesticity appears as the fourth typology of the contemporary metropolitanism, under a schizophrenic and bipolar condition. The bicephalous typology.

This typology of contemporary metropolitanism emerges from the tension between urban and domestic. Whenever domestic situations invade the urban sphere. Whenever urban situations insert into domestic sphere. 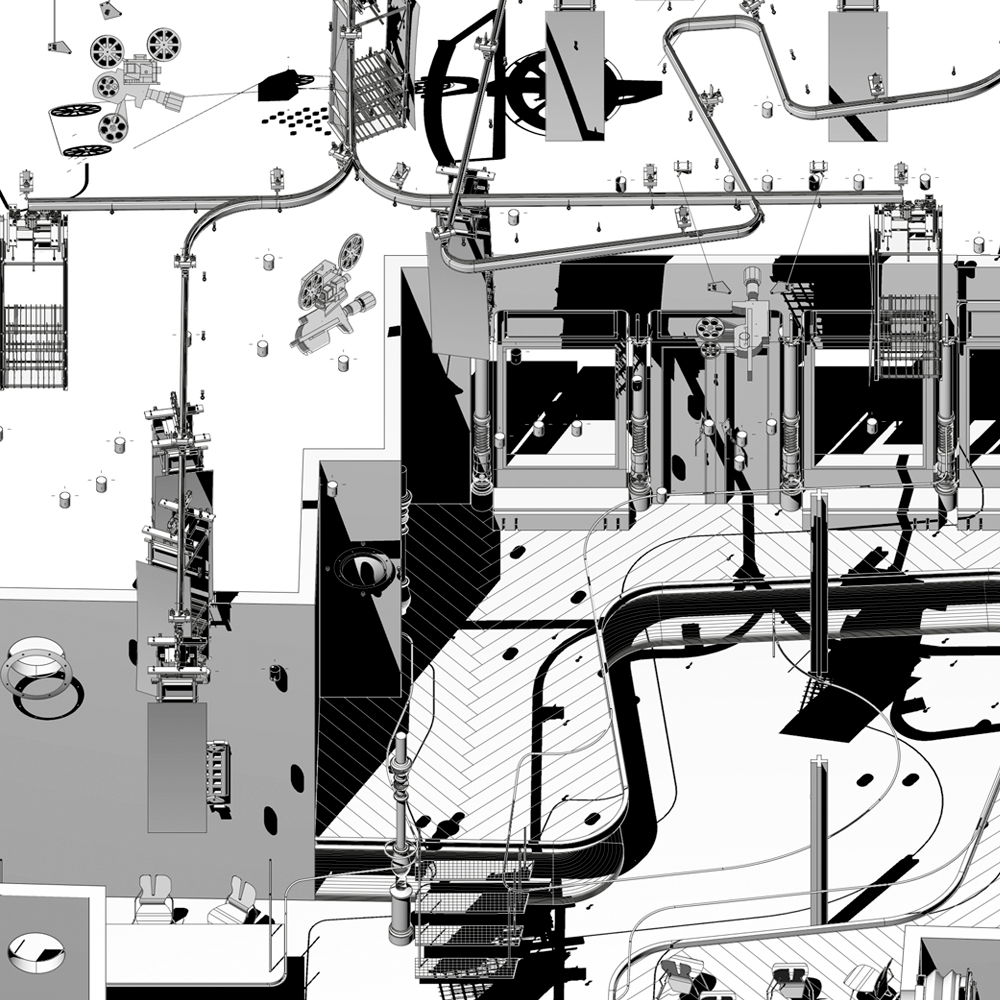 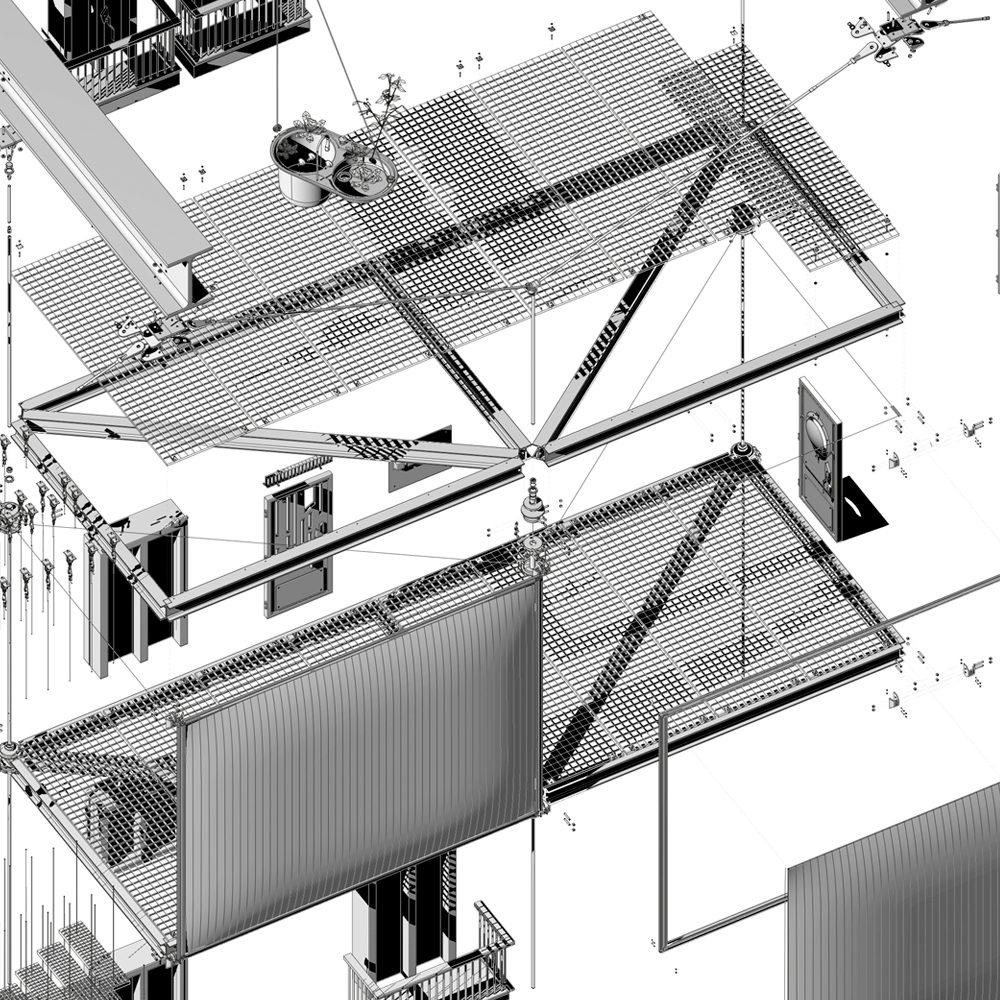 Three pairs of symmetric scenes are proposed within Malasaña Neighbourhood. The mirrored juxtaposition allows, with an image document, to define the materiality of this schizophrenic metropolitan typology 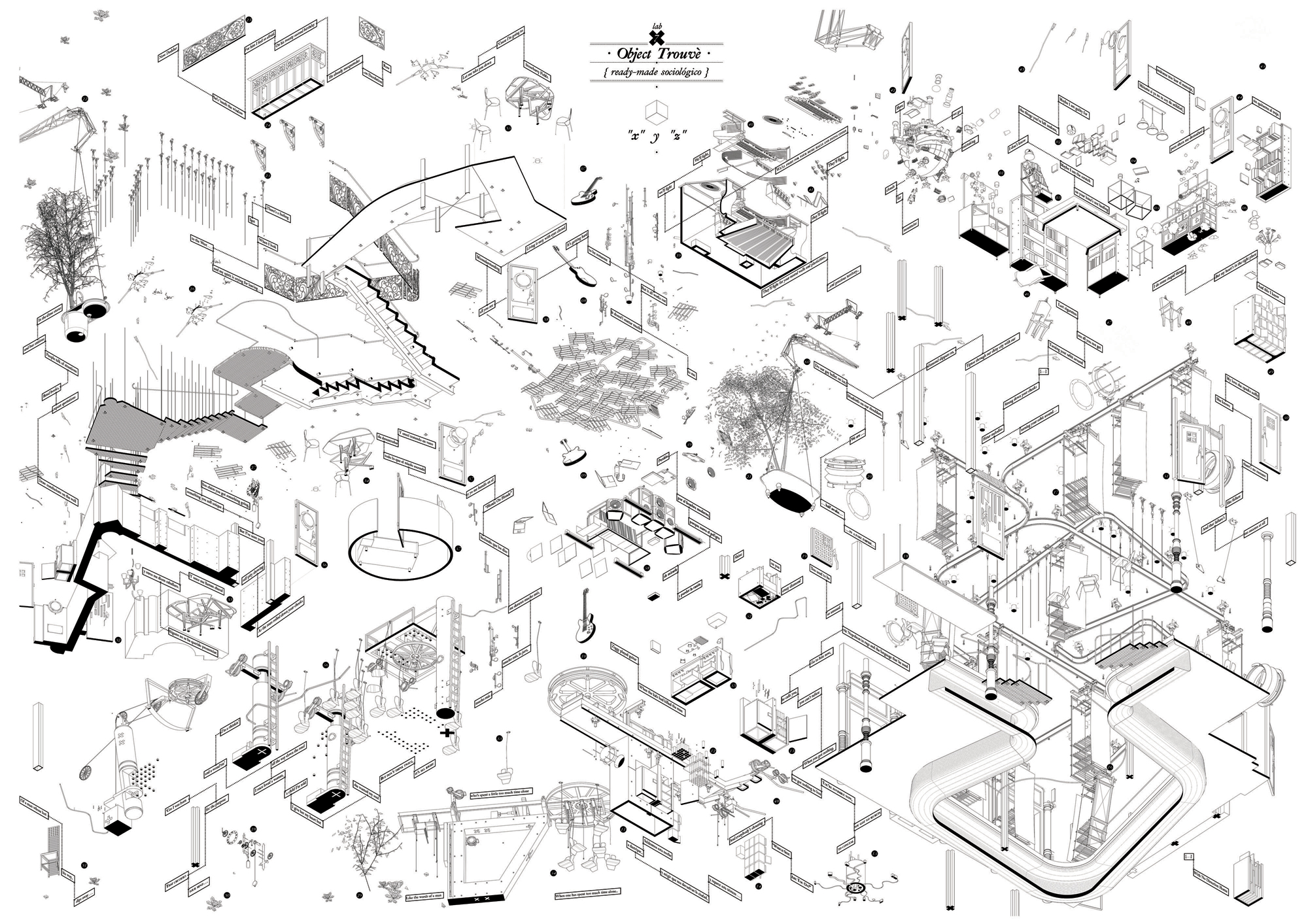 The sociological ready-made (the objet trouvé) is presented as a metropolitanization of relational space, of the emotional sphere, of the expansion of the scale of the intimate. → •
the Chamber of Machinery the Chamber of Machinery [a Catalog of Artifacts]   ↑

The Chamber of Machinery constitutes a document that gathers a series of pieces that navigate, almost adrift between islands. Under a principle of non-belonging, they travel constantly, they fade and destroy origins, they “viatorize” and perform translations successively, non depending on the continental world but on the Archipelago Lab.