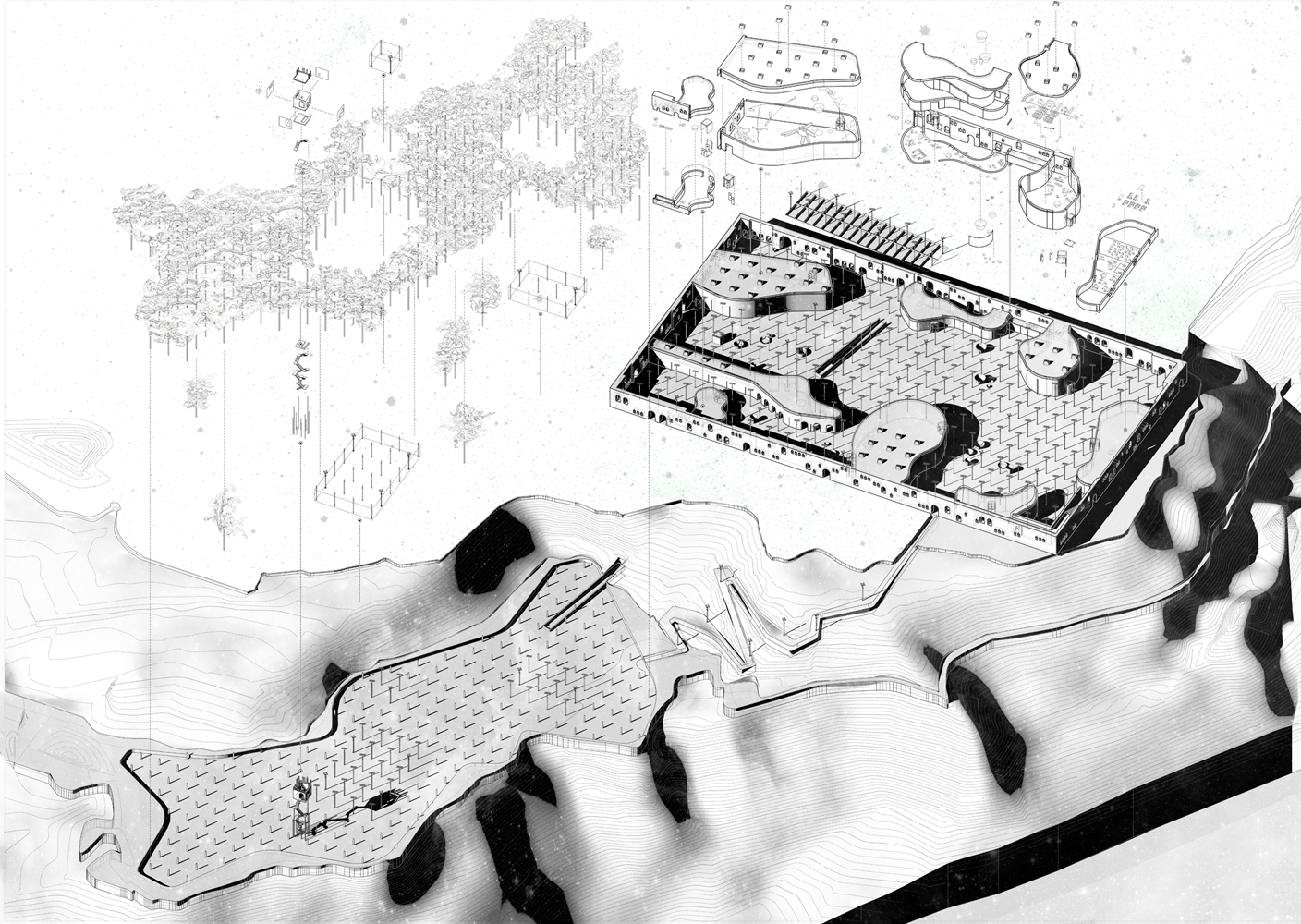 a project for a future past

A unique site arises as a condition of opportunity.

A place where time shapes form. A place in which social uses trace the lines of a flexible architecture.

A project in which a shelter is not provided in order to hold the public sphere; but is the public sphere itself that performs its role outlining an architectural scene. The social appropriation of this site allows this project to arise. Programs and uses come first, places and shapes second. This is a place in where a continuous reinterpretation of its content shift the context’s approach. Content permutes, moves and transforms itself behaving as a context. And context becomes project indeed.
Hence, a flexible space is needed. Within such a complex contemporary reality, program requirements are not the factor that shapes the building, but time instead. Adaptability to any social condition that appears would be the project’s target.
A space to exchange ideas, congregate and establish a vibrant community is needed. The importance of cultural identity and its role in shaping the future appears as an important condition.
Therefore, the integration of the physical environment as well as the different sociological requirements emerges such significant purpose to achieve. It will be a vital centre for the cultural community, integrating an environmentally conscious design.

This project’s architecture behaves as a motherboard. Where the insertion of new programs does not change the projects identity, as it is precisely its ambidexterity what defines it. The translation of uses that take place in each very particular part of the building settles the project’s rules.
The absolute tension existing between its function’s undefinition and its form’s concretion allows the project, not just to adapt to a context, but also to create a new one.

The project embraces a unique momentum: what was supposed to be a boundary would eventually become architecture. 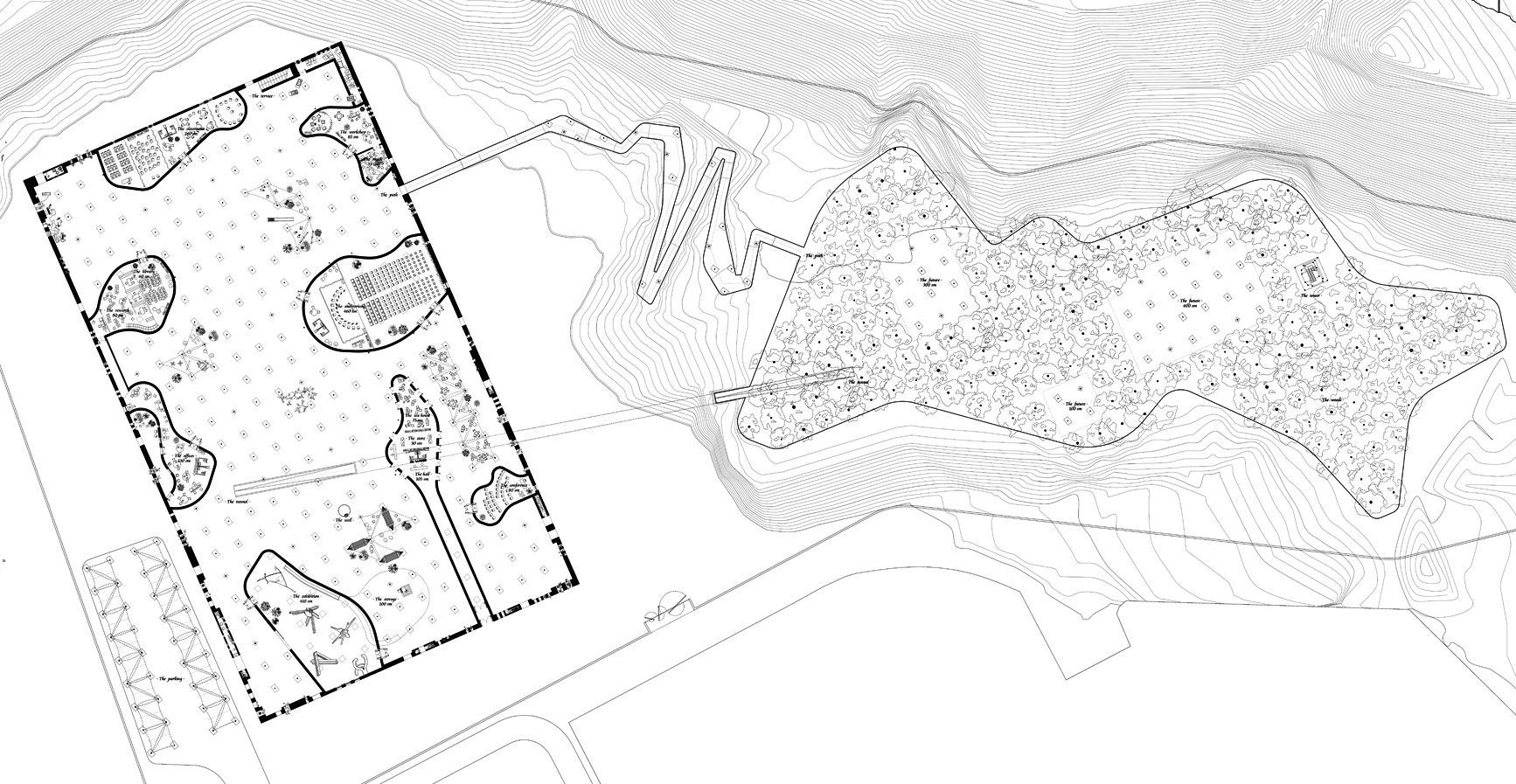 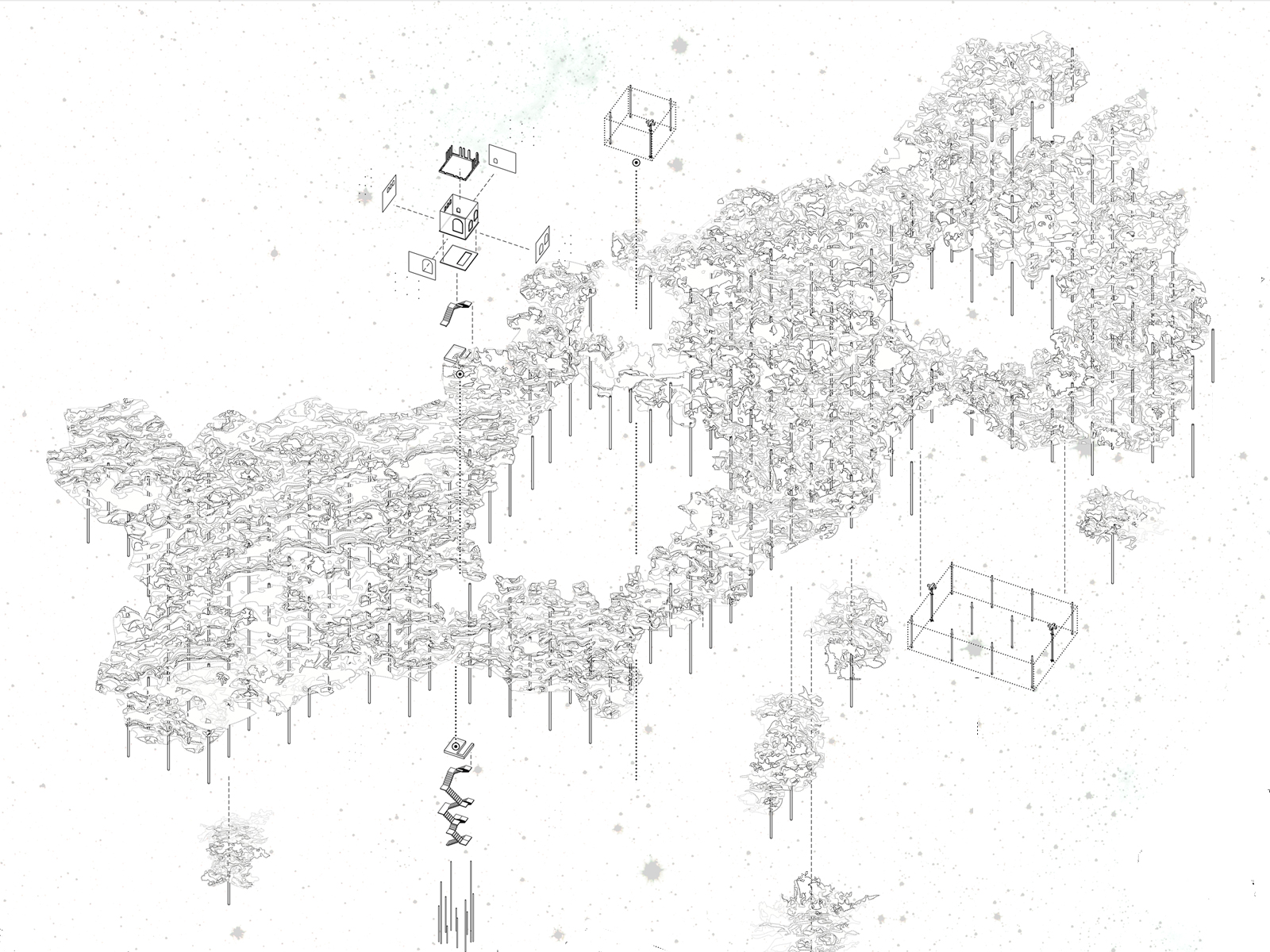 the Woods, the Tower & the Future ↑ 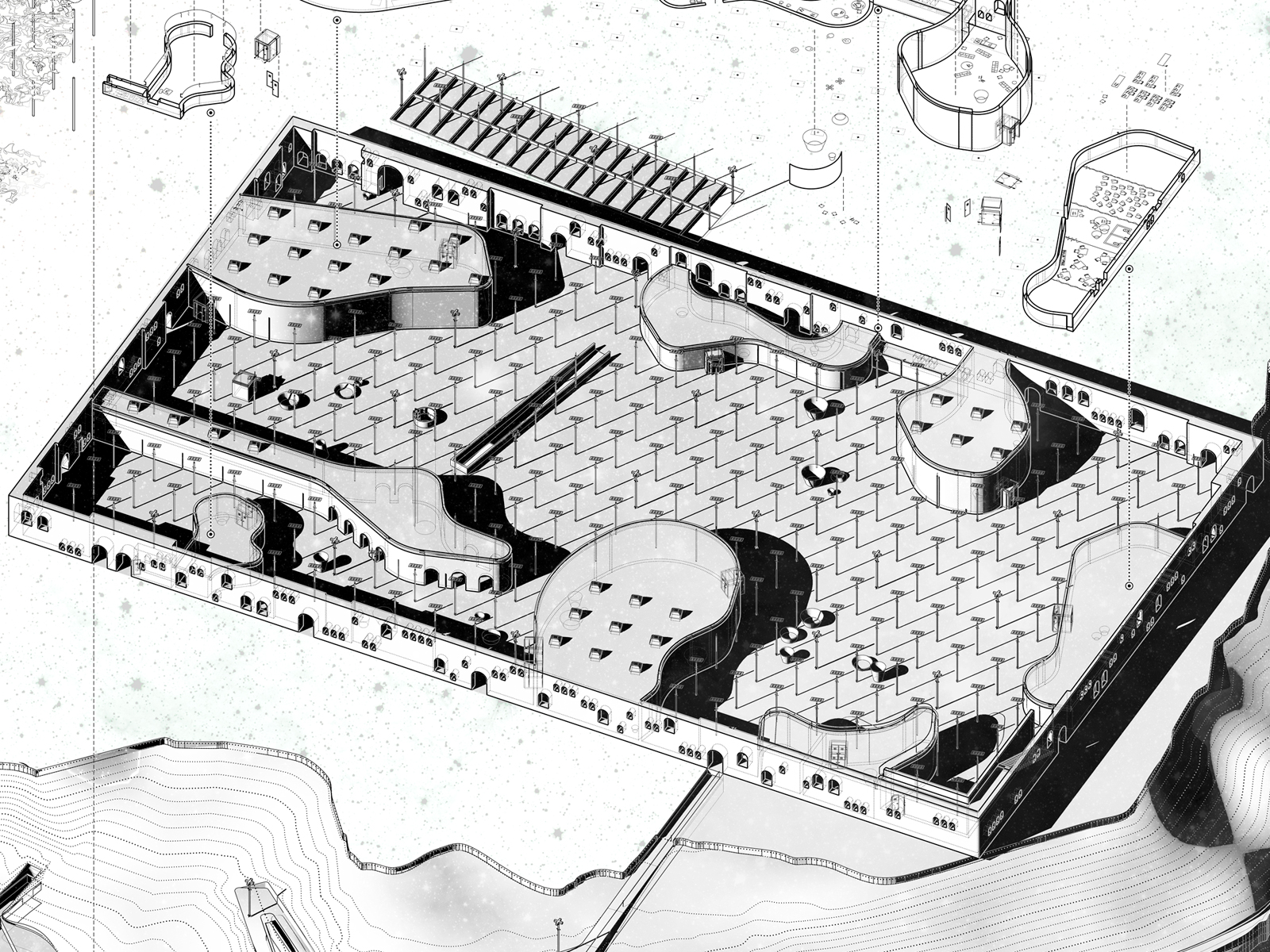 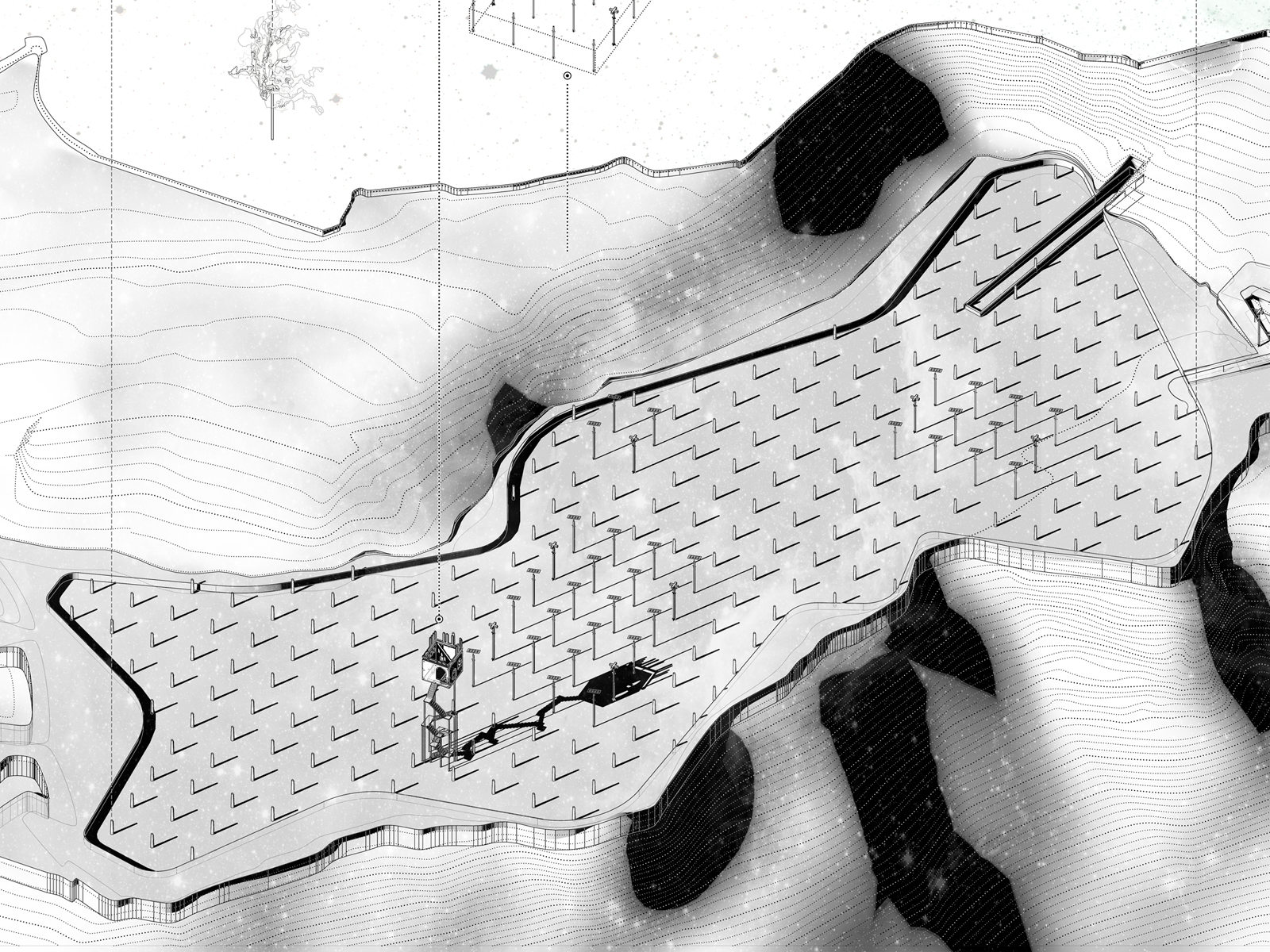 the Matrix surrounds the Watchtower ↑

zoom in the plan:
the Workshop, the Auditorium & the Library → 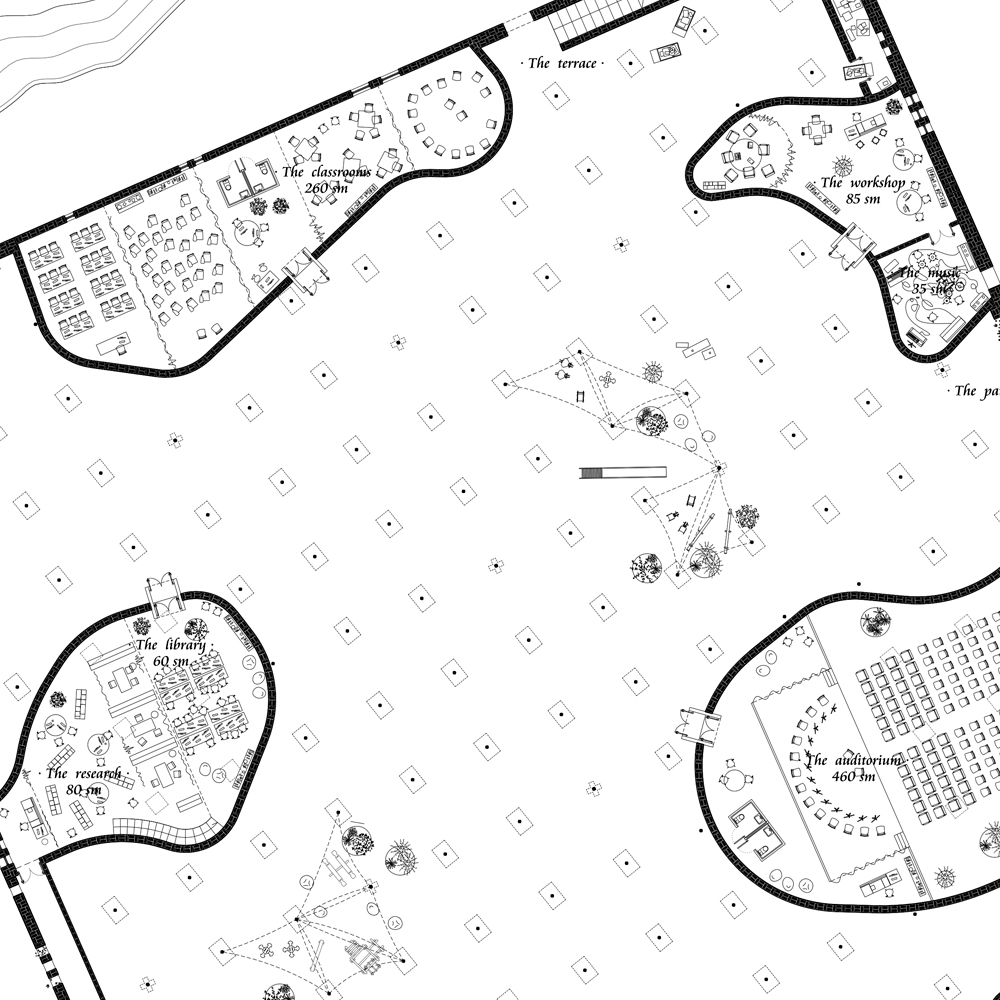 zoom in the plan:
the Exhibition, the Well & the Tea House → 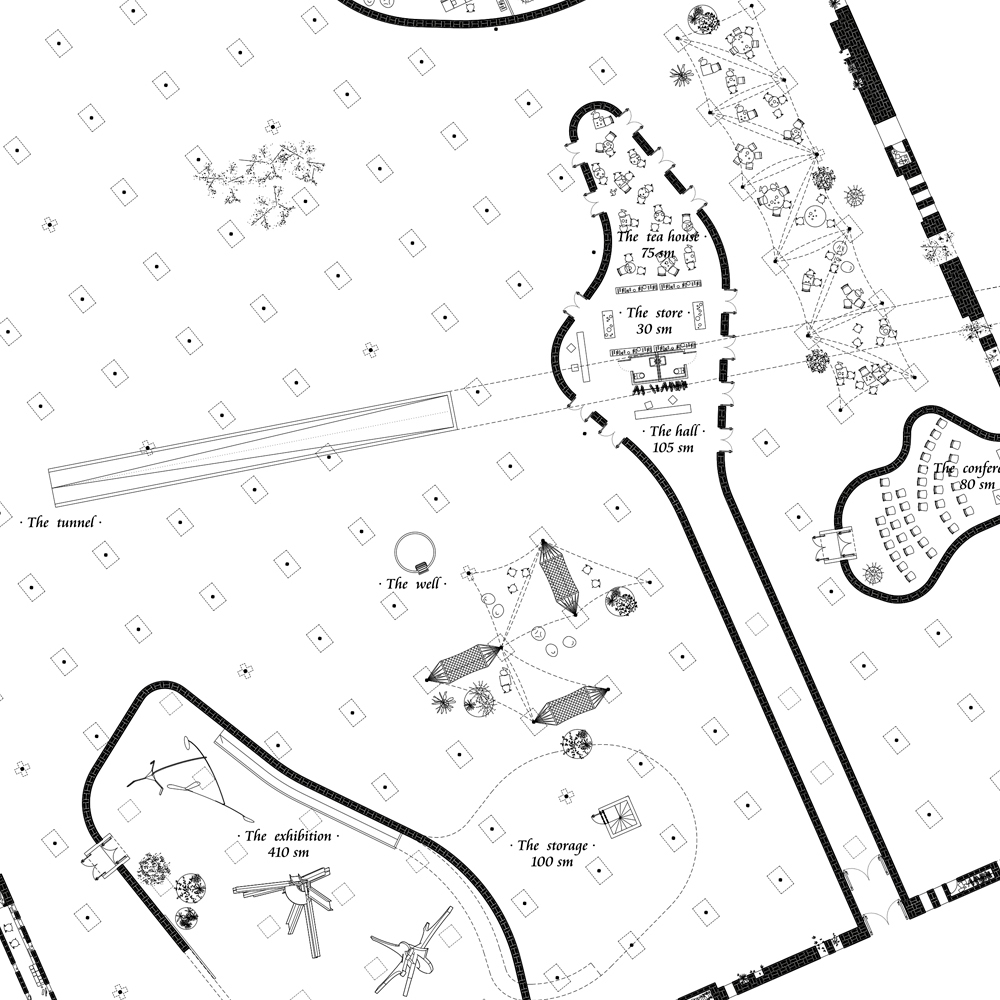 The site is divided in two very different zones: the upper part in the south, where we develop the building program, and the ten meters lower part in the north, where our intervention is landscaping.

In the upper zone, a six meters tall holey wall surrounds a large interior open space. The windows of the wall are shaped in a semicircular arch shape as a re-interpretation of the Buddha Cliff’s holes. In different points of the wall this holes touch the ground, allowing the penetration of visitors, creating constant flows of people between the inside and the outside. Inside the walls, a 5×5 meter matrix organizes the space. The elements that generate this matrix are diverse: solar panels, lampposts and skylights. The building main program is divided in different curvy volumes that appear attached to the wall and break the matrix while the perimeter wall thickness varies to contain little services programs. There are eight main volumes containing: hall / retail store / tea house, conference room, performance hall, workshop / musician performance room, classrooms, library /research / study rooms, offices and exhibition. There is an extra volume underground connected to the exhibition that serves as storage. The volumes get direct illumination from the wall windows and indirect illumination from the skylights. The entrance to any single volume is provided by little cube-shaped volumes attached to their walls with a double door that serves as windbreak. A well that provides water and which position should be determined and a tunnel that connects with the lower part of the site are the last two elements that complete the inside-walls cast.

In the lower zone the perimeter is curvy while the shape of the future buildings is square. The matrix is made of trees that provide shadow and create a large playground for different activities. In opposition to the upper zone well, a tower rises through the trees to the sixteen meters high where it reaches the upper zone wall height. The tower works as an observatory to the Buddha Cliff, becoming a place of reflection and isolation over the tree crowns.

The solar panels of the matrix provide energy. The whole building is made of “pakhsa”, the traditional afghan construction system. It is resistant, local made and provides the thermal insulation needed.

In both the upper and lower spaces the intervention works more as a system than as a building. The perimeter provides a flexible interior space organized by the matrix. Program volumes may change shape, use, they may disappear or increase their number without changing the architecture character of the spaces. Time is just another element in the project. In the traditional afghan Qalahs the construction began with the wall, defining a perimeter in which the members of the clan built their homes. In the Bamiyan Cultural Centre the peripheral wall creates the space where the cultural community of Bamiyan will create their future. 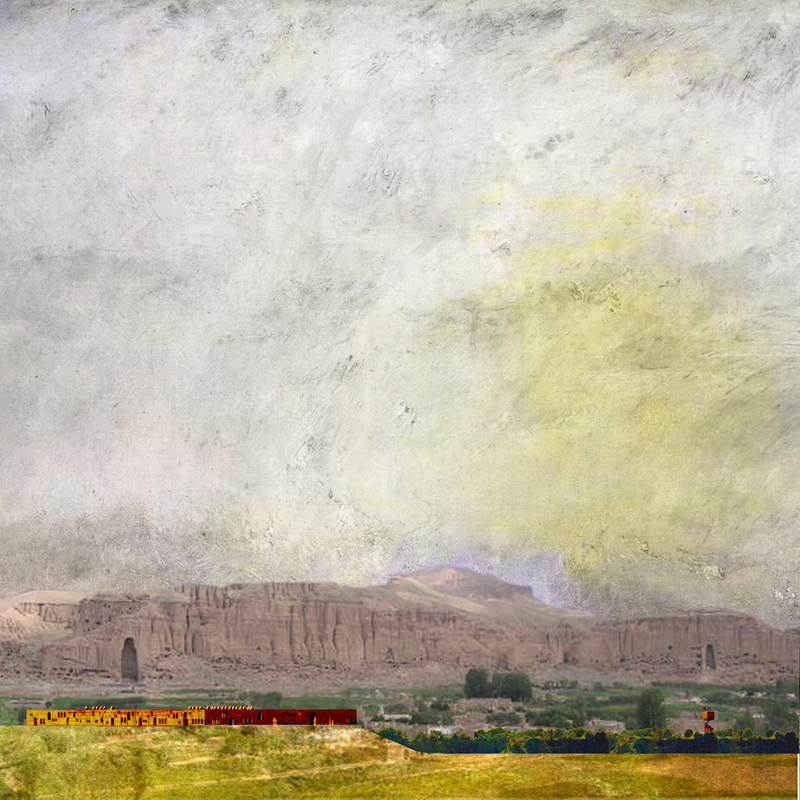 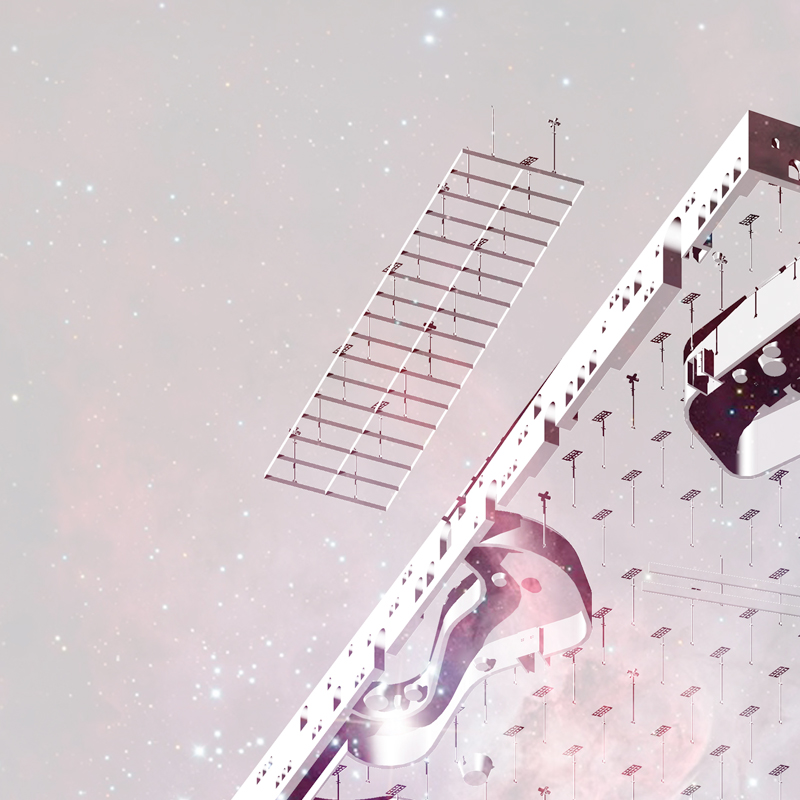 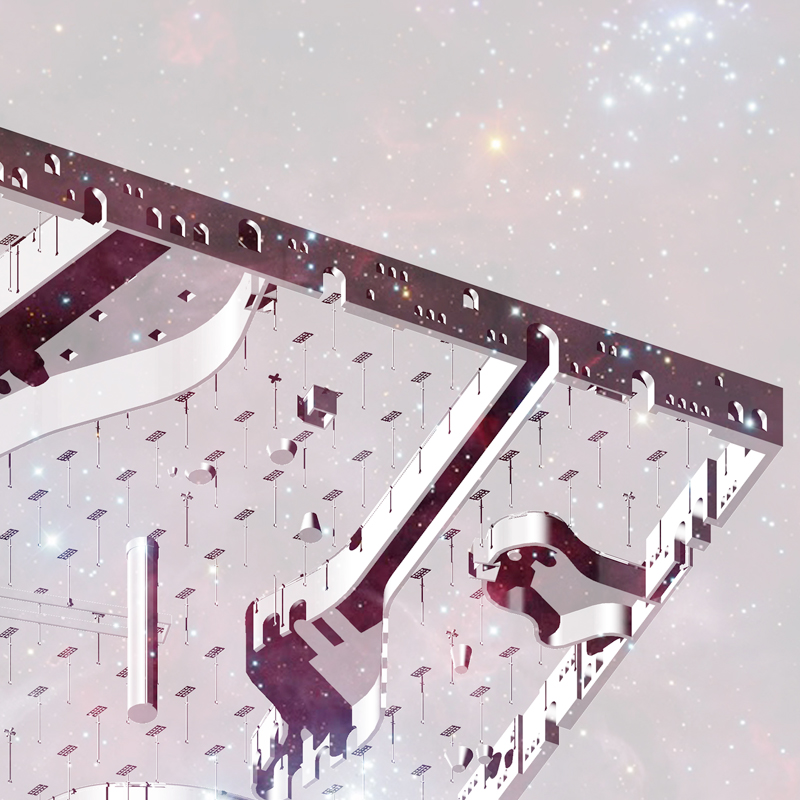 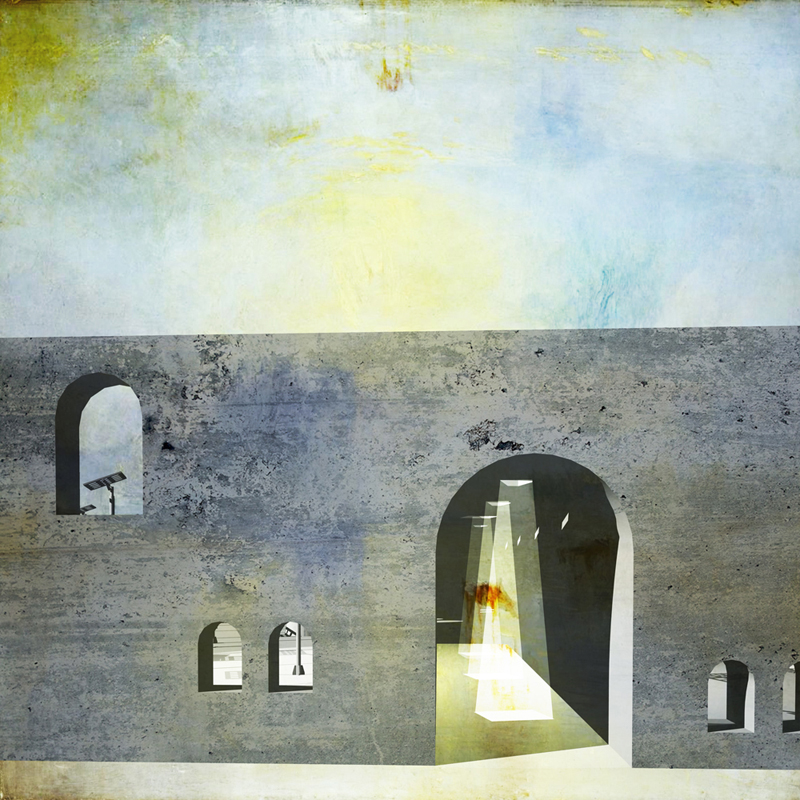 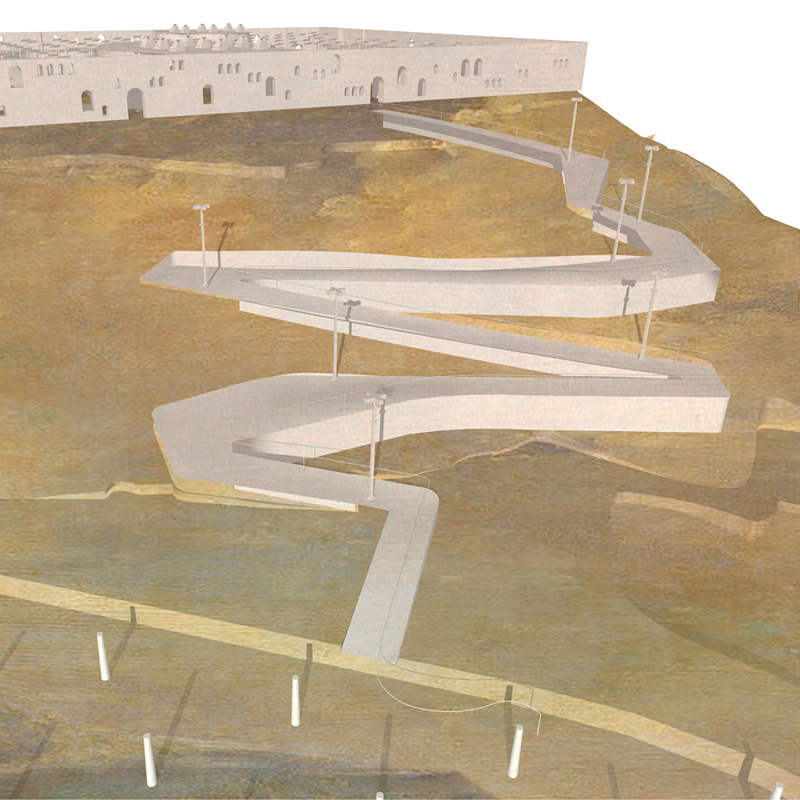 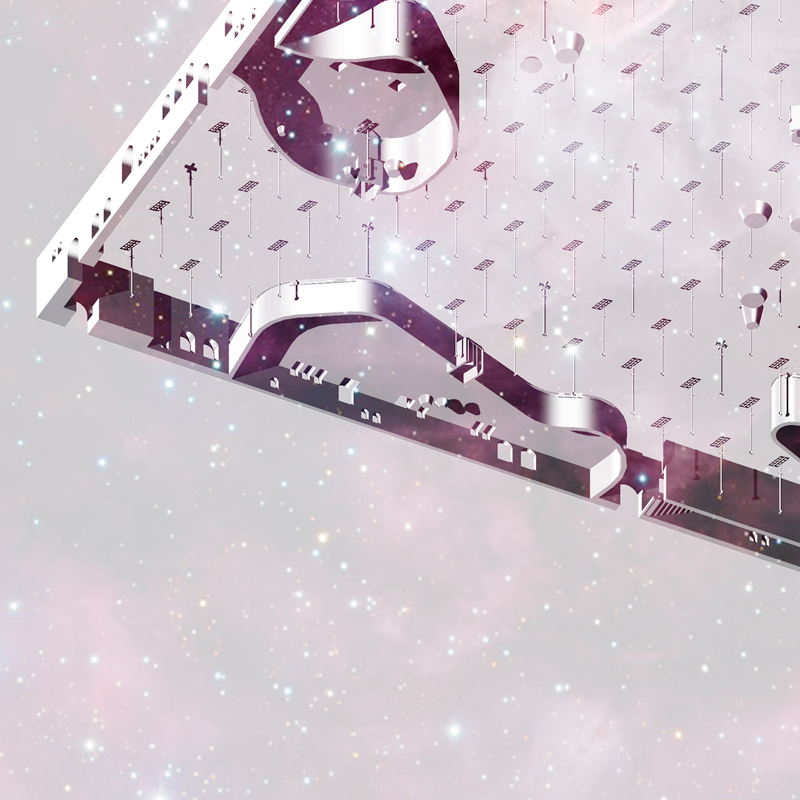 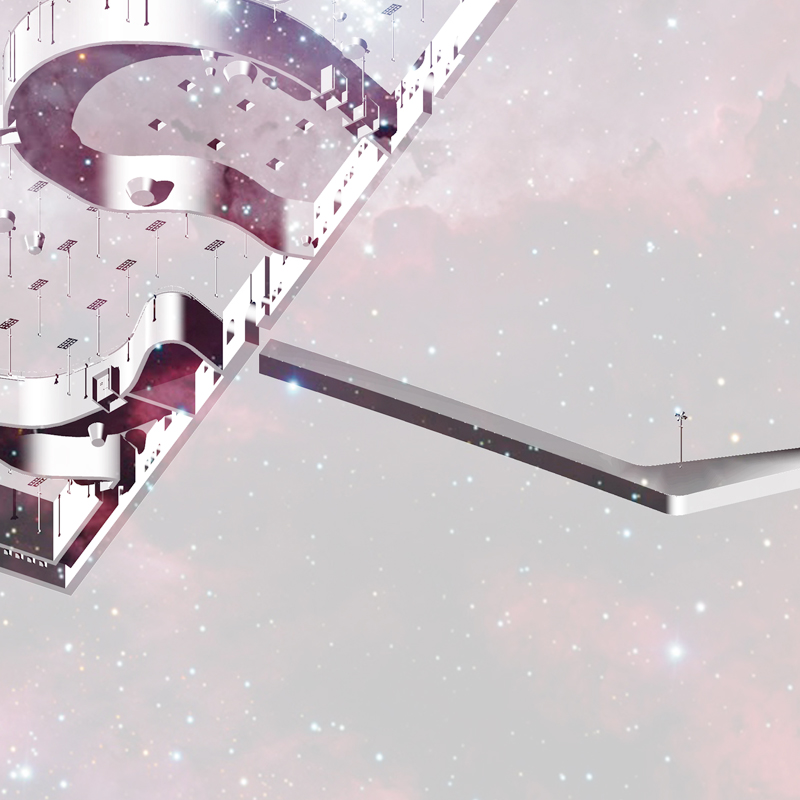 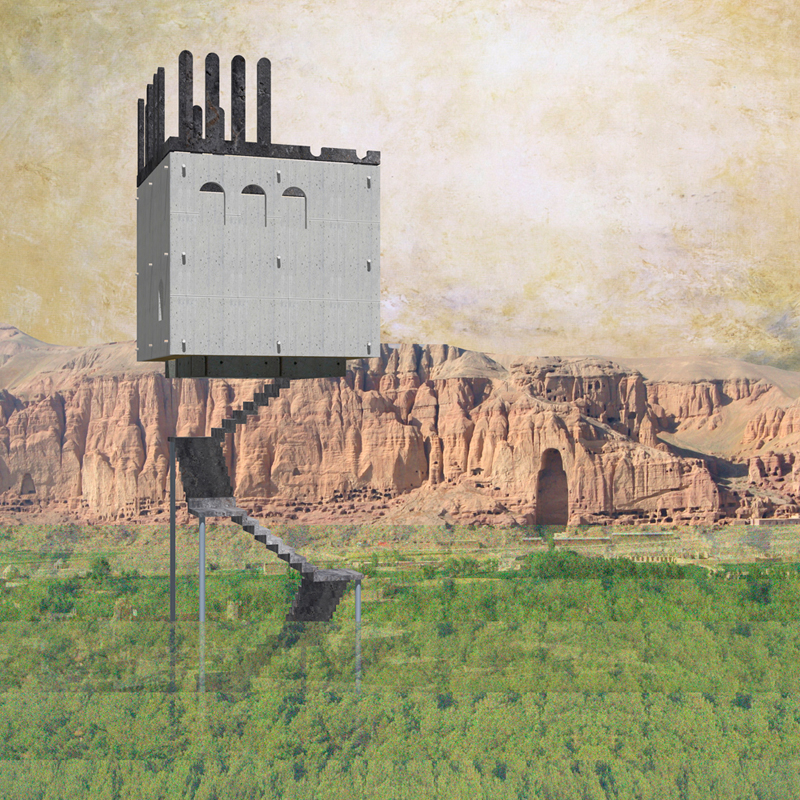 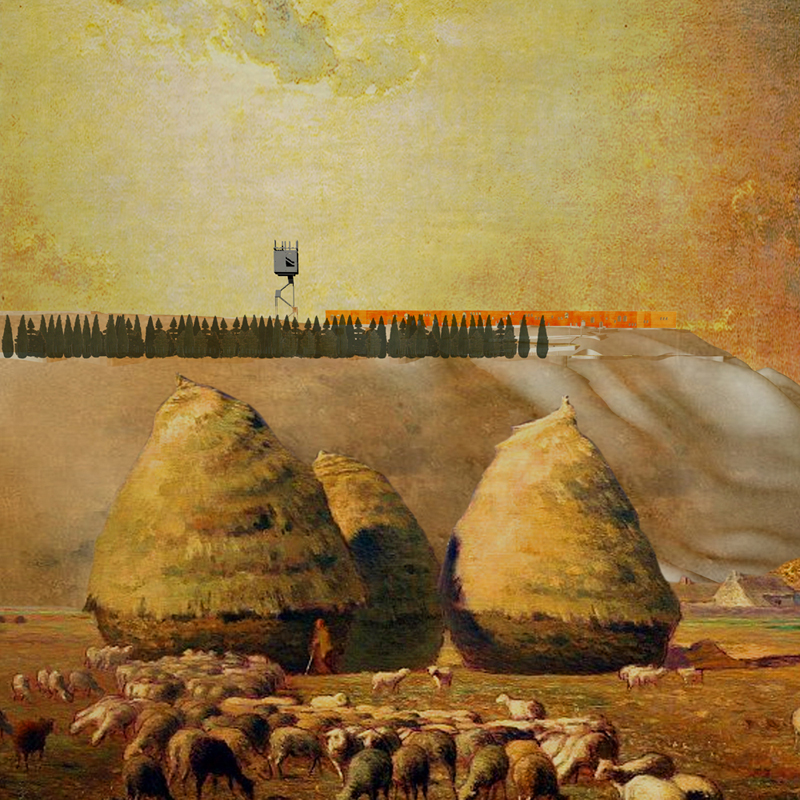 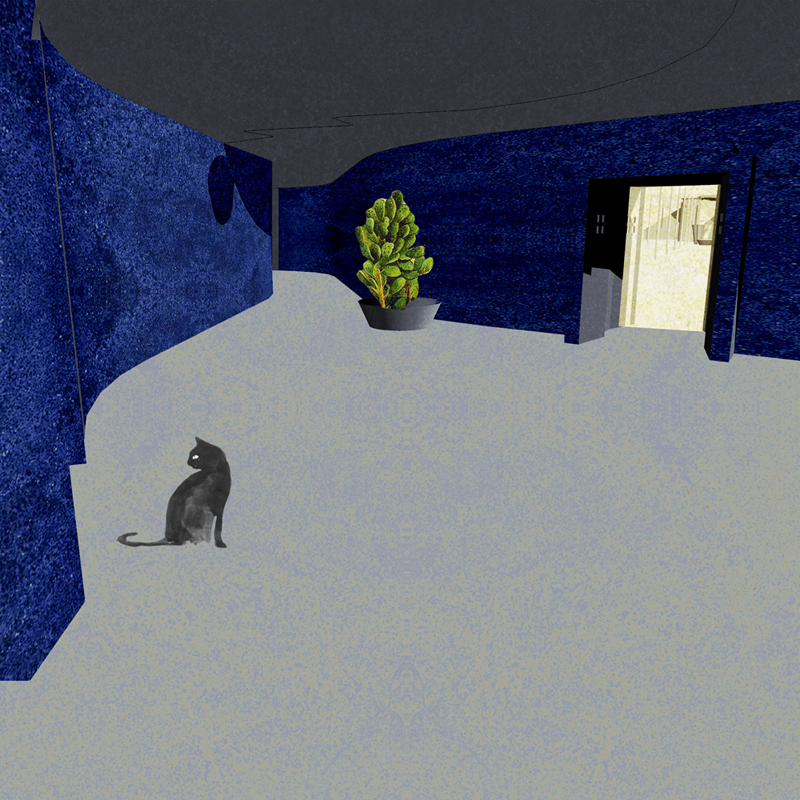 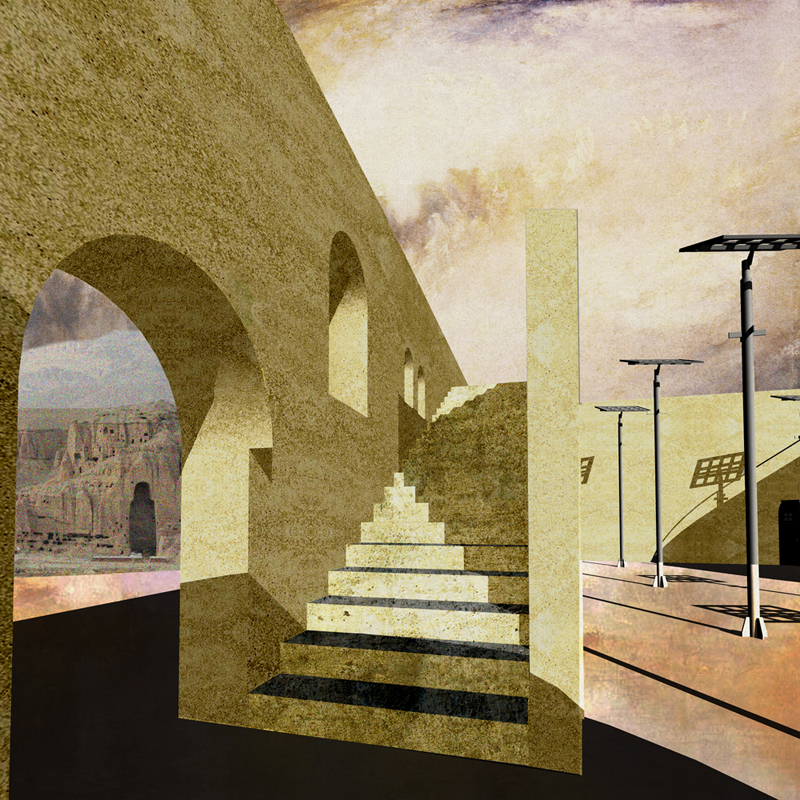 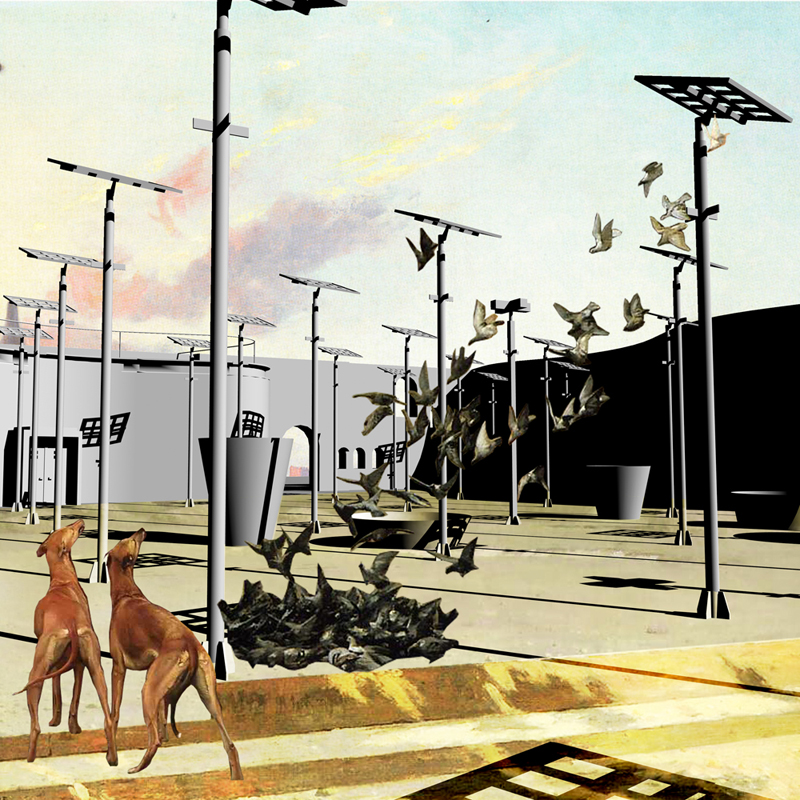 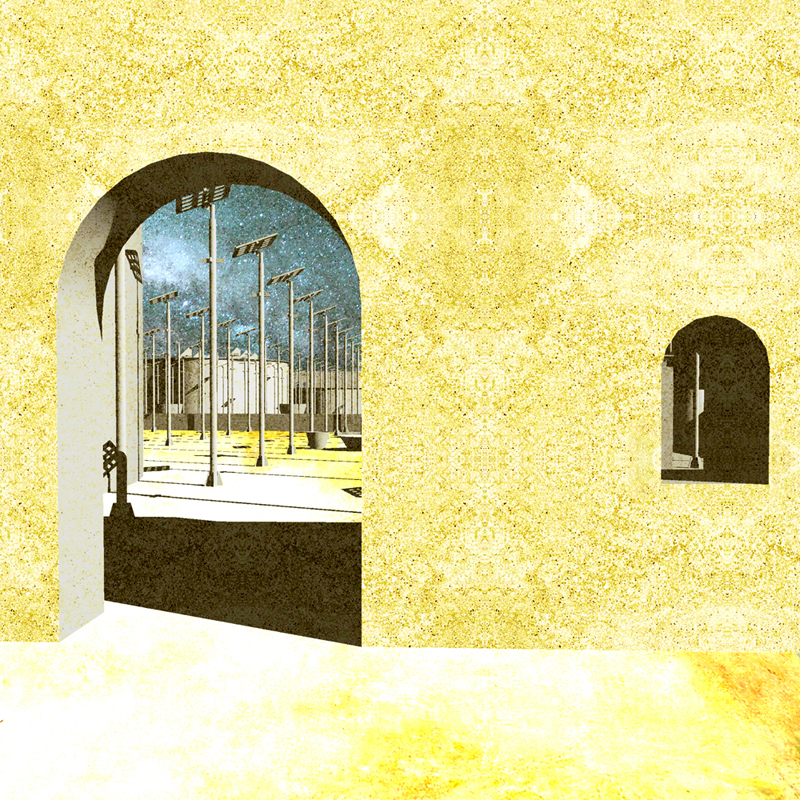 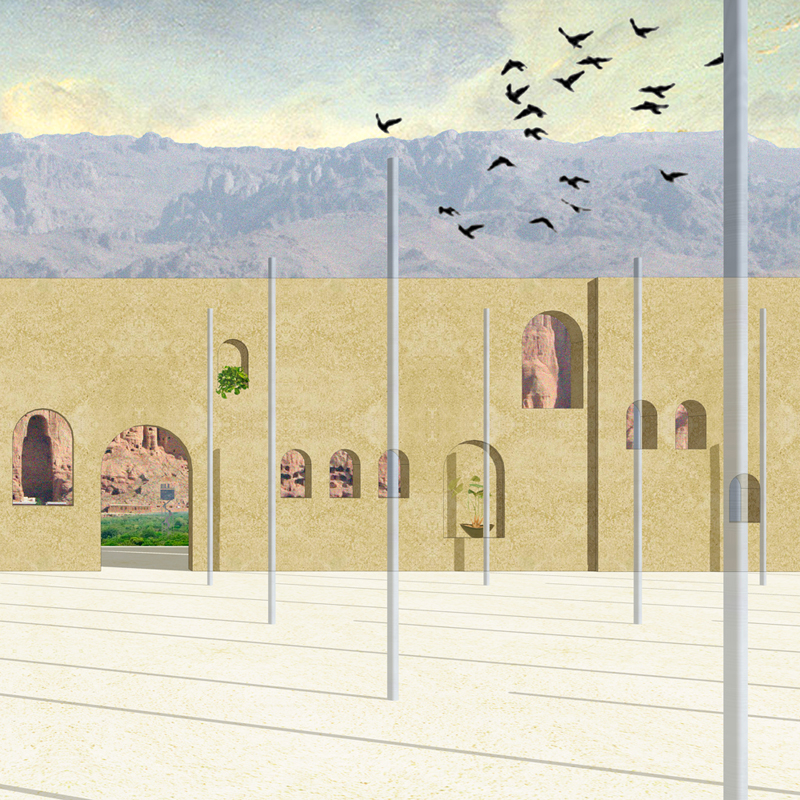