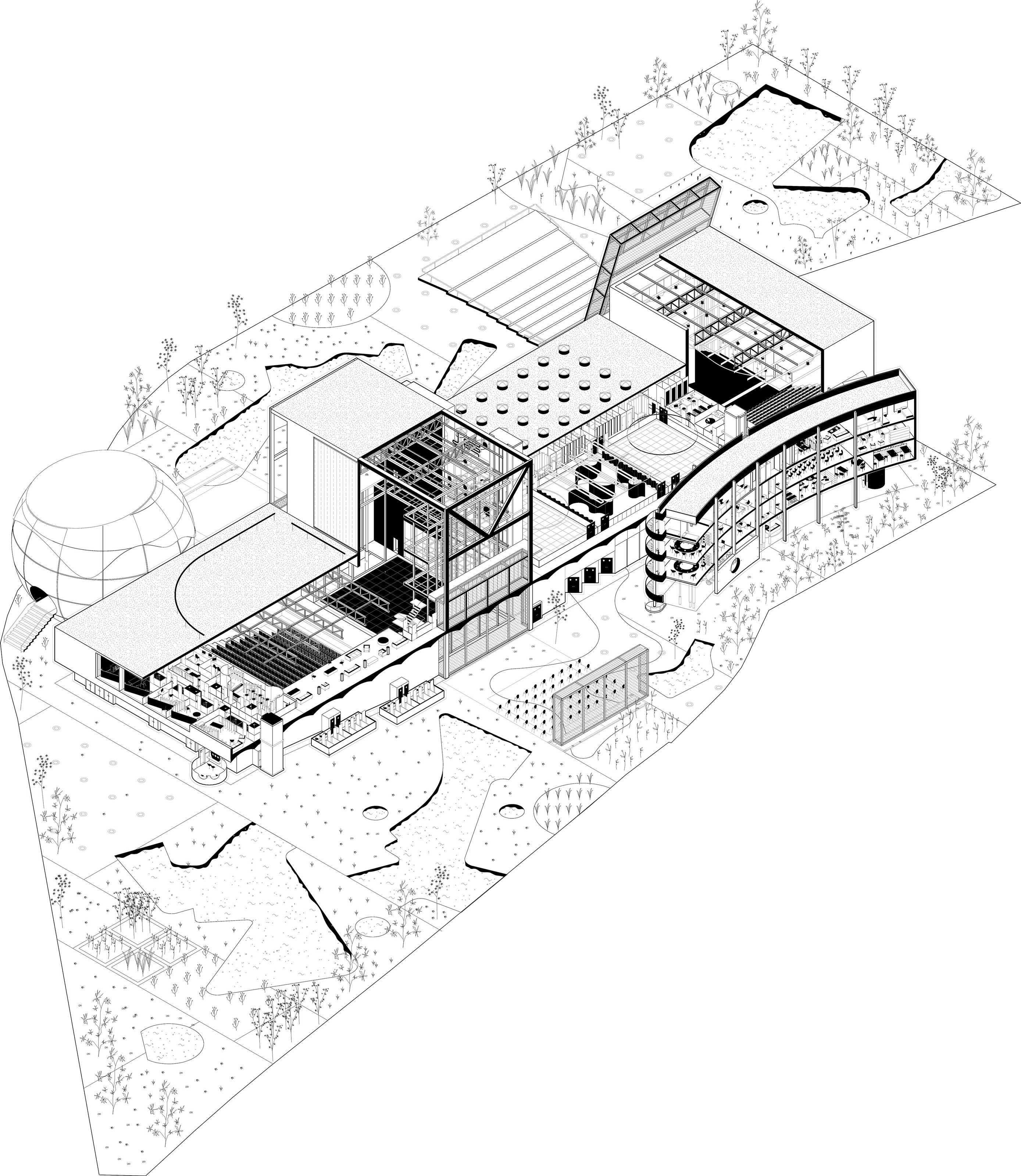 Wrapping the programs with an architectural envelope

The C.E.C.Q. is more a Urbanscape than a building. Its particular functions almost fly as in-gravitate programs over a reconverted and reconstructed public space.

Instead of topping the site with a gem, with an alien object that would be positioned as an sculpture, here we are doing precisely the opposite: We are constructing a public interior and claiming its public ethos as a Urbanscape. As a social context for the citizens of Quarteira. Generating a completely open ground floor which is more a urban space than a building. This ‘enclosed exterior’ would behave as a continuous ground floor level that flows from the entrance, through the Main Hall, in between the Lobby and until the Black Box. All these spaces can be linked and opened to each other, generating an enormous public open space than can be use for both representations as for a kind of Interior Domestic Plaza. Such a concept aims to provide a public open reprogrammable vast space that can almost host any public function.

Instead of just proposing a container of the required functions. Instead of designing an isolated object that would host all the necessary programs for the C.E.C.Q. Here, we are giving something more. We are using the physical materialization of those programs to organize an scheme that would free the ground floor, almost flying suspended over an artificial topographical level, providing citizens a space for gathering, dialogue, pop-up events, social interaction and cultural production.

Therefore, the required functions for the C.E.C.Q. hall become the shelter, the envelope, the volumetric roof for such public space. 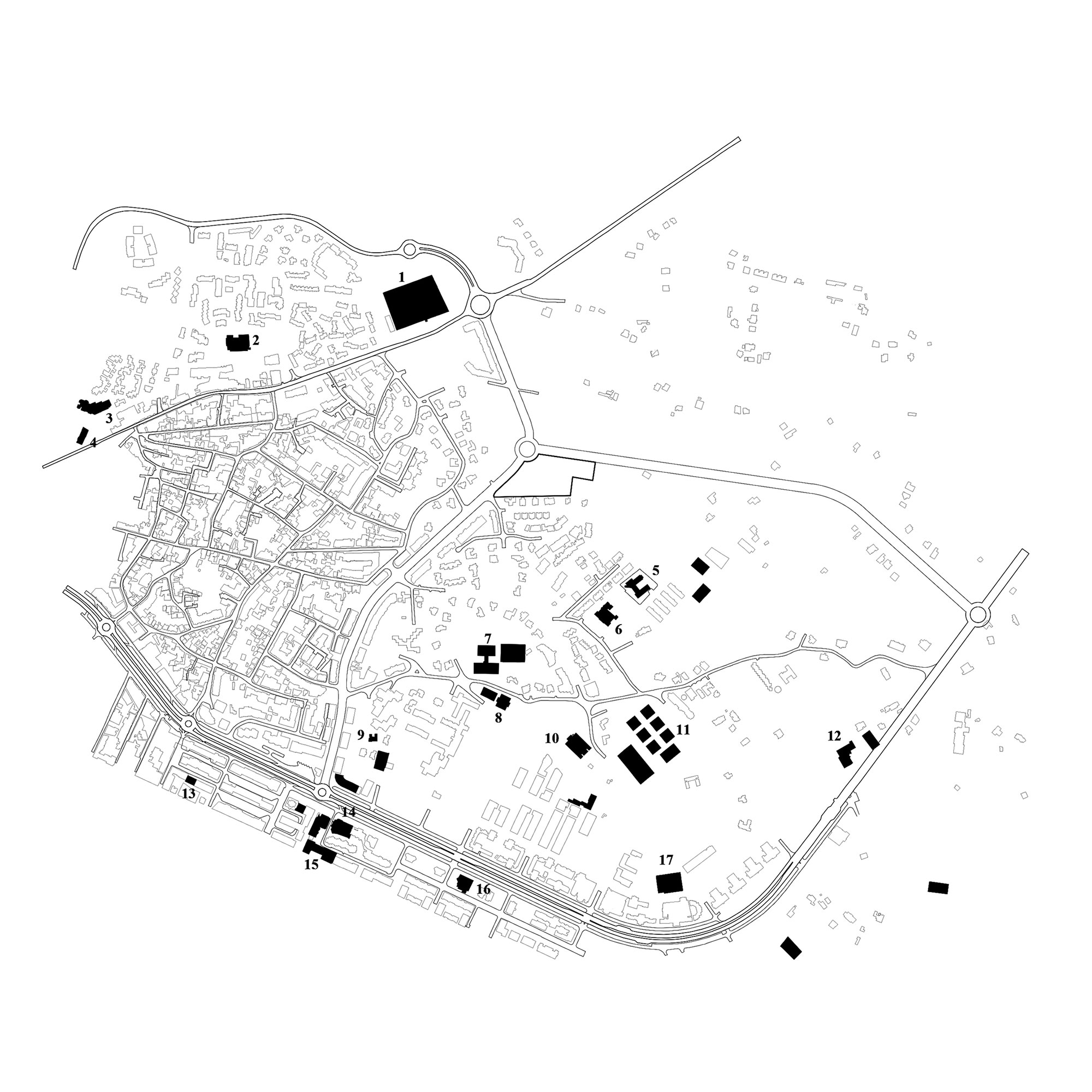 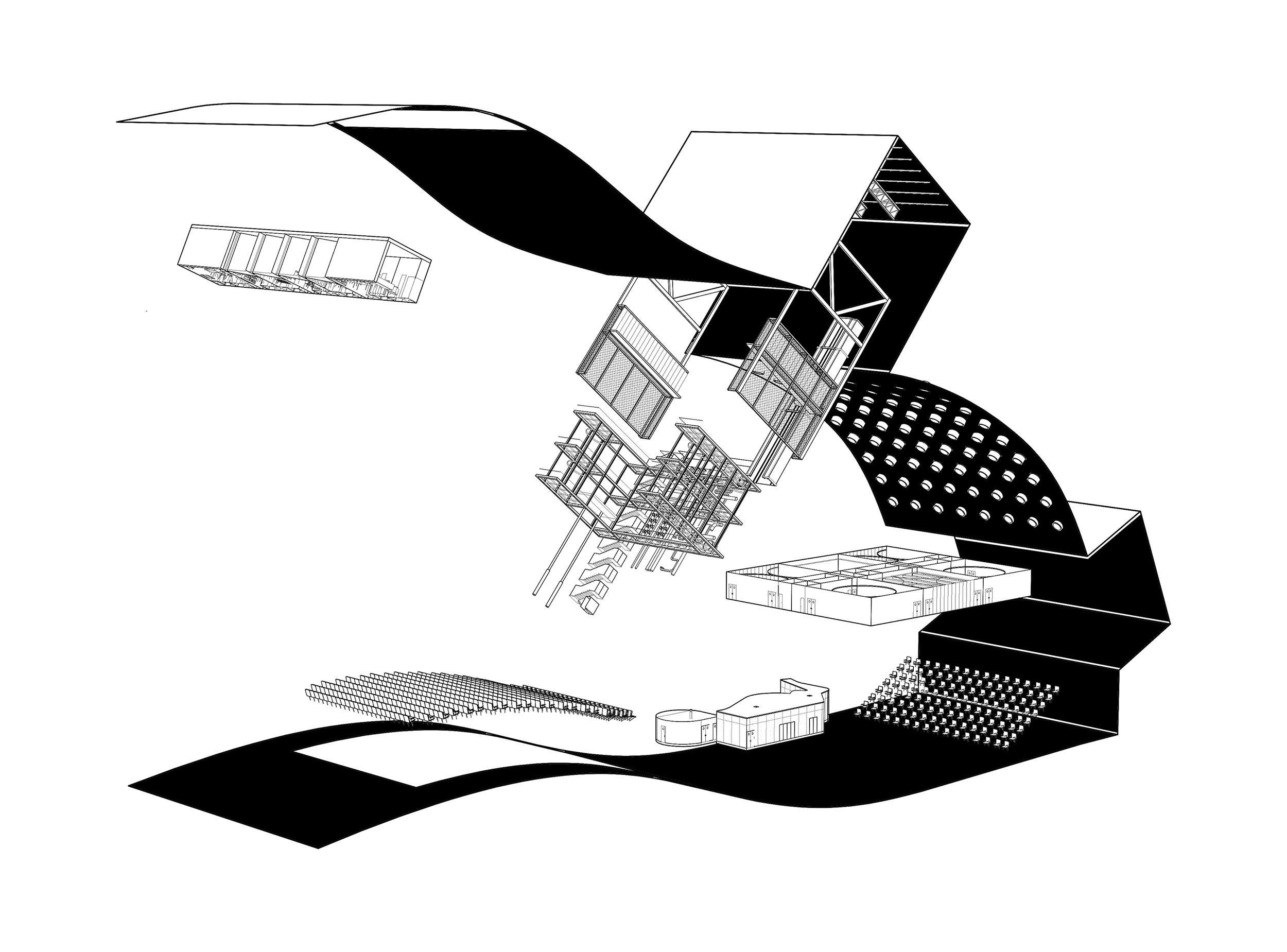 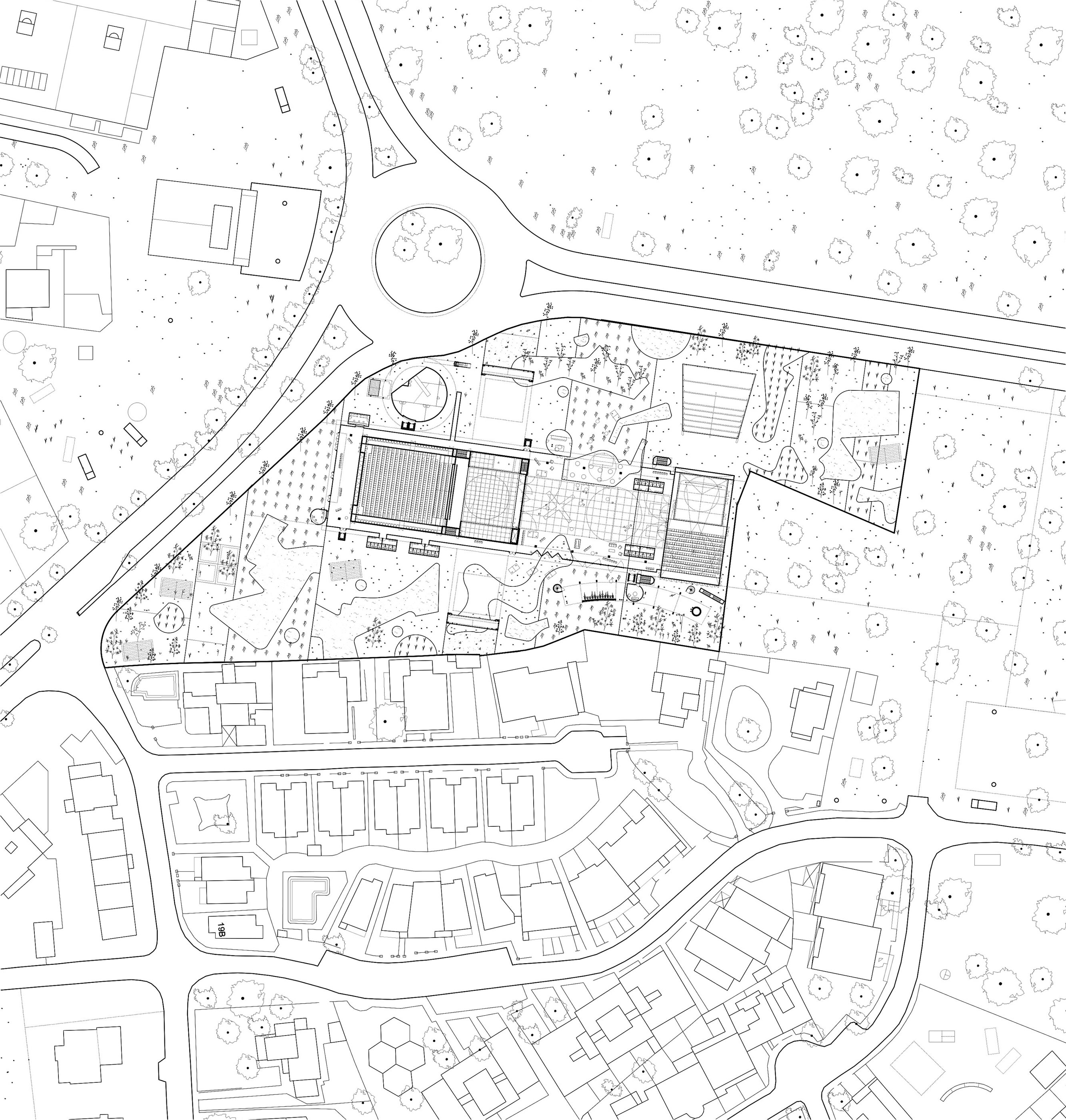 The project is more a ‘Device‘ for social congestion than a mere building. As it has the capability to trigger the necessary functions that would construct cultural, social and metropolitan contexts surrounding its main program and extending it to further realms.

The CECQ is nor a plaza nor a building but something in between. A place amid urbanism and architecture. A common framework for social gathering, cultural exchange and dialogue. The construction of a continuous ground floor public level which is sheltered under the cover of the functional programs for the CECQ. 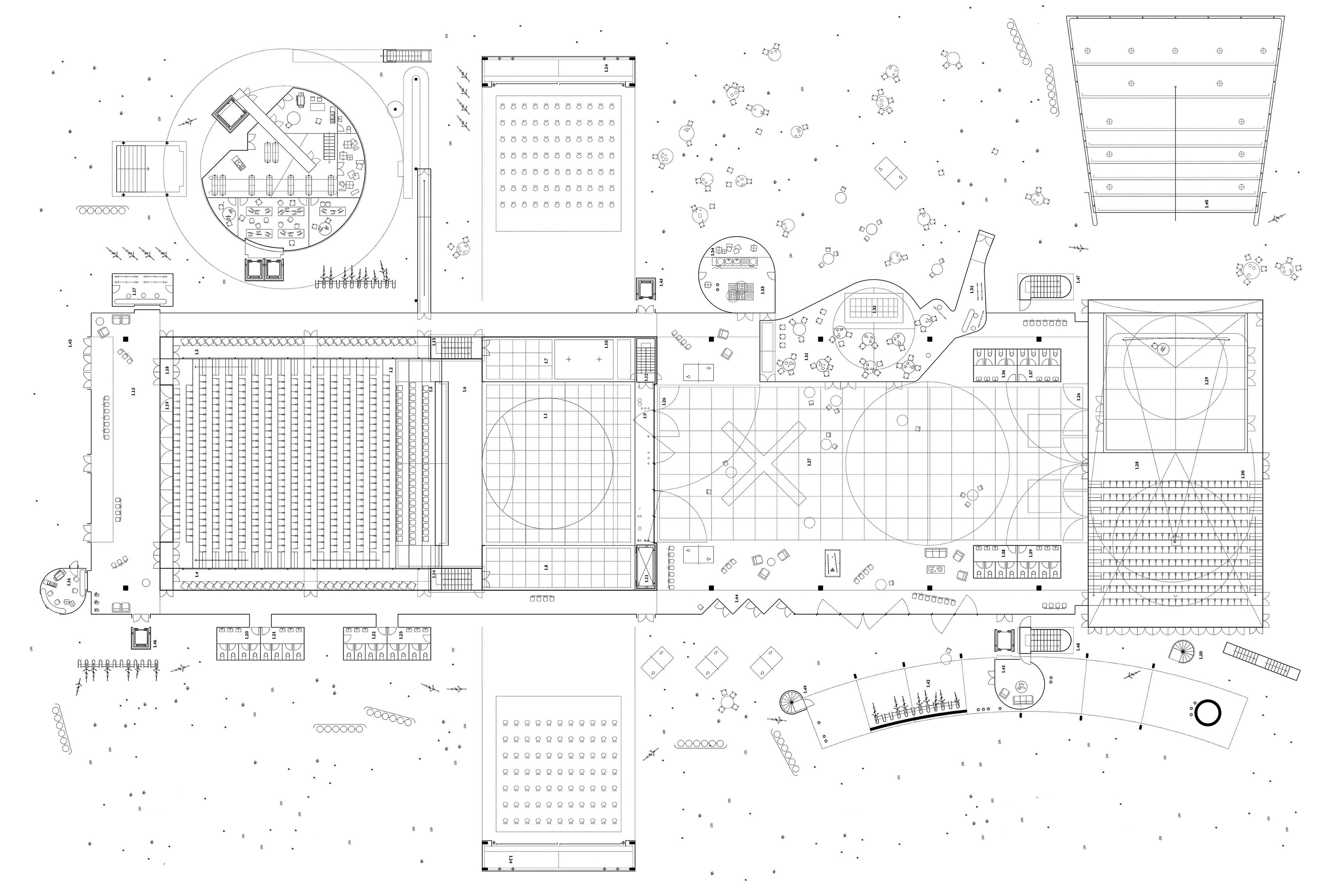 The Layout of the Device

The project follows a clear layout that distributes the most public and private uses on two different levels. In such a way that the ground floor, with easy access, organizes all public uses, while the upper floor, compact and optimized, concentrates the most private or restricted uses. As if they were two intersecting buildings… from two architectural systems that arise when a mass of private uses defines the skin, the shelter for a Large Void, a large emptiness that host a series of public uses.

Thus, the programs of the cultural center: the two event halls, the concert cafe, the public services and the library are located on the ground floor.

In a basement level, within a footprint that corresponds to that of its upper levels, 3000m2 of vehicle parking are distributed. This buried level communicates directly with the scenes in both rooms. Especially with the loading/unloading area of ​​the Grand Hall, whose technical system allows to raise from the hangar in the basement to the stage large elements, stage sets or musical equipment.

Given their schedule differentiated use, the admin offices of the entertainment center, the offices dance school and the artists’ residences are located in adjacent curved volume. The independence of this volume allows access at specific moments as well as an energy efficiency of the use of a very small volume for these programs. 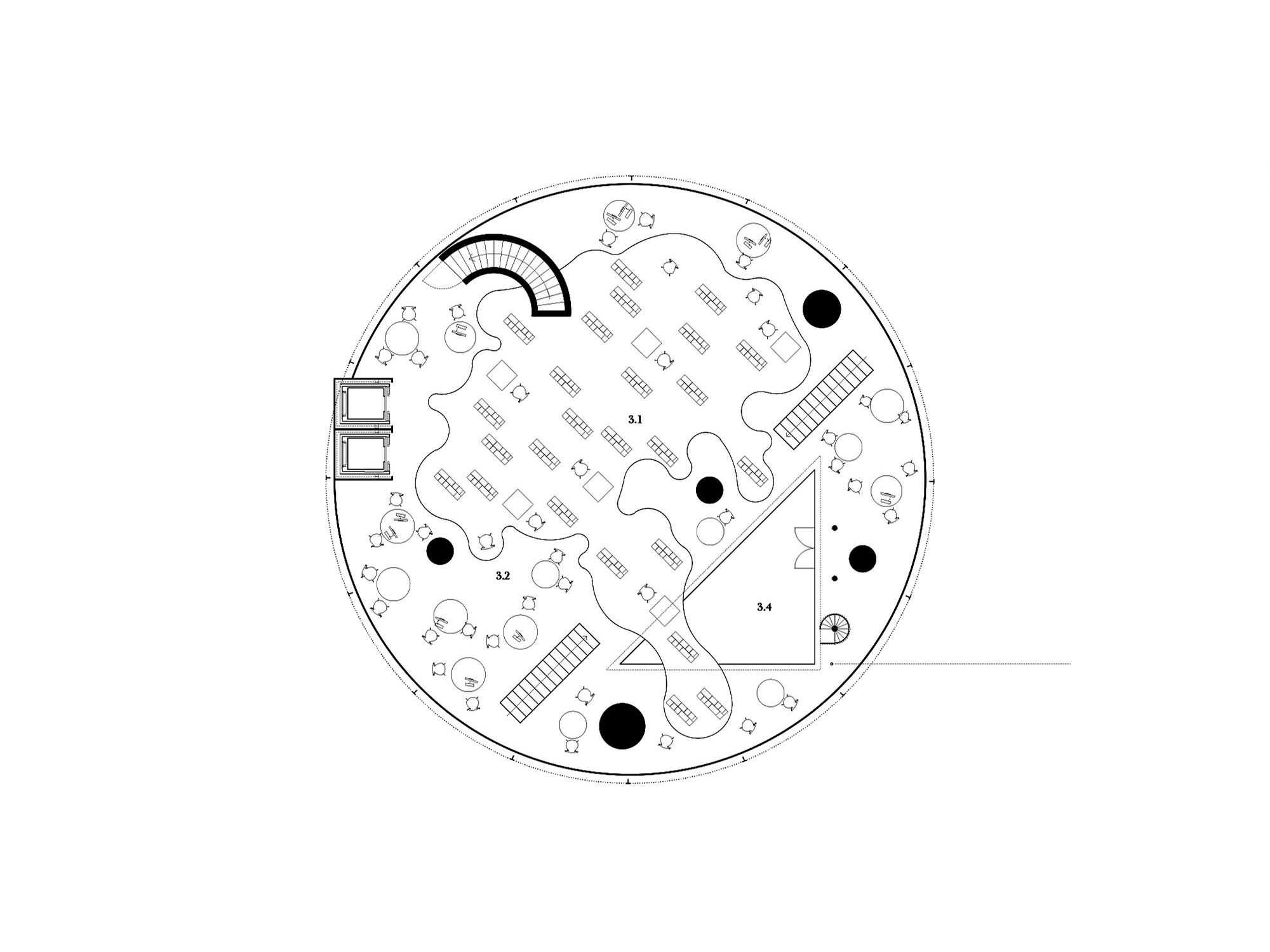 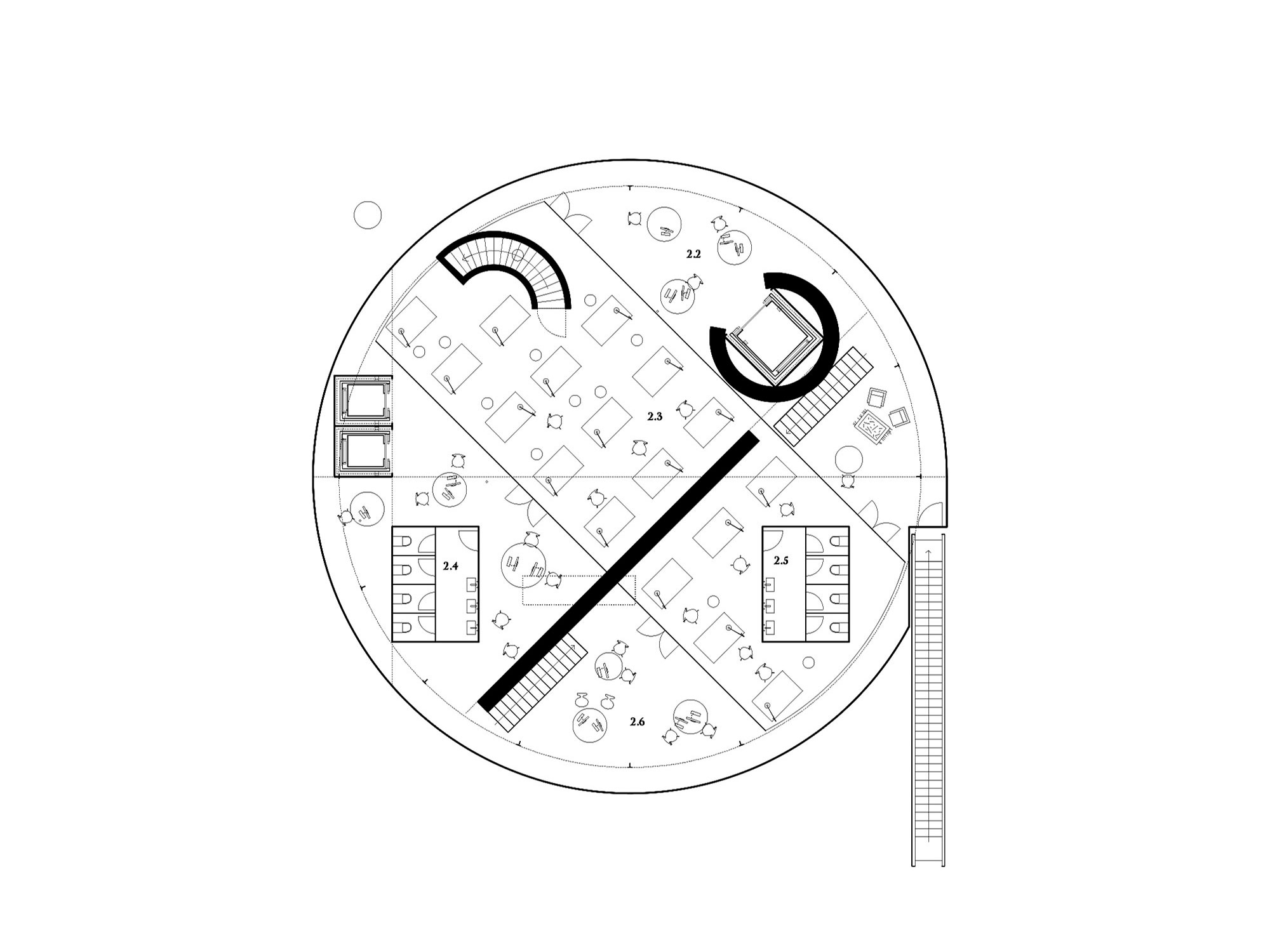 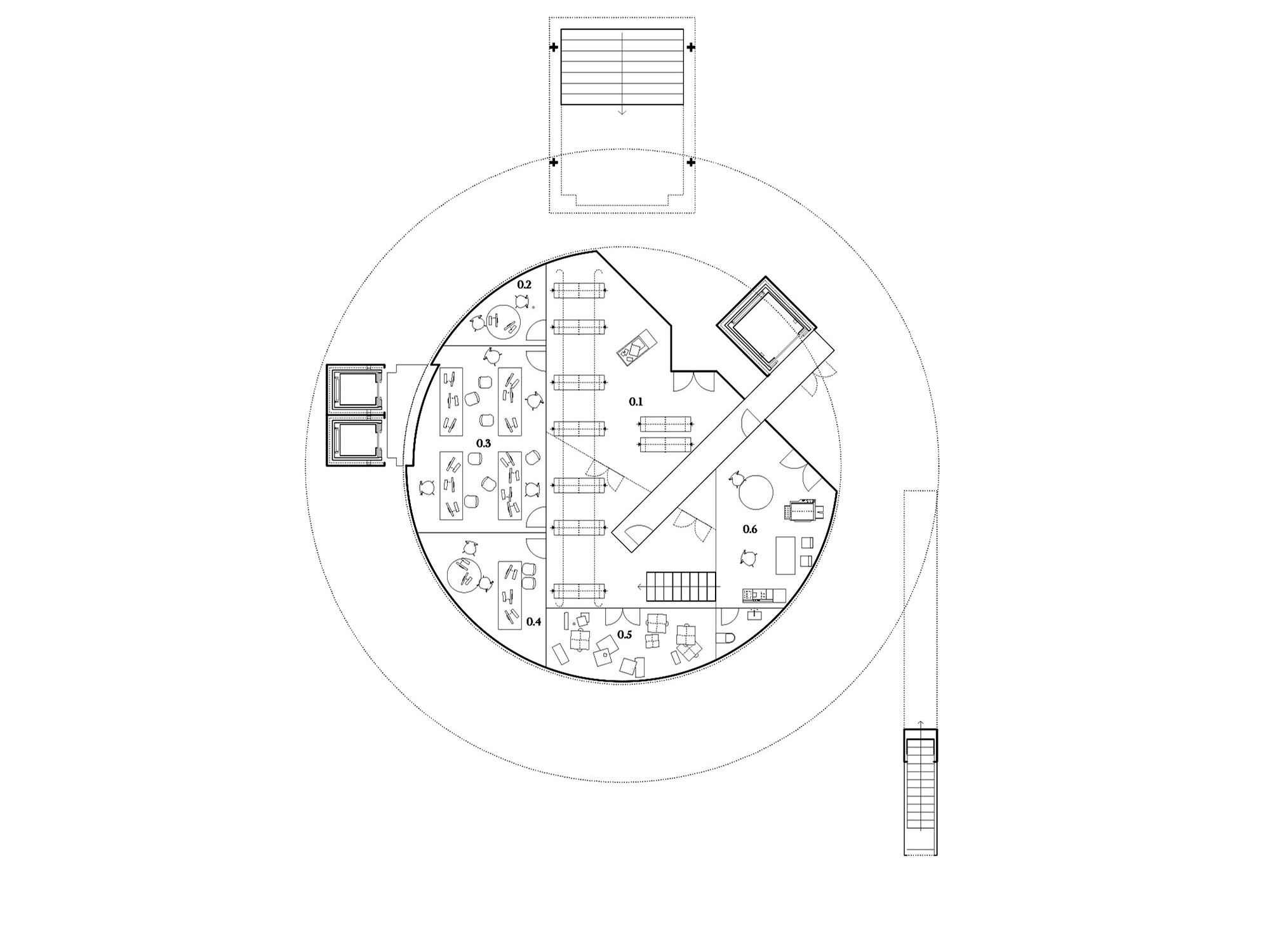 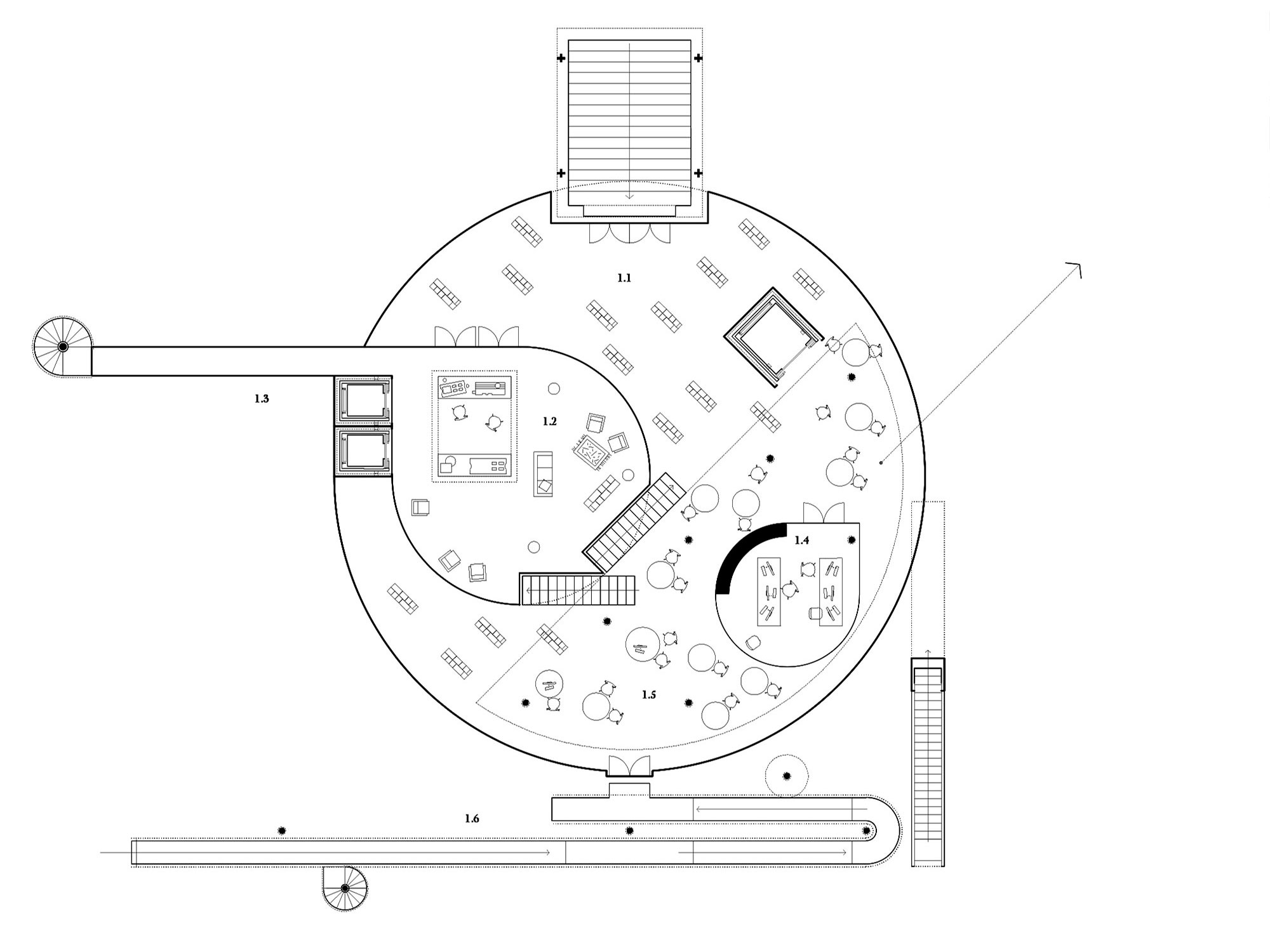 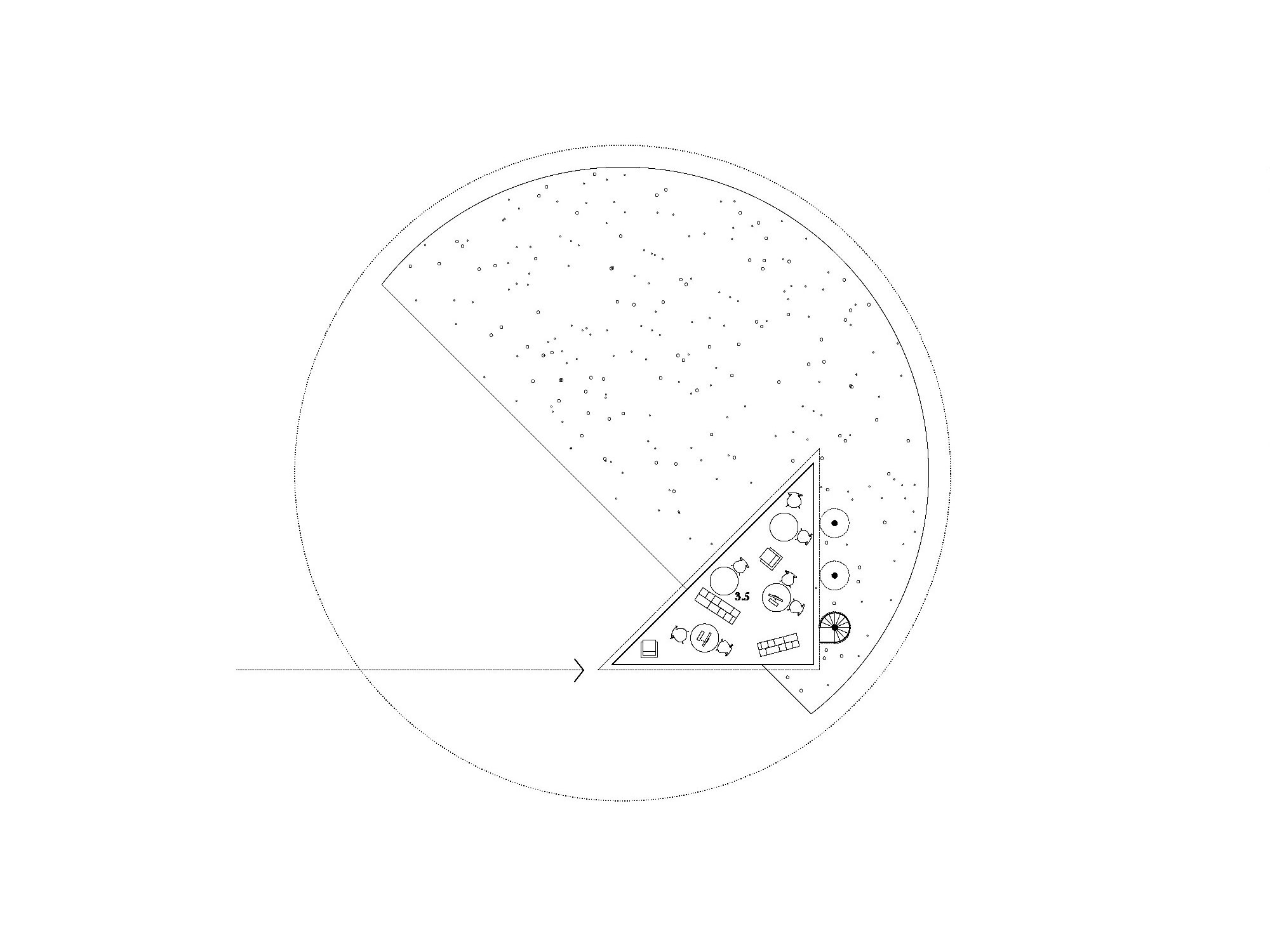 The library, as a use that will be established in the future in a second phase, is located in a spherical volume that completes the composition of the architectural ensemble. This volume also stands out as a singular piece that, due to its shape, is identified as different, facilitating or independence of the set but maintaining a direct connection with it.

Volumetrically the CECQ distinguishes four elements: the main building, the offices, the library and the basement parking.

The organization of the uses in specific volumes allows to optimize the use of the different programs at different times as well as the coordination of the project for its development in three construction phases.

In such a way that the Entertainment Centre and the Dance School are located in the main building. The administration and artist residencies within the adjacent Curved Appendix. And finally, the library will occupy the spherical volume tangent to the CECQ. 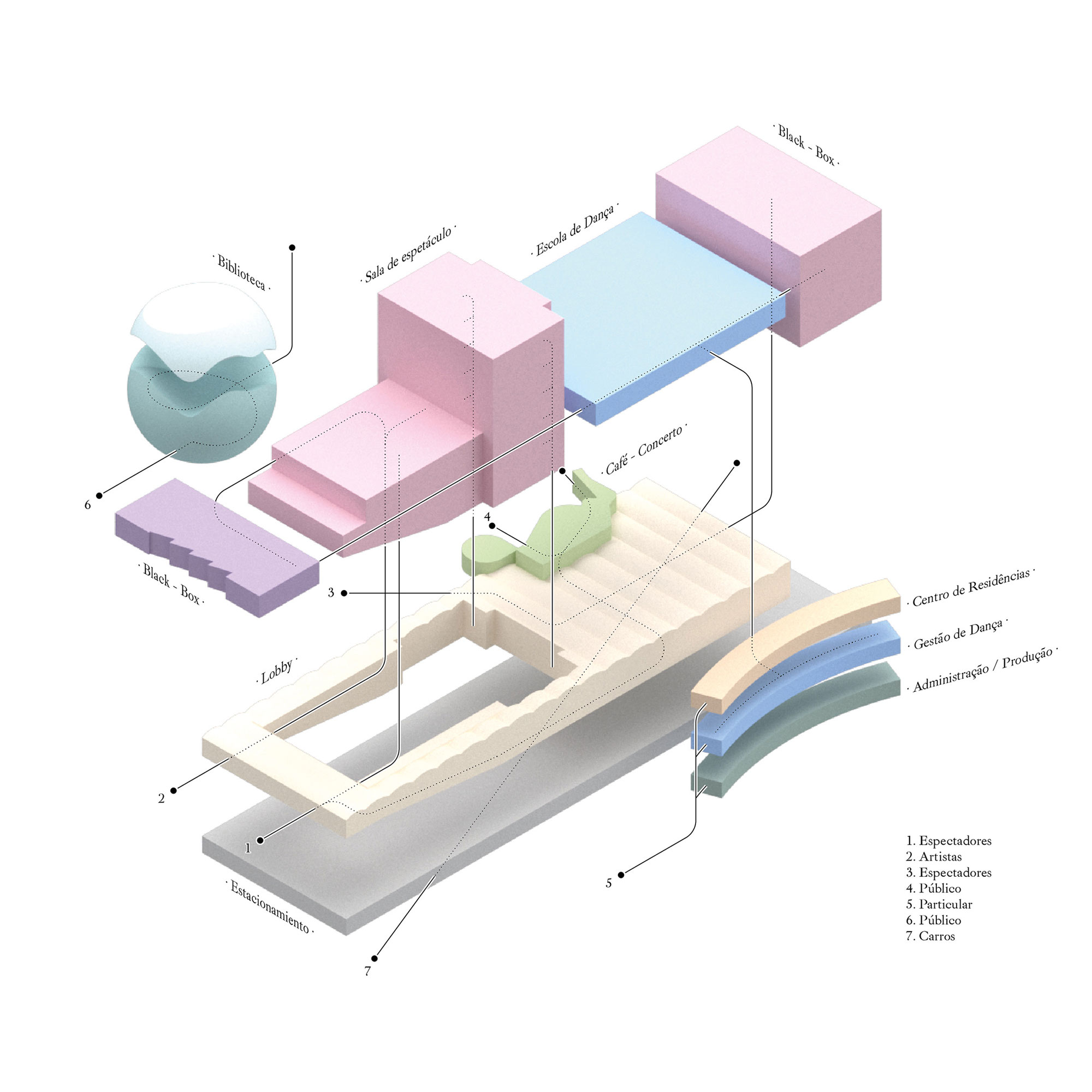 I went to bed last night

and my moral code got jammed

I woke up this morning 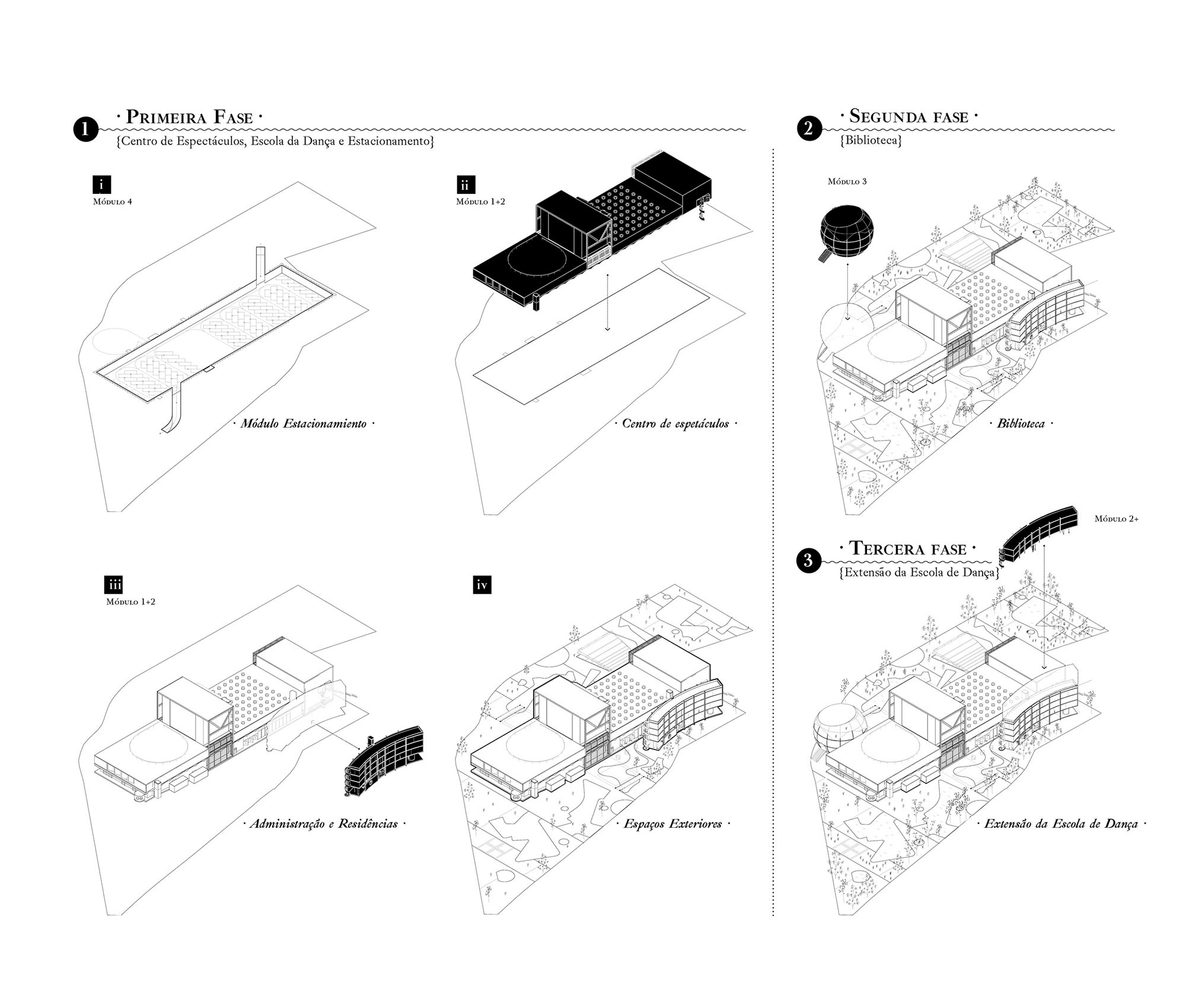 In a first phase, the uses of the Entertainment Center, Dance School and Parking will be implemented.

The excavation necessary to carry out the foundation of the main building facilitates the location of an underground parking, with areas for storage and loading/unloading throughout the lower basement level of the main building. The structure of the two main Event Halls articulates that of the volume of the main building, serving as a vertical support for the horizontal volume that constitutes the CECQ. As an annexed piece, a simple and curved volume that houses the administration offices and residences is set out on the south side of the building.

This first phase culminates with the construction of a series of urban spaces that convert the surrounding environment of the building into an urban plaza, a public garden that connects with the CECQ and is activated in relation to the uses that take place inside it. .

The second phase of the project includes the construction of a library in a spherical volume adjacent to that of the main building.

Finally, during a third phase, the functional program of the dance school will be expanded. To economically optimize this expansion, it is proposed to locate it as a vertical extension of the volume of offices and residences. 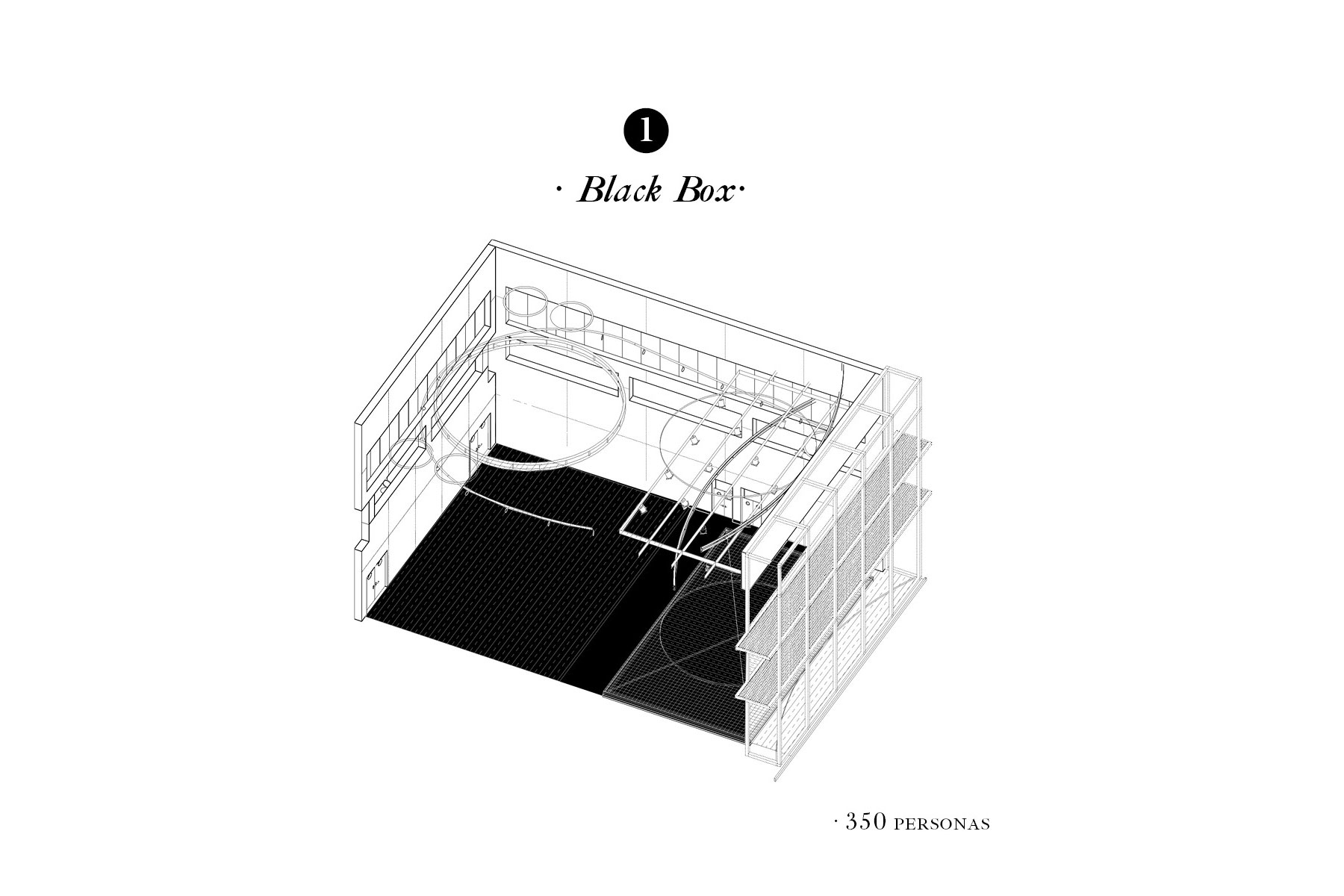 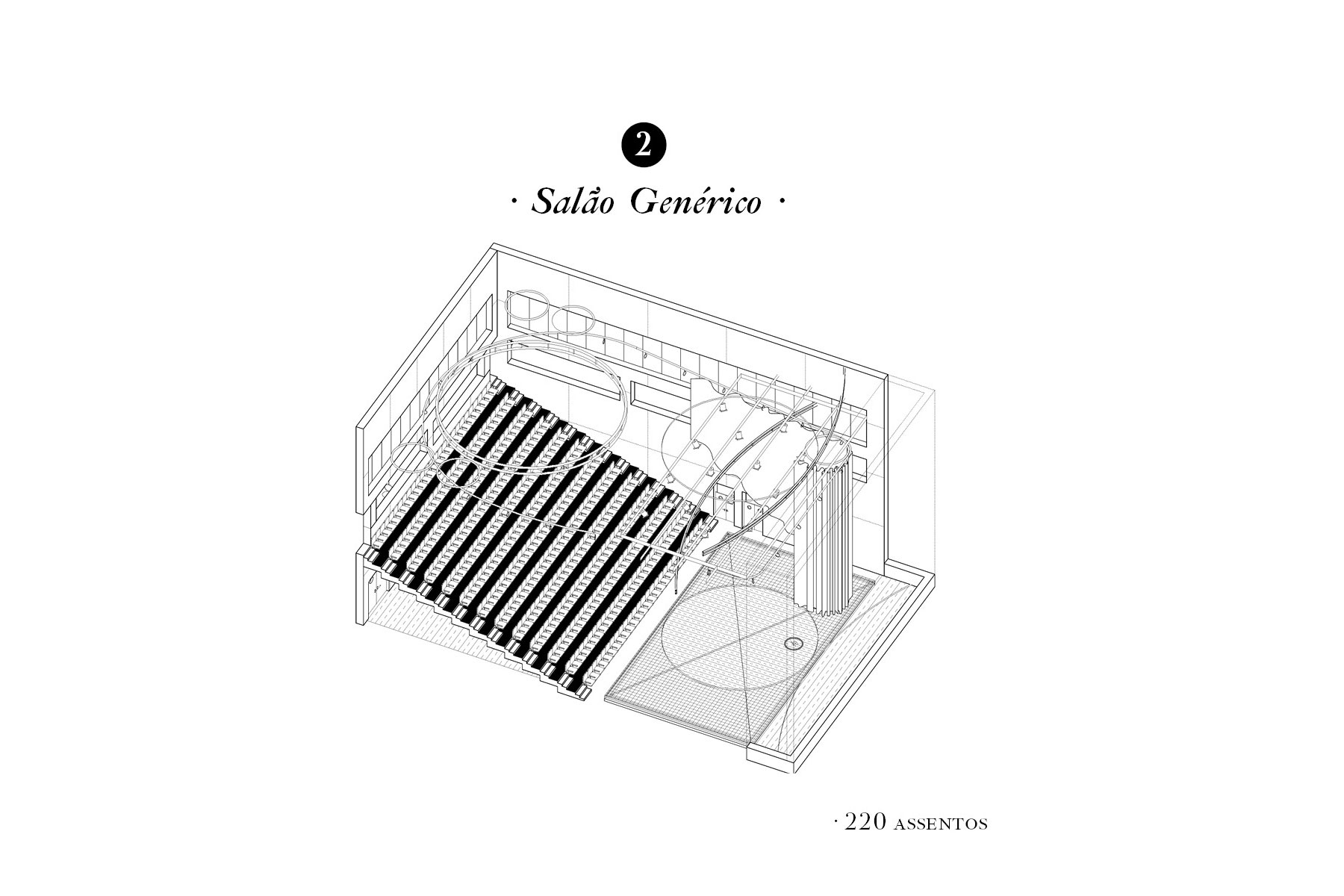 The Small Hall is a generic Box-Shaped space of 16×30 m that incorporates a flexible stage spaces and a collapsable seats system. Together with a suspended technical infrastructure it allows it to hold absolutely diverse configurations as well as very contemporary performances that require uncanny show layouts. Furthermore, one of its outer walls is a ‘Garage-Style’ huge door that opens up the interior space to the outer public esplanade for urban performances during the evenings of the warmer seasons.

Open  Schemes {The Inside Out} → 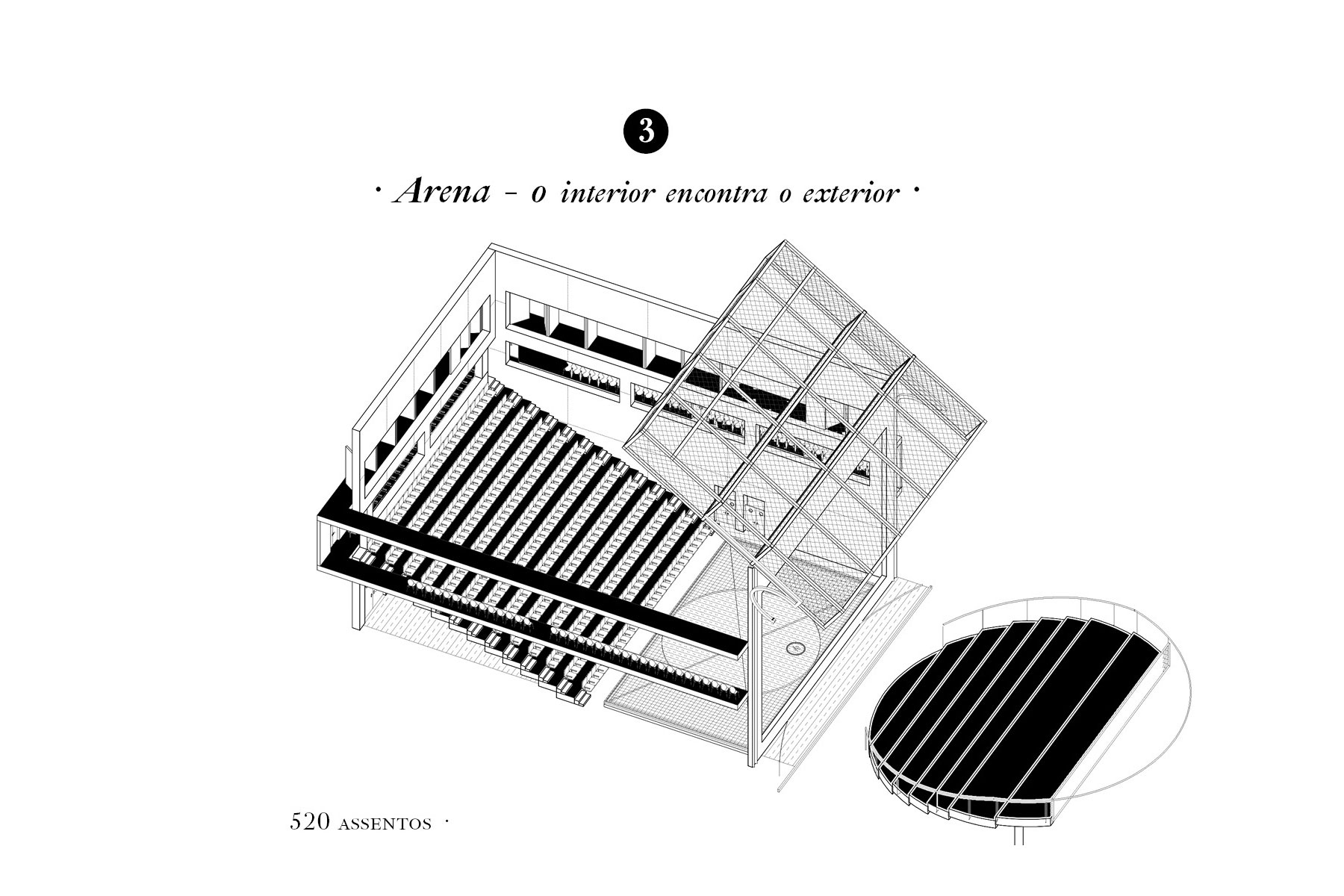 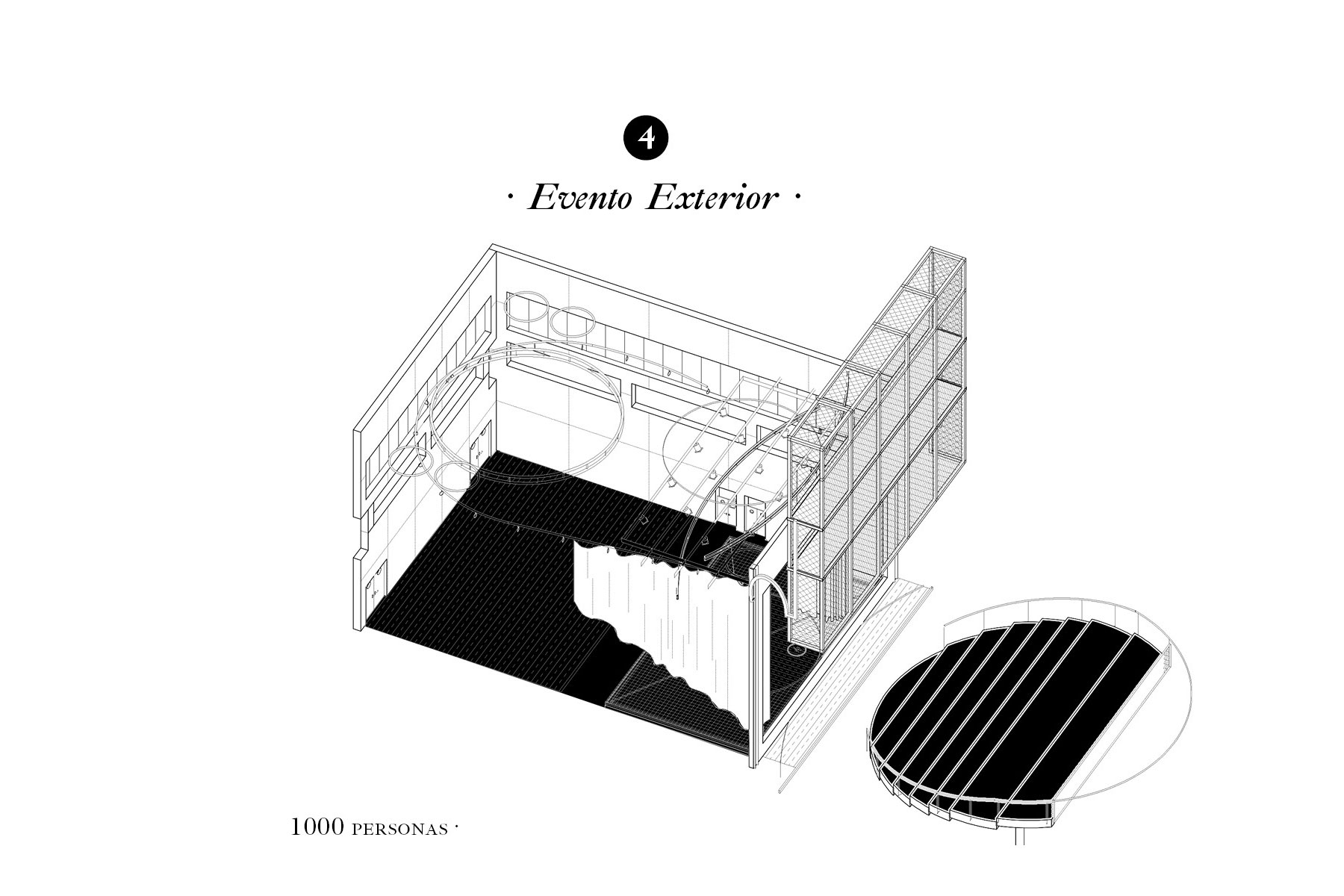 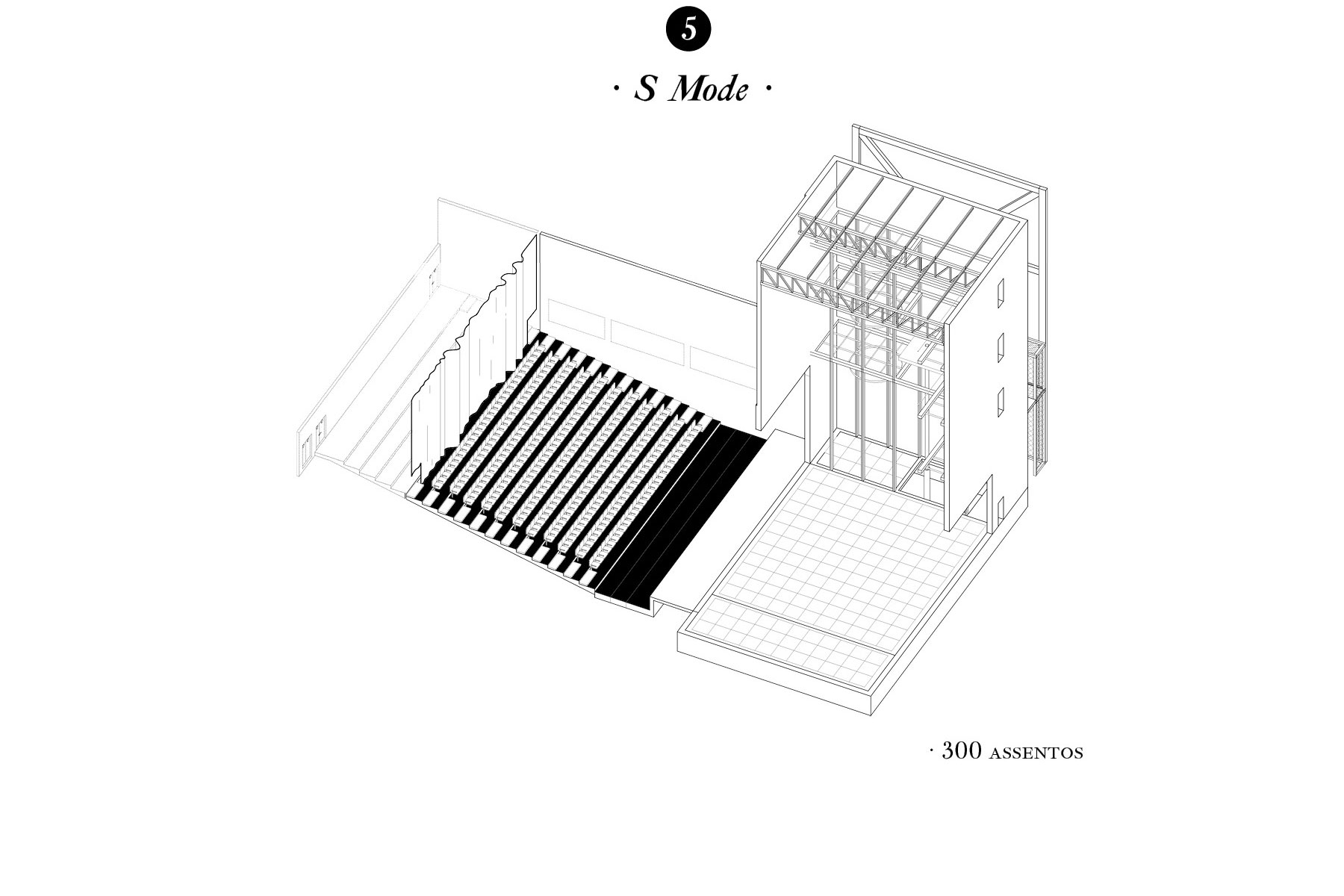 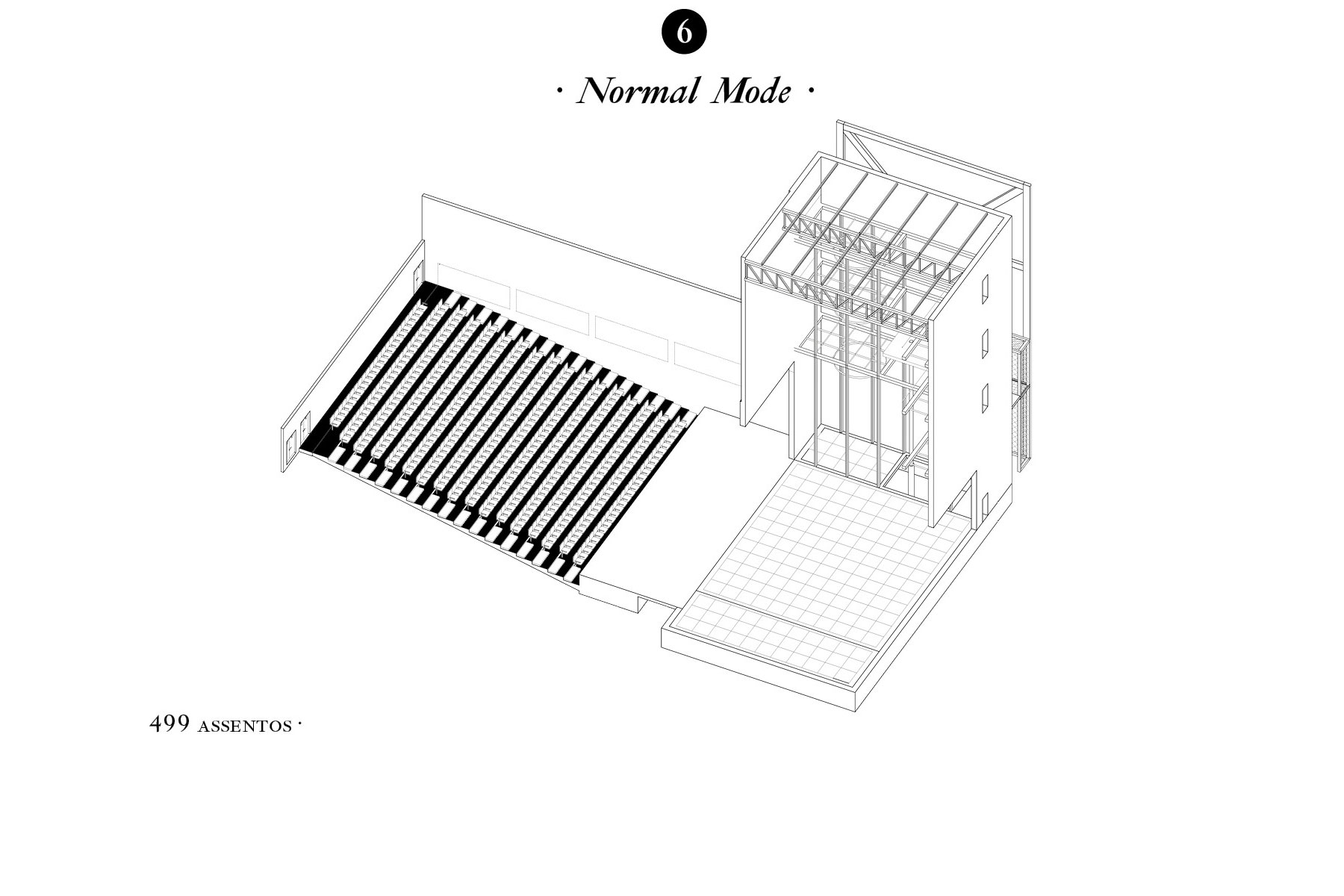 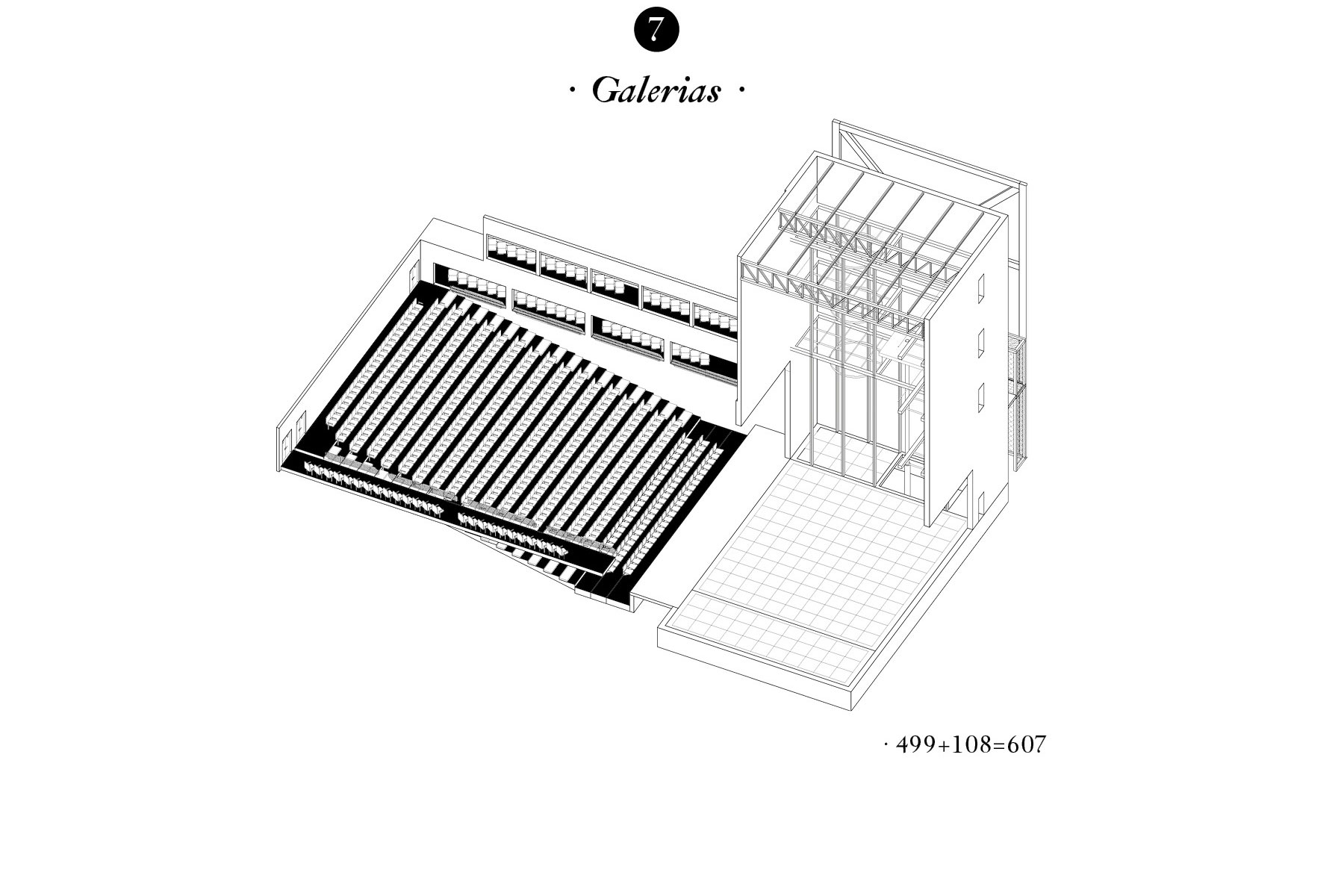 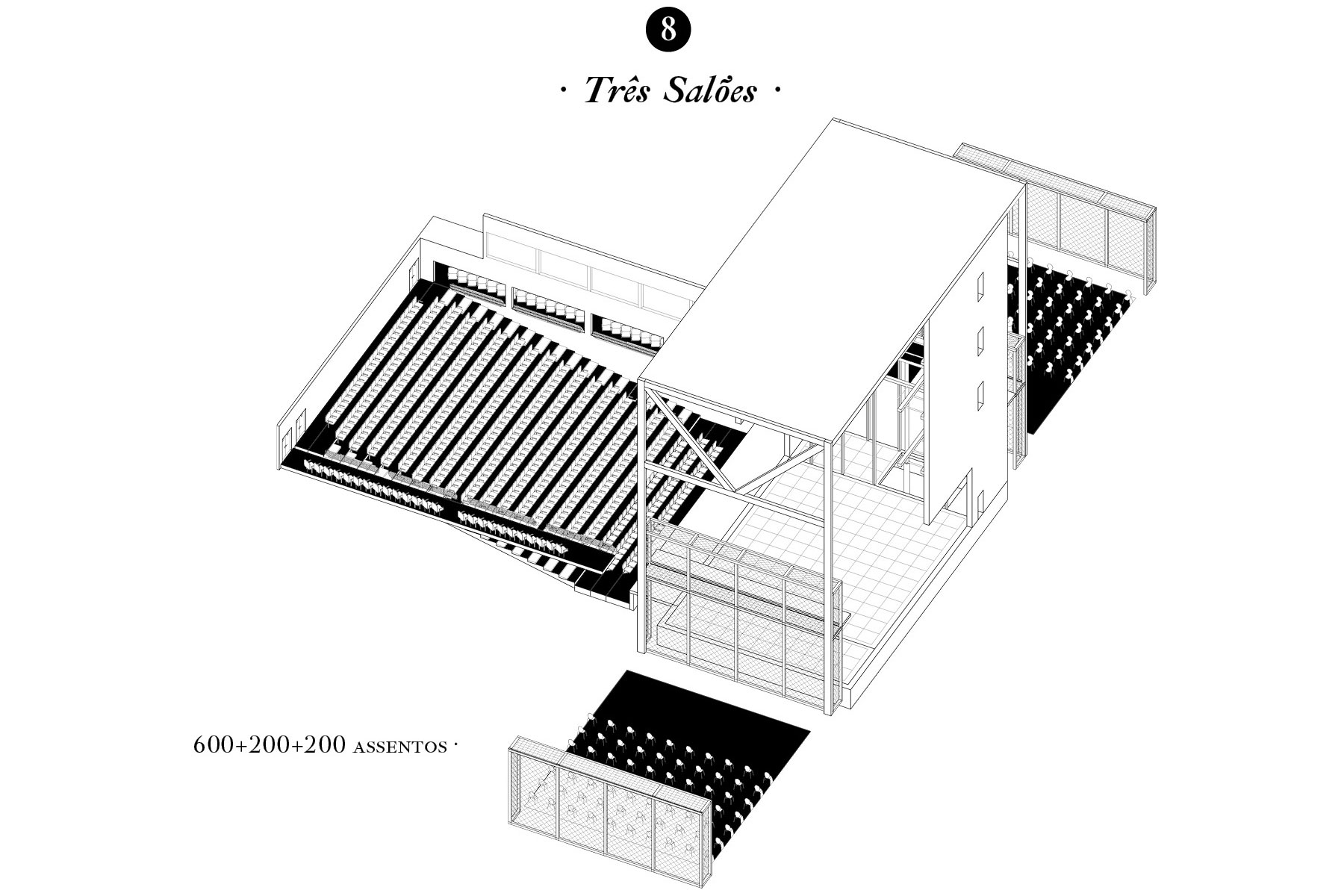 Being the Functional, Structural and Social core of the project, the Grand Hall can reach 499 seats.

The Stage, provided with a multiple platform hydraulic system, is the centre of the Grand Hall and can be flawed down or stepped for different configurations.

The main audience space flows in a continuous concrete slab that provides direct view to the stage. It is complemented by two side gallery levels that surround the whole space. Those side levels have independent and acoustically insulated communications that enable audiences to reach directly their seats from both the public foyer. 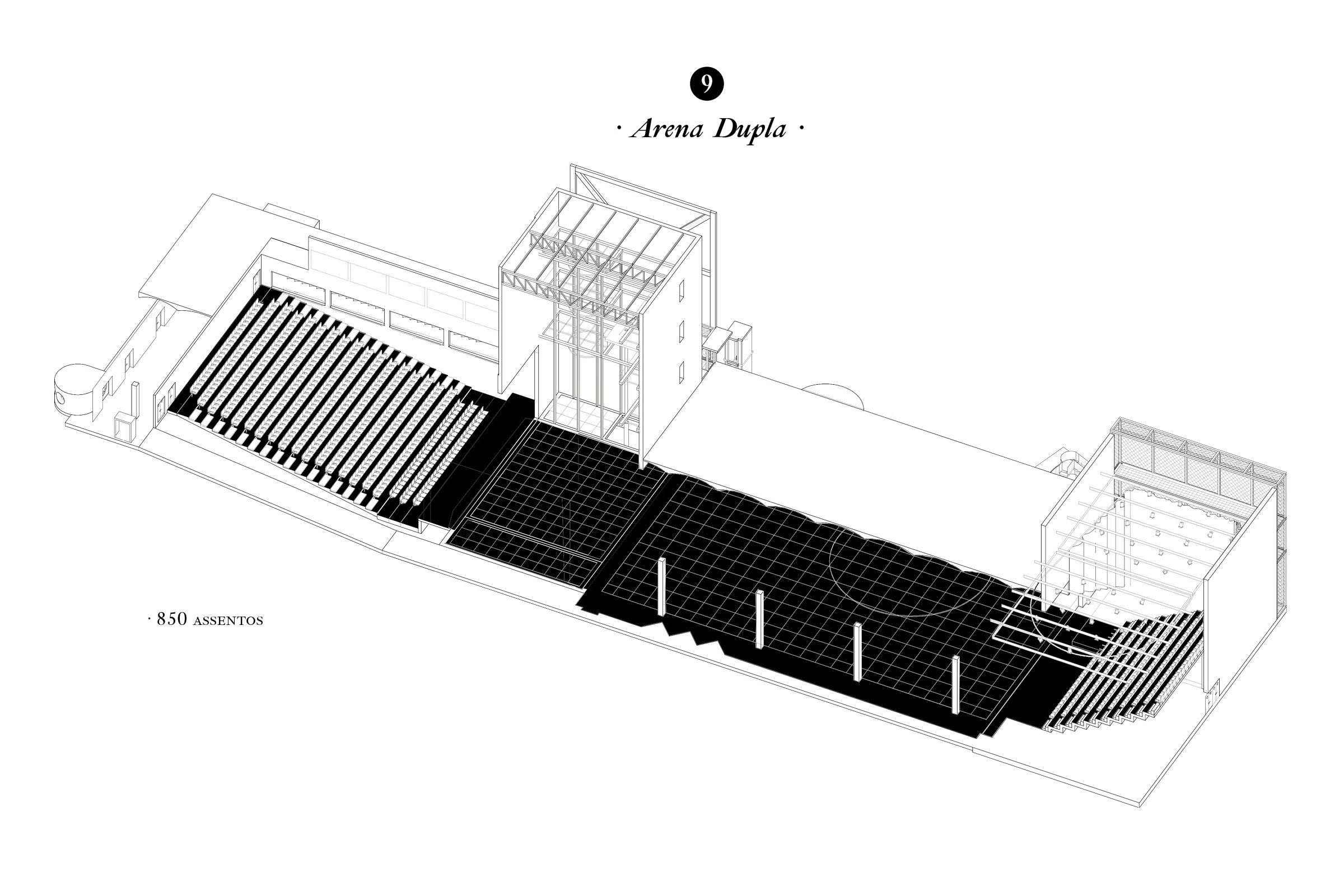 The rear walls of both rooms incorporate mechanisms that open their spaces to the building’s lobby, expanding the scenic space of both.

Using the central hall of the building as a scenic space that extends both rooms, the largest interior scene ever built to date for the performance of dance and musical performances is achieved.

A scenic space unprecedented to date… Using the expanded stage of the “Double Arena”, the public space is extended to a cruciform configuration in which the public completely surrounds the scene. The side walls from the stage box of the Grand Hall open its stage to the outside. The Grand Hall, the Black Box and the two external mobile stands are used simultaneously while observing a show in which reaches an audience capacity up to 2,200 spectators. 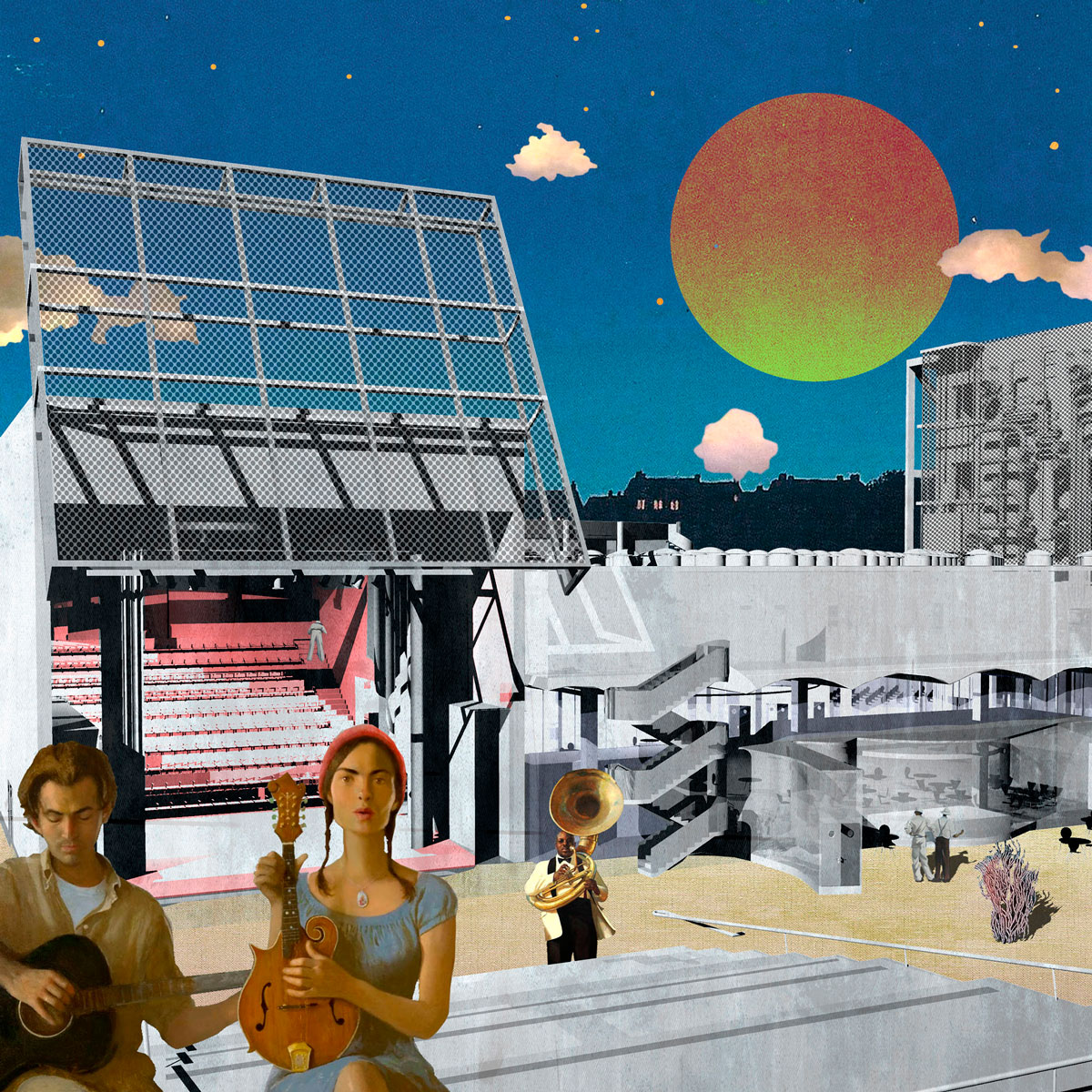