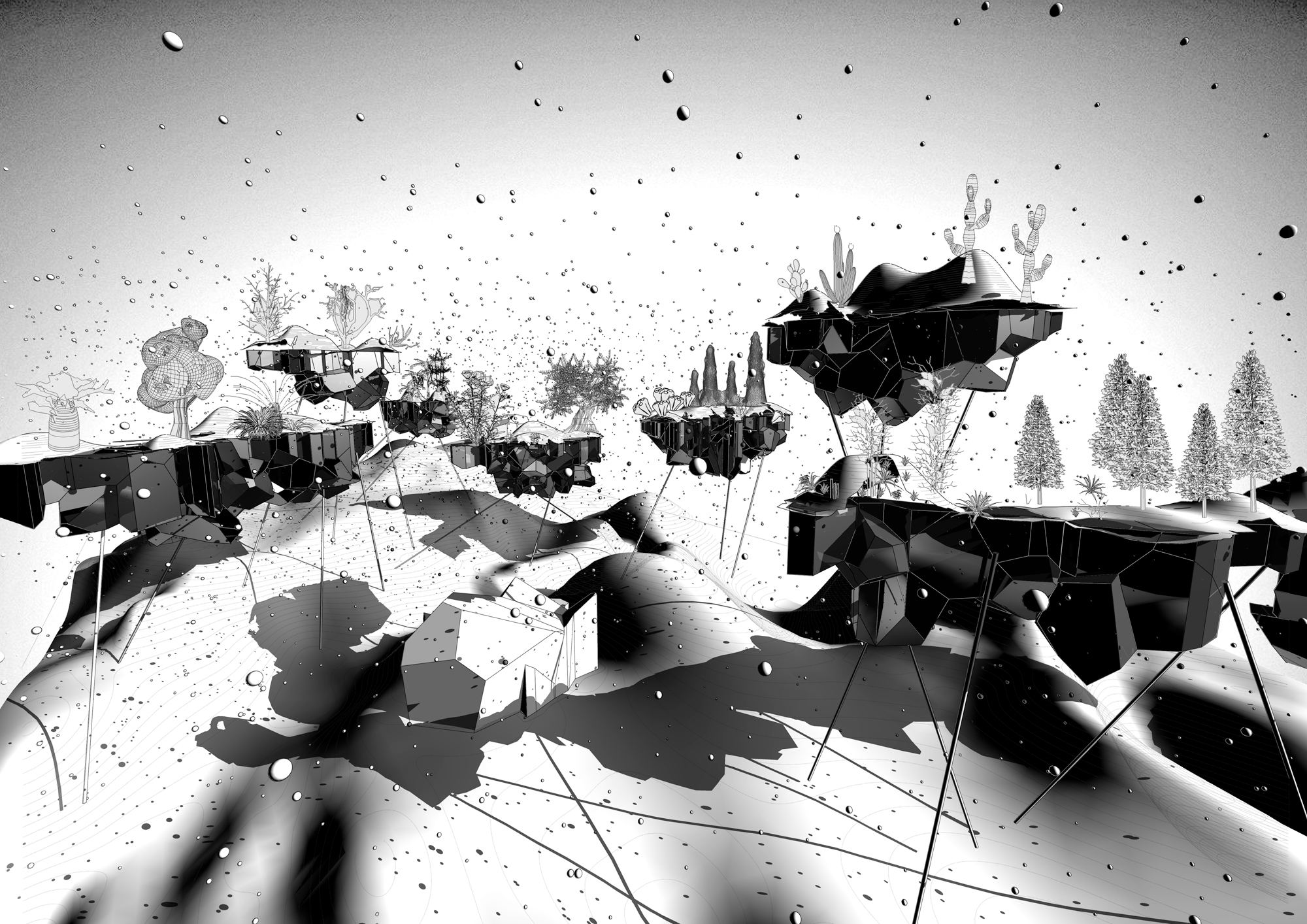 a project for Jardins de Métis

The Archipelago arises as a model for the proposed Garden. This Garden behaves as an Atlas of Islands, which would essentially keep its particular identities whatsoever. Limits and relationships are the main features of a fragmented garden. Within its frontiers, each island becomes a separate petite garden with unique shape and particular vegetation. Each island is a concrete identity itself. Hence they are linked, their characteristics intertwined, as they are displayed among the site according to a composition that proposed a relational space.

The plan is drawn as a map, in order to explain how each Island, each fragment of the garden, becomes a separate and almost independent reality. This independency allows generating seven different pieces, which would correspond to seven different Biomes: Tundra, Forest, Desert, Taiga, Jungle, Savannah and Oceanic. Therefore, the Archipelago stands as a representation of the world. Each Island does not just have the shape of a particular Biome, but also hosts its specific species. For instance the Desert island has the contour of the Mojave Desert and would contain its singular species.

Seven islands for seven Biomes. An Archipelago of Biomes. 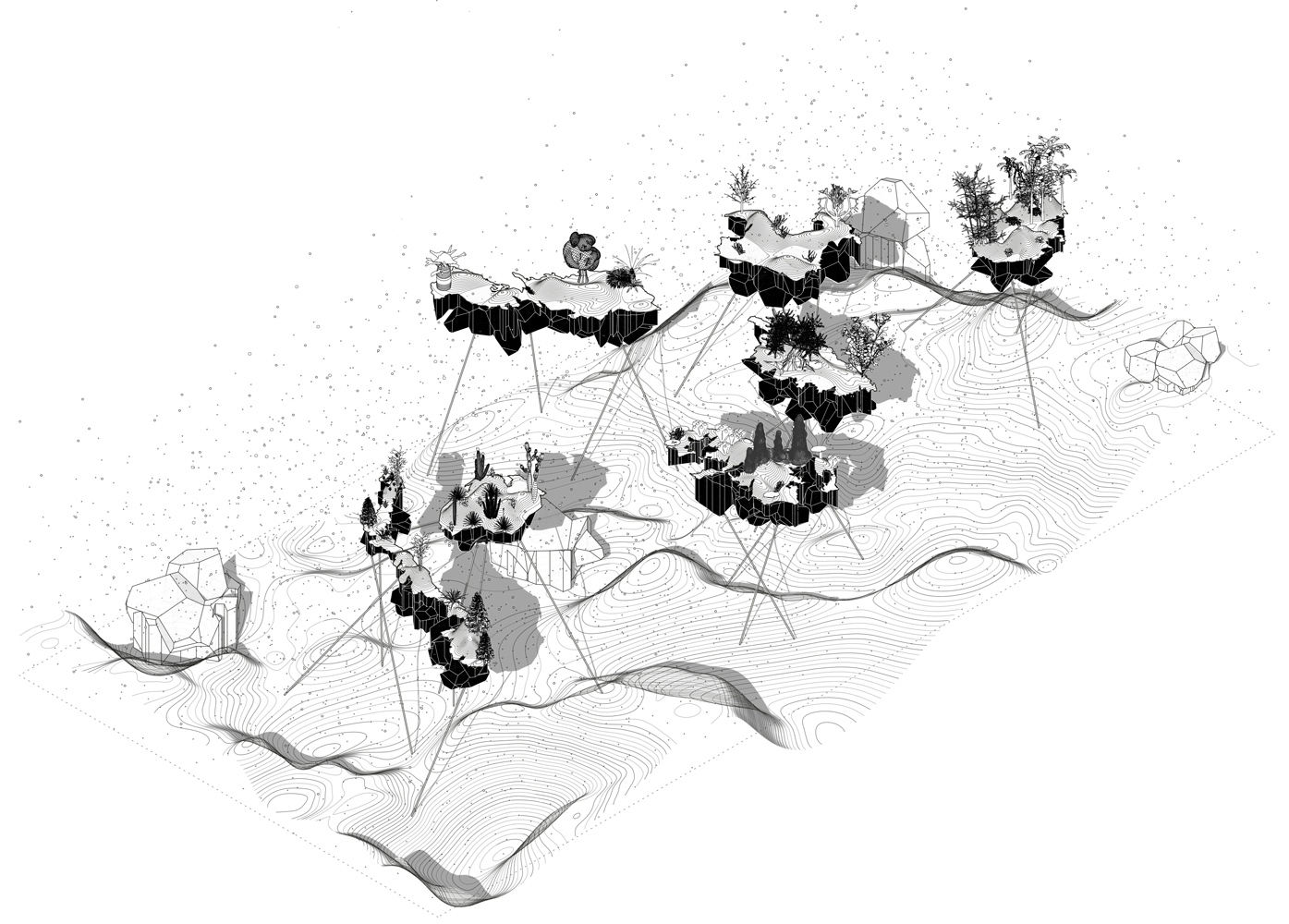 the Axonometric view of the garden ↑

Honor Mention from the Jury at Jardins de Métis Competition 2014 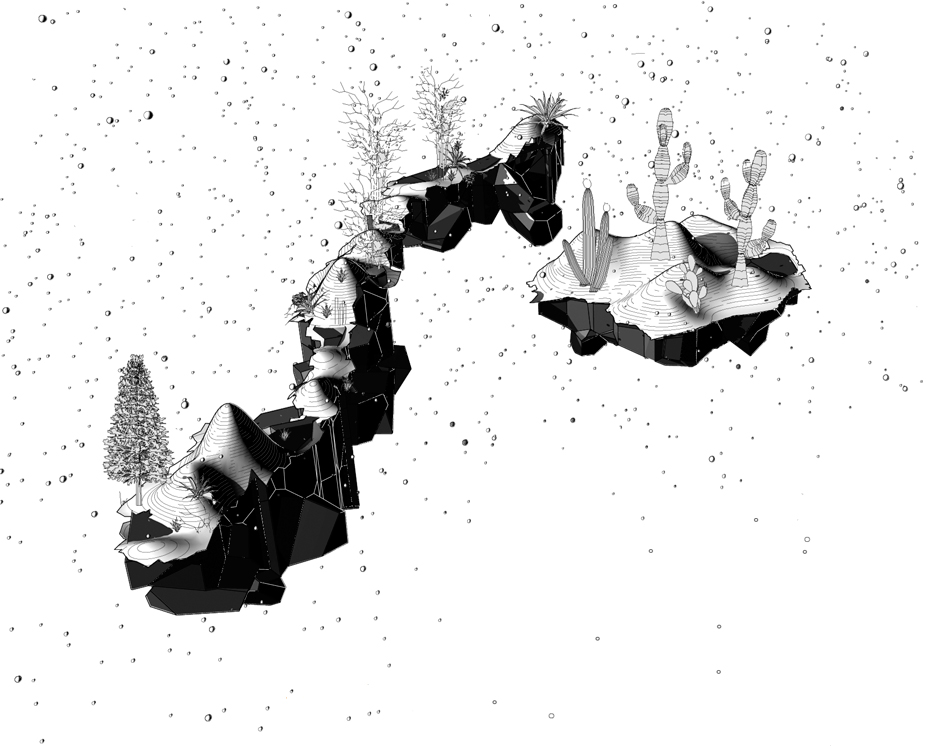 The garden is displayed over a generic surface of 10x20m. The site is covered with white gravel and, as in a Zen Garden, a topography is drawn on it. This topography is a representation of the relationships amid the Islands. The Islands of the Archipelago are elevated from the ground level up to 1,50 m, getting closer to human eye. They seem to be pulled up from the Earth and flying over a sea of vapour. A system of vaporizers is arranged between the Archipelago to generate a Water Cloud that symbolises the sea among the Islands float.

Each Island is made of five components. First of all, a steel structure of thin tubes painted white that holds the Island over the ground. Moreover, this structure serves as a guide for fixing the conducts of the vaporizing system. Supported over this structure, a black pot of polystyrene resin, which has a rock form. Its form is computer drawn with voronoi polygons in order to easily generate a developable precise drawing for its production. Therefore, a solution in folded steel sheet is also considered. This black pot is filled with soil and will host the vegetation.