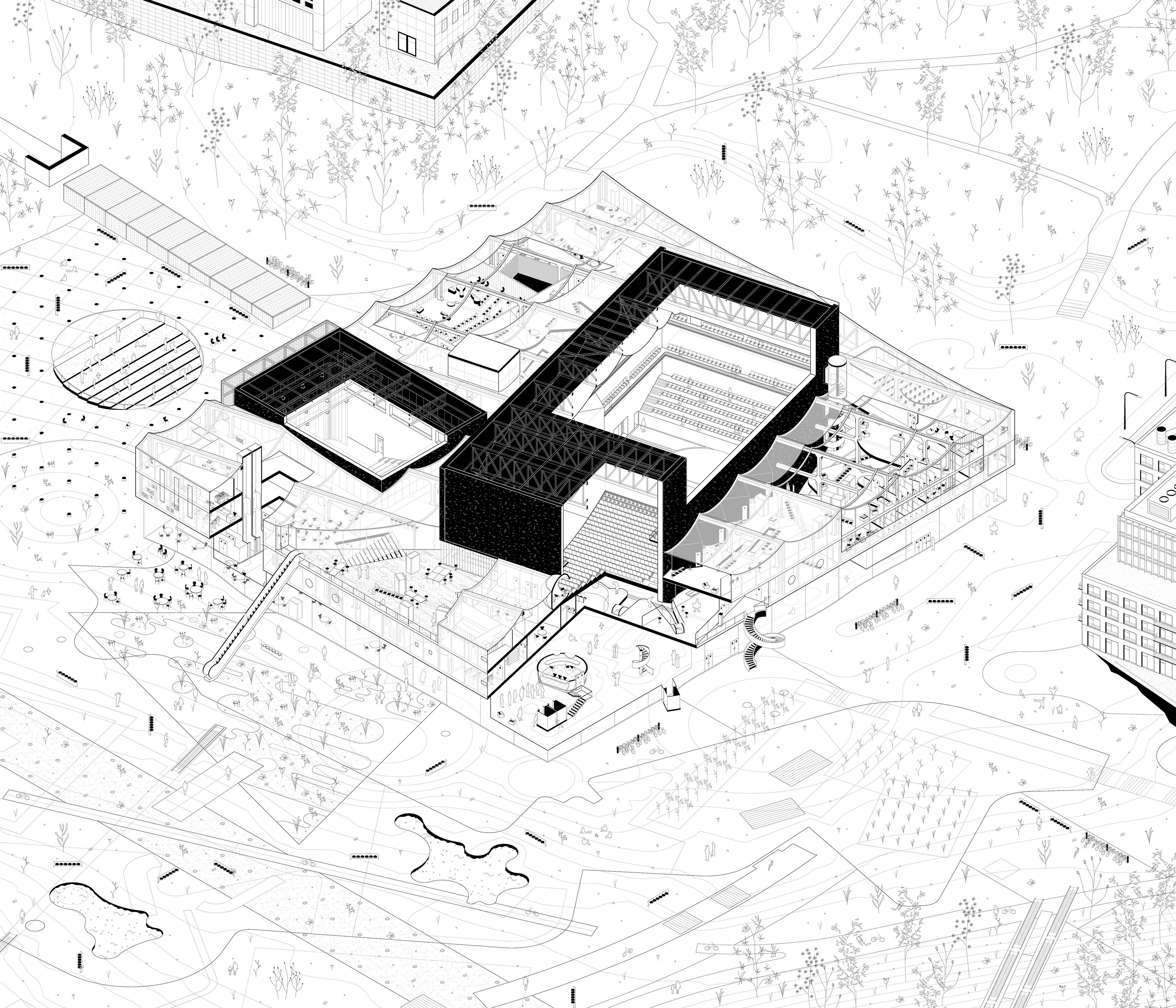 Tauras Hill and the House of the Nation

The New National Concert Hall is more a Urbanscape than a building. Its particular functions almost fly as in-gravitate programs over a reconverted and reconstructed public space.
Instead of topping Tauras Hill with a gem, with an alien object that would be positioned at its top, here we are doing precisely the opposite: We are recovering back and reconstructing the topography of the top of Tauras Hill claiming its public ethos as a Urbanscape. As a social context for Vilnius citizens. Generating a completely open ground floor which is more a urban space than a building. This ‘enclosed exterior’ would behave as a re-interpretation of the House of the Nation concept.
Such an update of the former concept of the House of the Nation aims to provide a public open reprogrammable vast space that can almost host any public function.
Instead of just proposing a container of the required functions. Instead of designing an isolated object that would host all the necessary programs for the National Concert Hall. Here, we are giving something more. We are using the physical materialization of those programs to organize an scheme that would free the ground floor, almost flying suspended over an artificial topographical level, providing citizens a space for gathering, dialogue, pop-up events, social interaction and cultural production.
Therefore, the required functions for the National Concert hall become the shelter, the volumetric roof for such public space.
The updated House of the Nation is nor a plaza nor a building but something in between. A place amid urbanism and architecture. A common framework for social gathering, cultural exchange and dialogue. The reconstruction of Tauras Hill-Top topography sheltered under the cover of the New National Concert Hall. 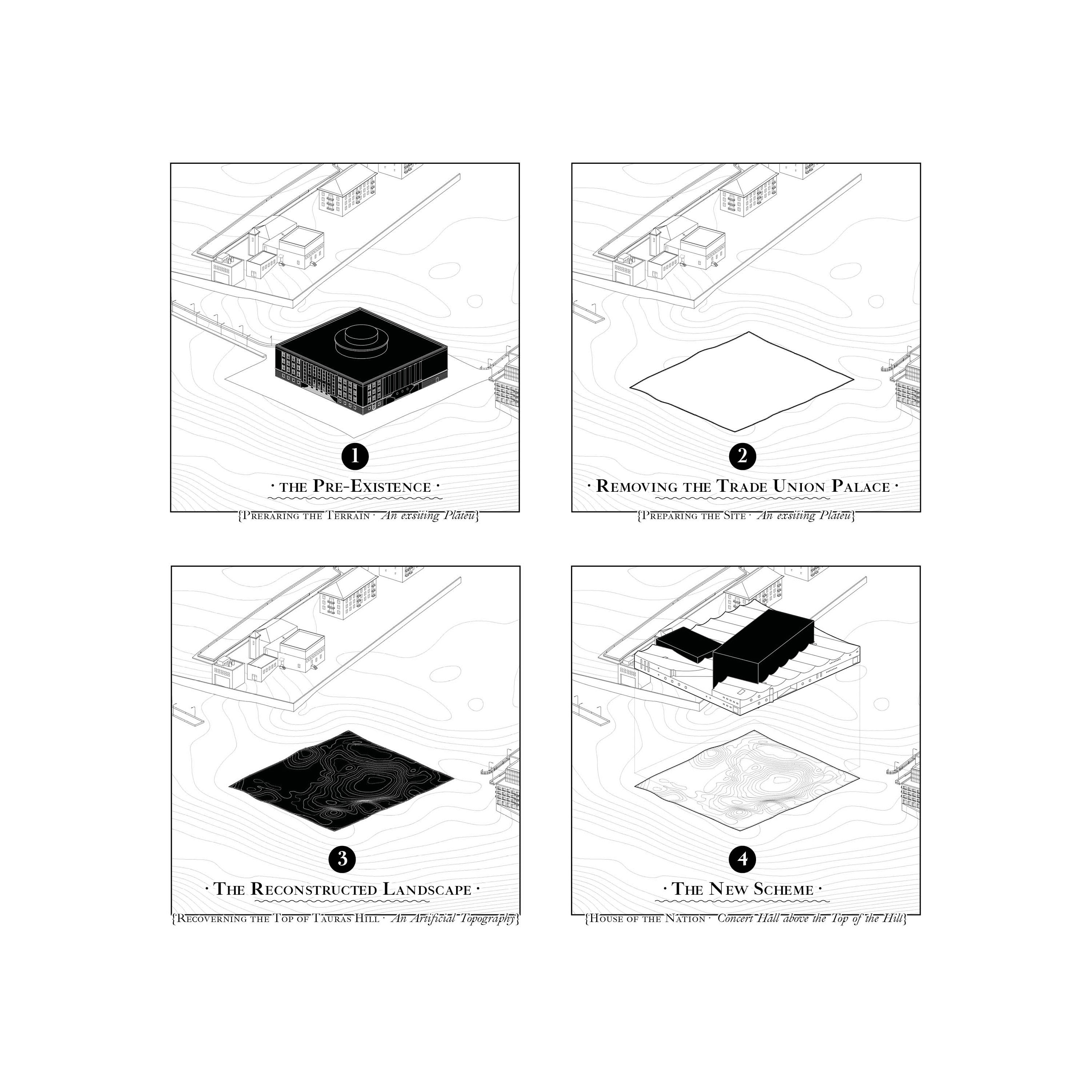 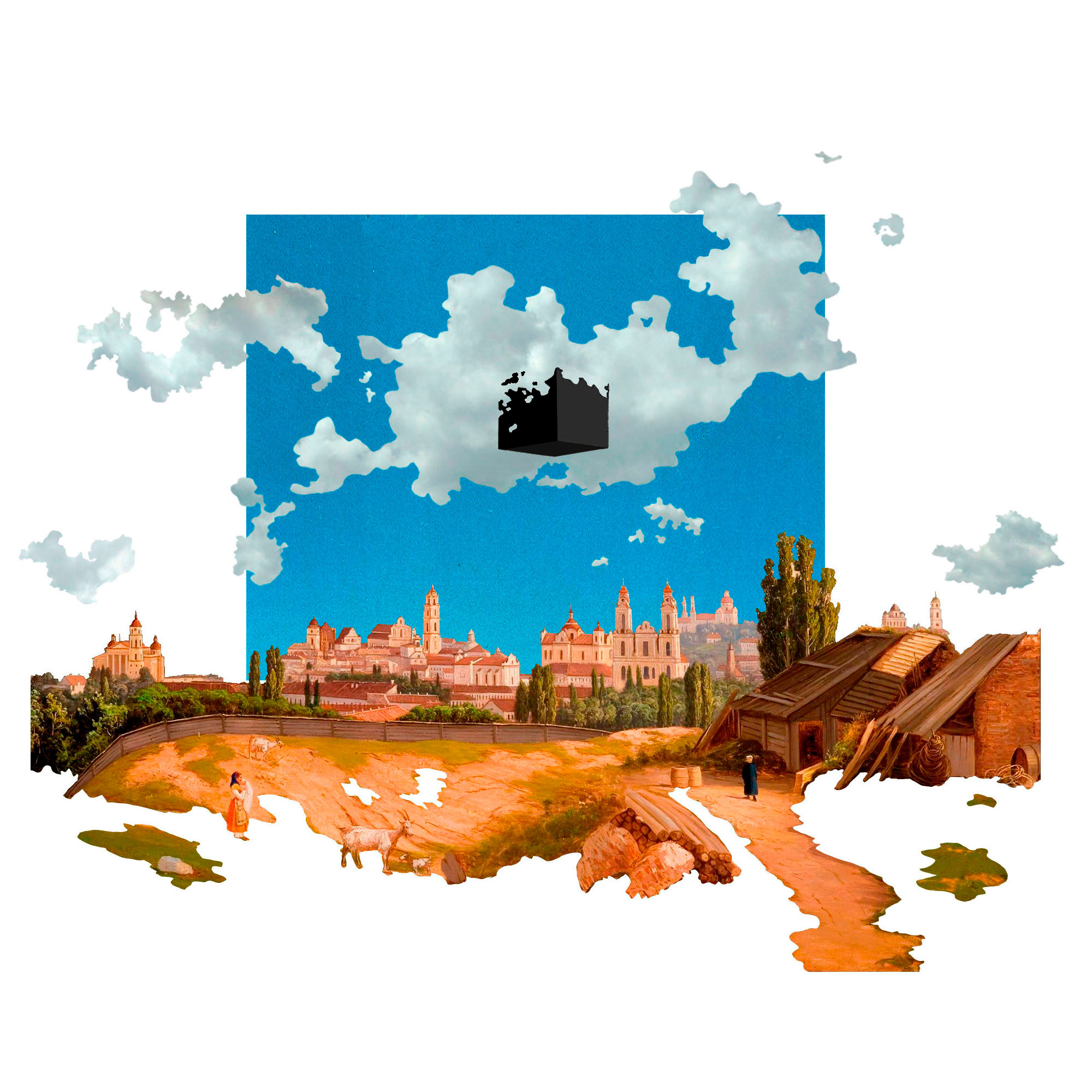 Collage 2: Two Rocks over the Hill  → 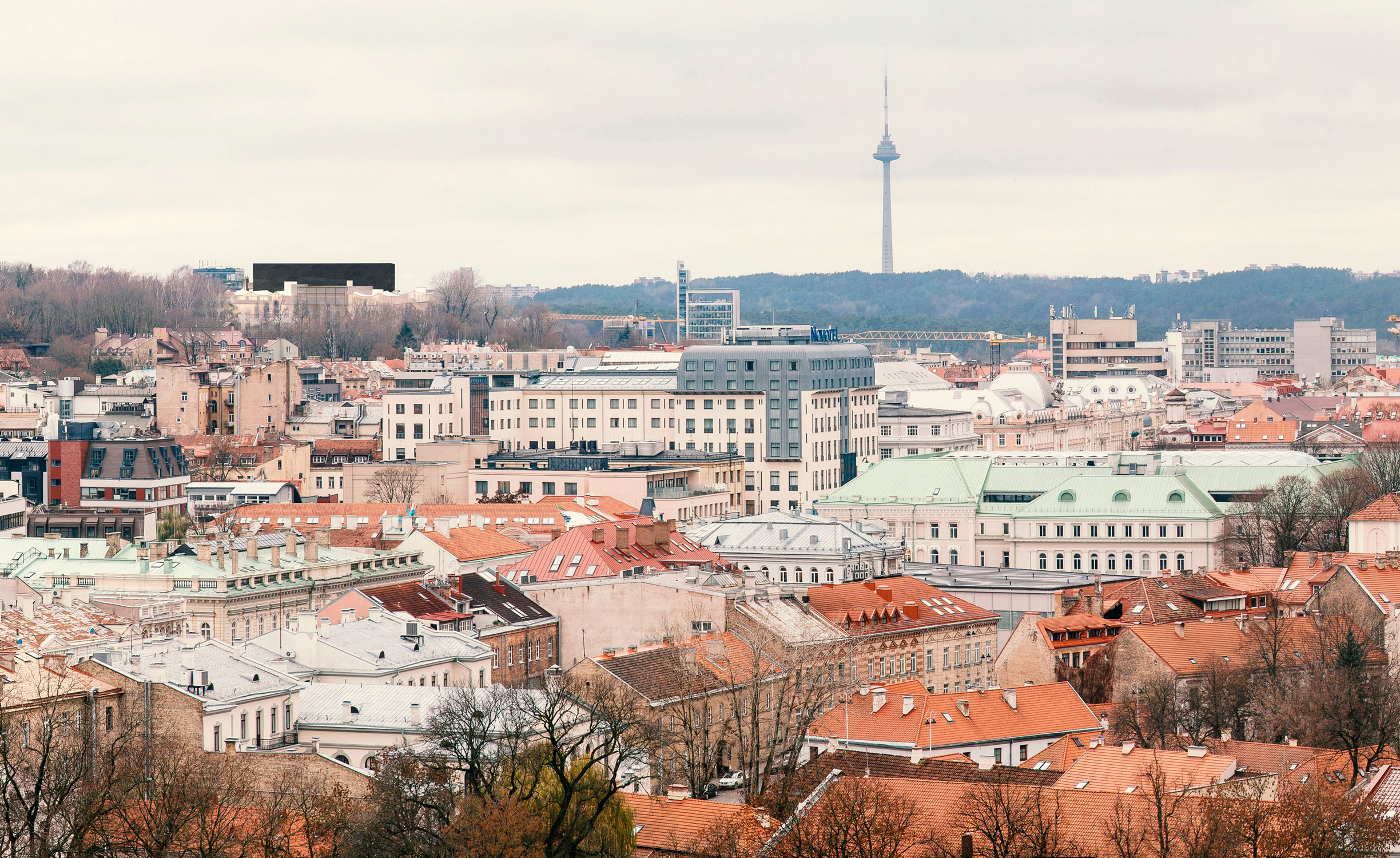 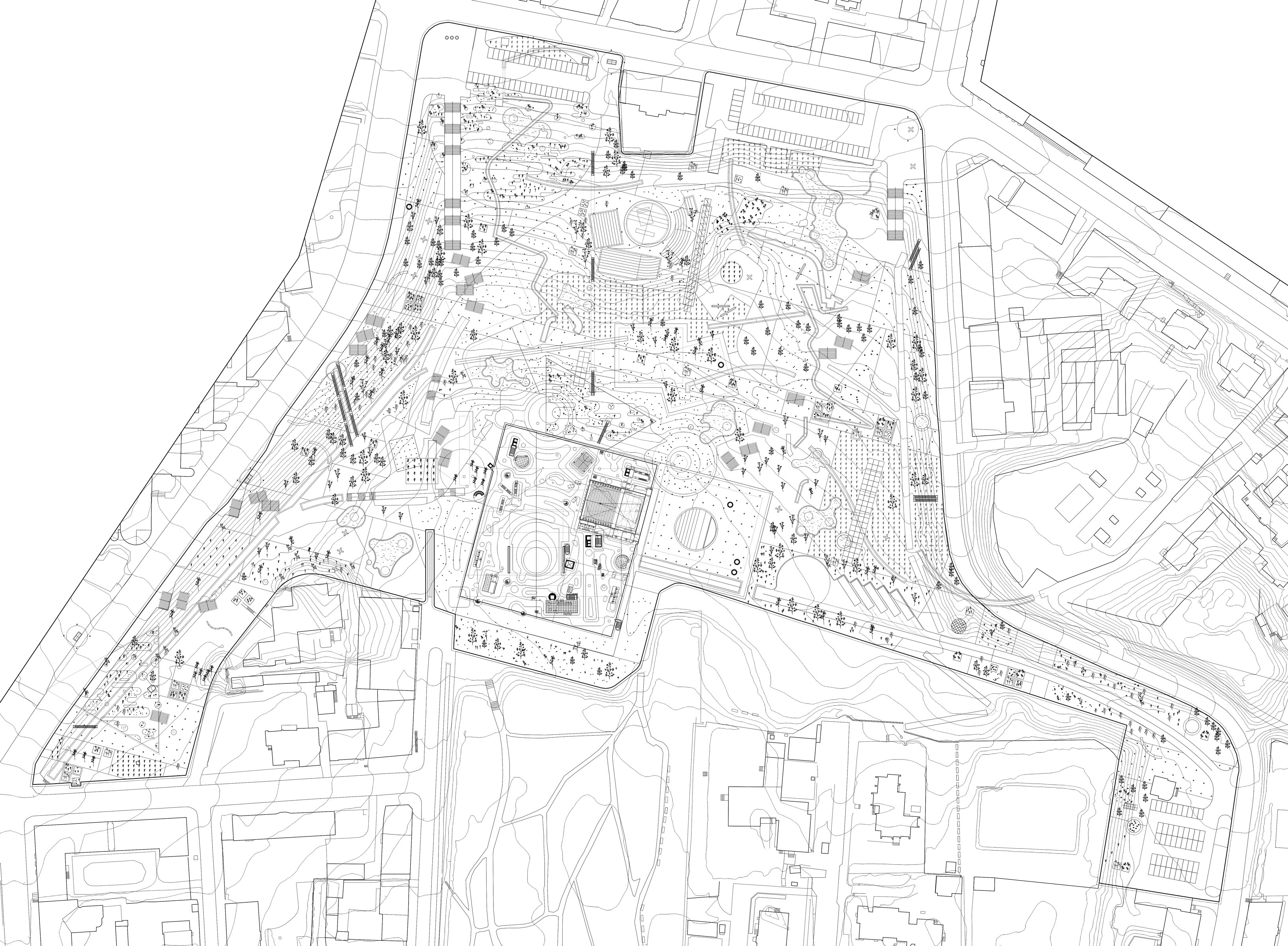 The project aims to protect the slopes of Tauras Hill as a remarkable characteristic of Naujamiestis. Therefore the existing terrains is not just protected but the original topography is recovered and restored and would become an artificial topographical ground floor for the building. The exterior of Tauras Hill Park mergers into the interior of the building in a gentle manner. That creates a continuous flow of publicness between the interior and exterior of the building, which is reinforced by the potential for opening all the north front of the ground floor facade, allowing the building to lively open up to the Park.
The proposal respect the current planing of Tauras Hill park and its general scheme, improving its layout with a series of patterns that just distribute different species of greenery, plants, vegetations trees or functional spaces that, integrated within the landscape proposal, they complement the cultural programs of the Concert Hall. Pedestrian pathways, stairs and escalators are displayed along the landscape layout optimizing the accessibility to both the Concert Hall building and the Park. Bicycle paths cross the whole park as well. A few series of cultural factions are also scattered in between the design, concluding an open multifuncional space for events in the centre of the park, children playground areas, sport facilities and urban gardens.
The layout radically respect the original protected terrain, as most functions are just using different floor finishings, vegetations or pavements to define their spaces’ limits. Only a very few constructed structures and artifacts are proposed.
Taras Hill Park landscape layout formalizes as a sequence of programmatic stripes that are intersected by pathways, stairs, ponds, urban gardens or auxiliary functions. 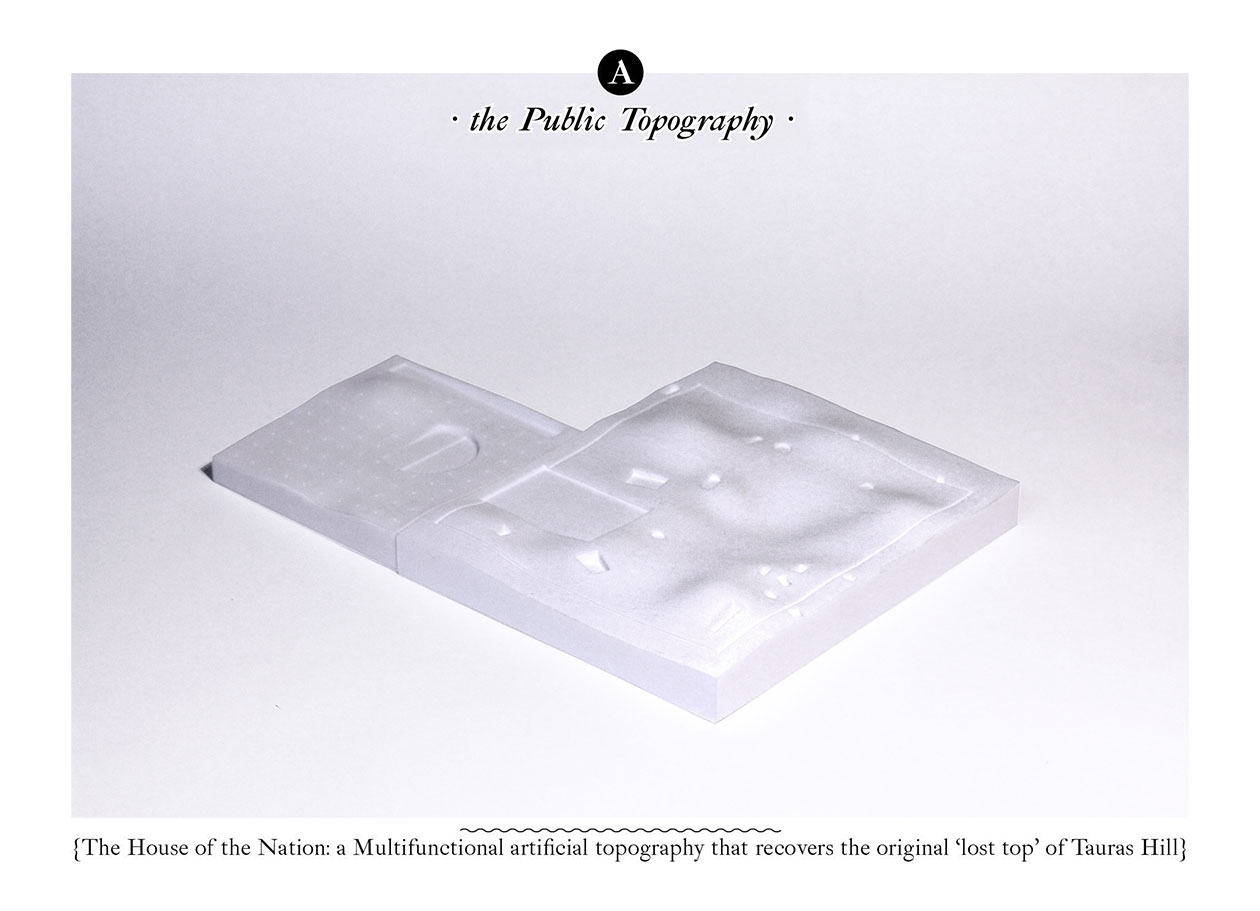 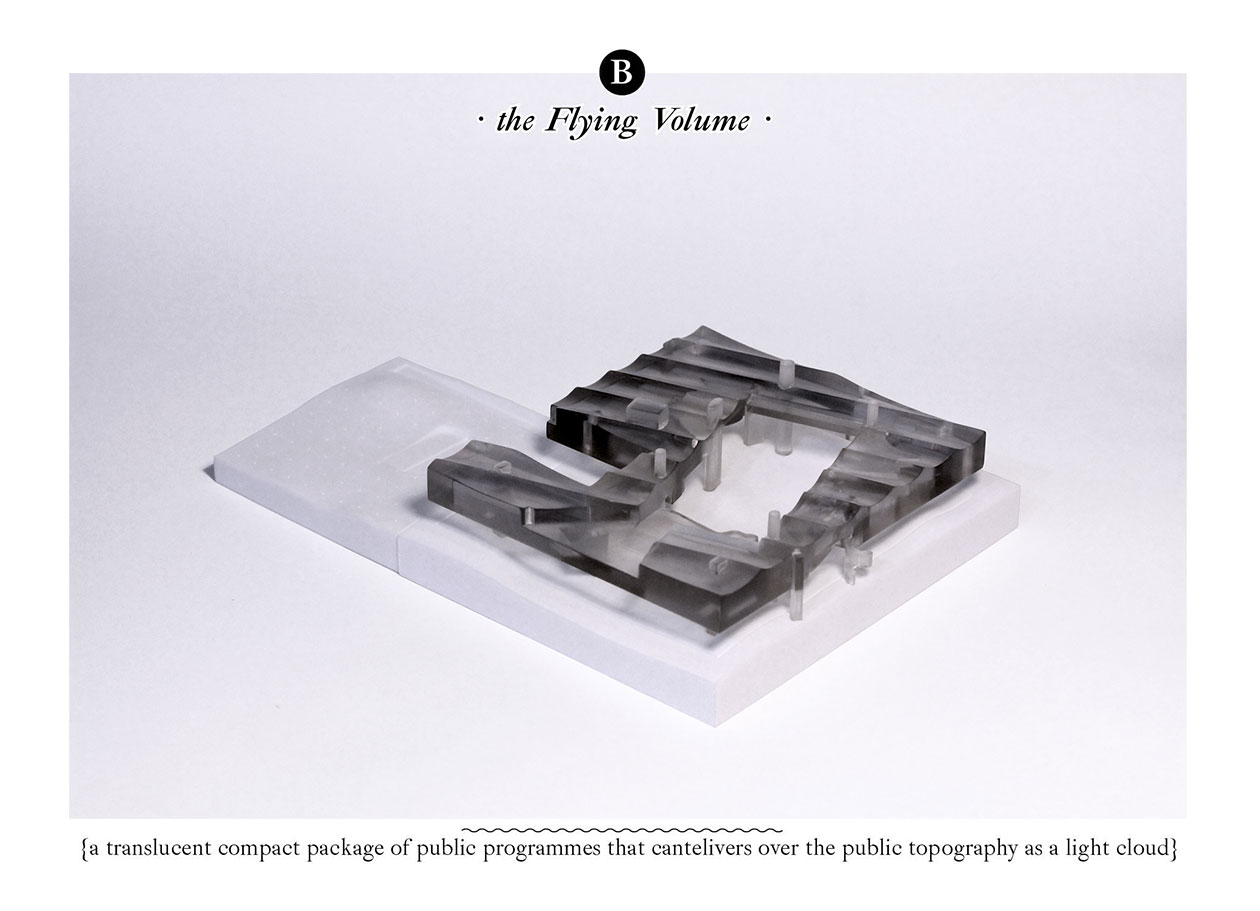 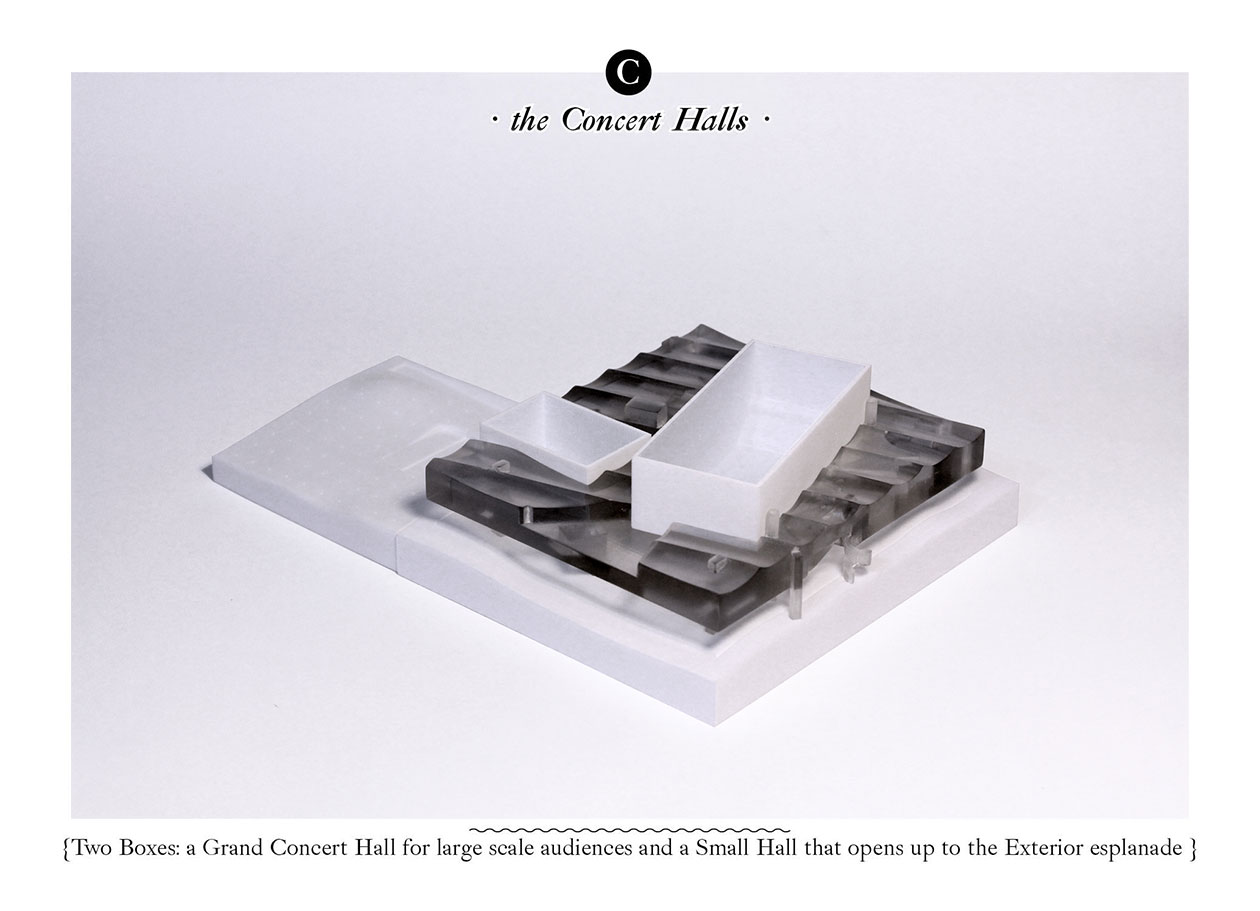 The projects stands as an elevated and suspended volume of specific functions that is hold up by two Concert Hall Box-Shape volumes, which liberates a lower generic ground floor level for a very open public use, exploring and challenging the social possibilities of such a building.
Whereas the above ‘flying’ shelters all the more compact programs as well as those only accesible to the audiences of the Halls; the lower level is a highly socially permeable space where only very few spaces are permanently enclosed and where very juxtaposed programs and functions can perform together constantly. 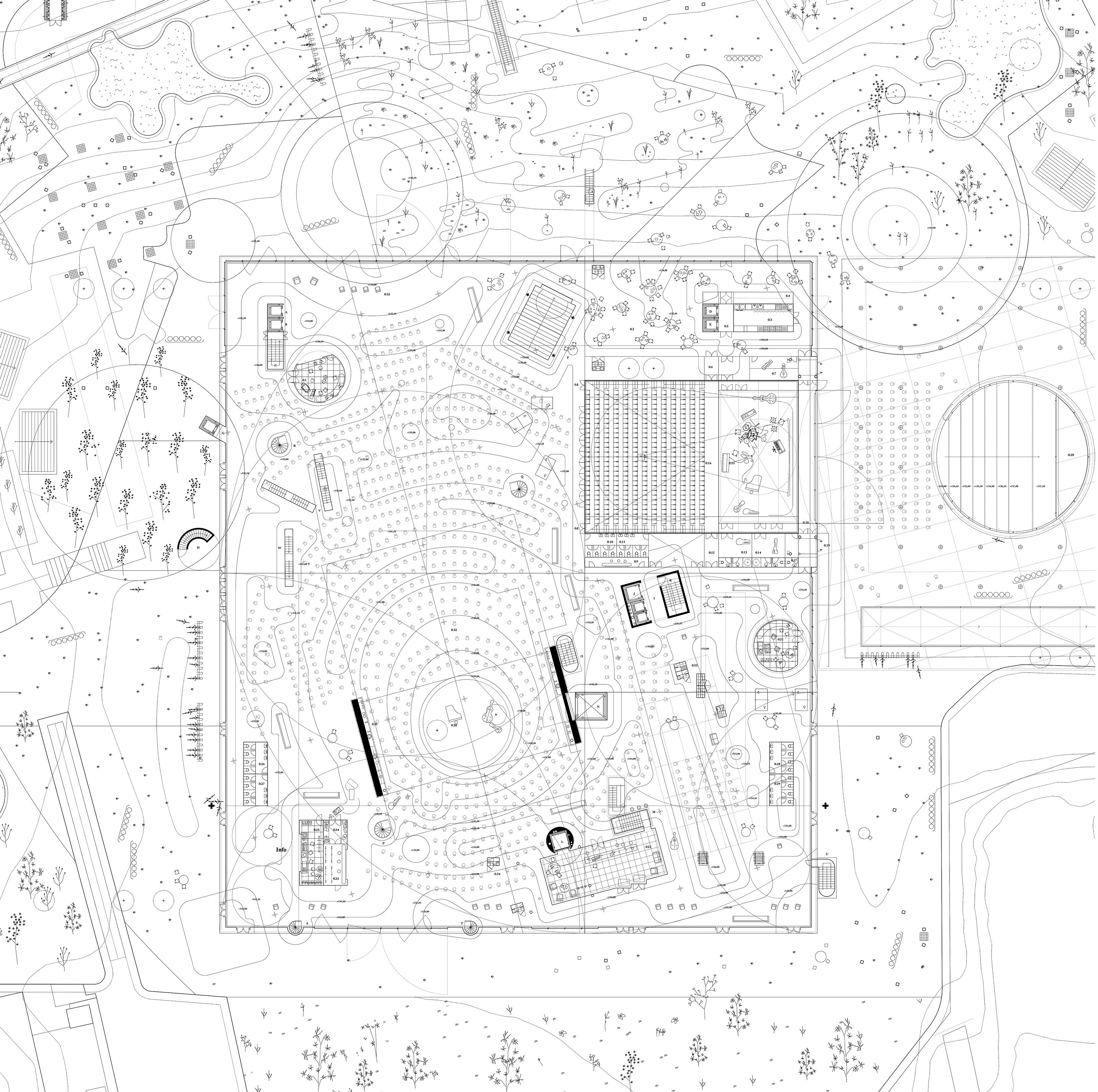 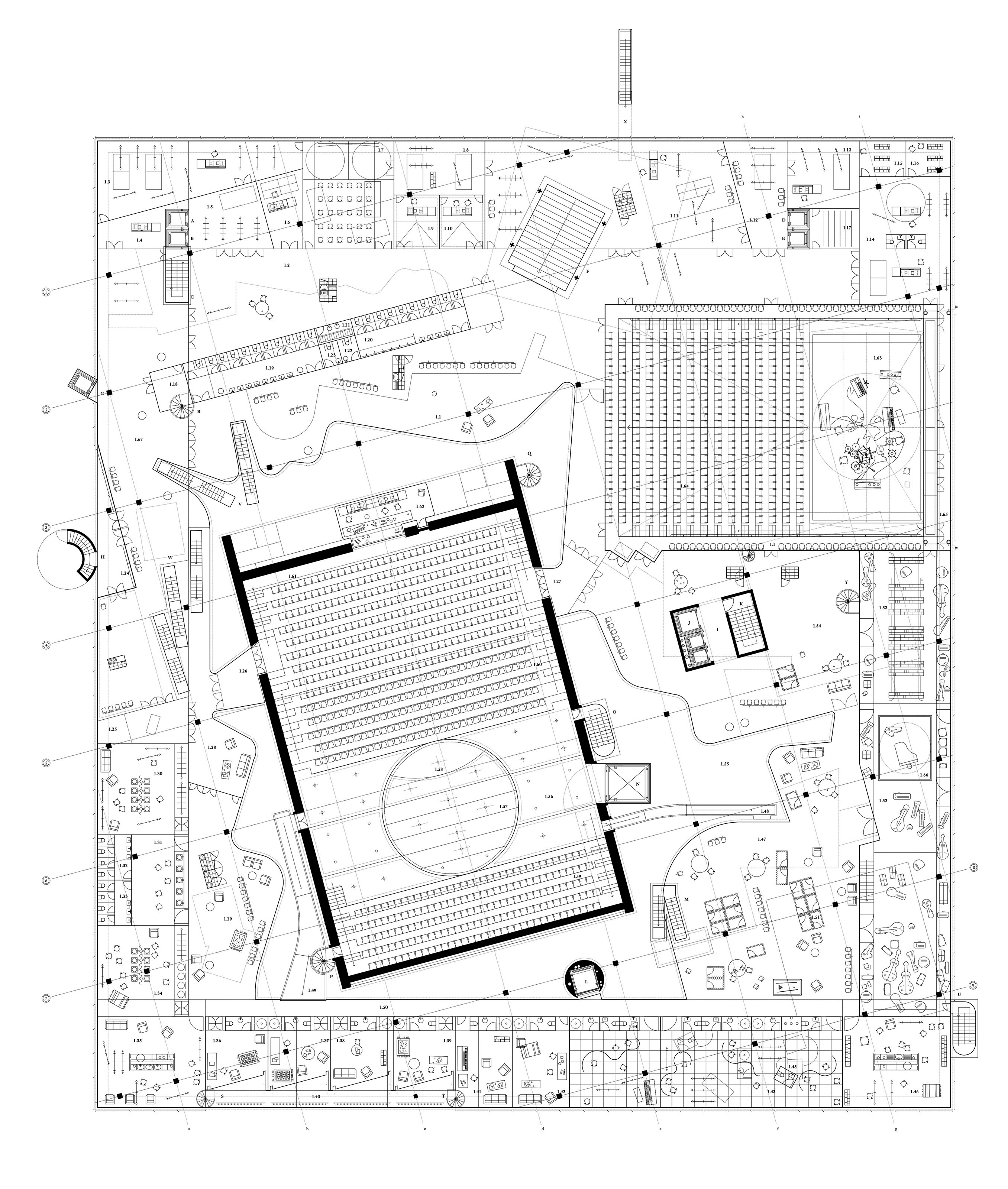 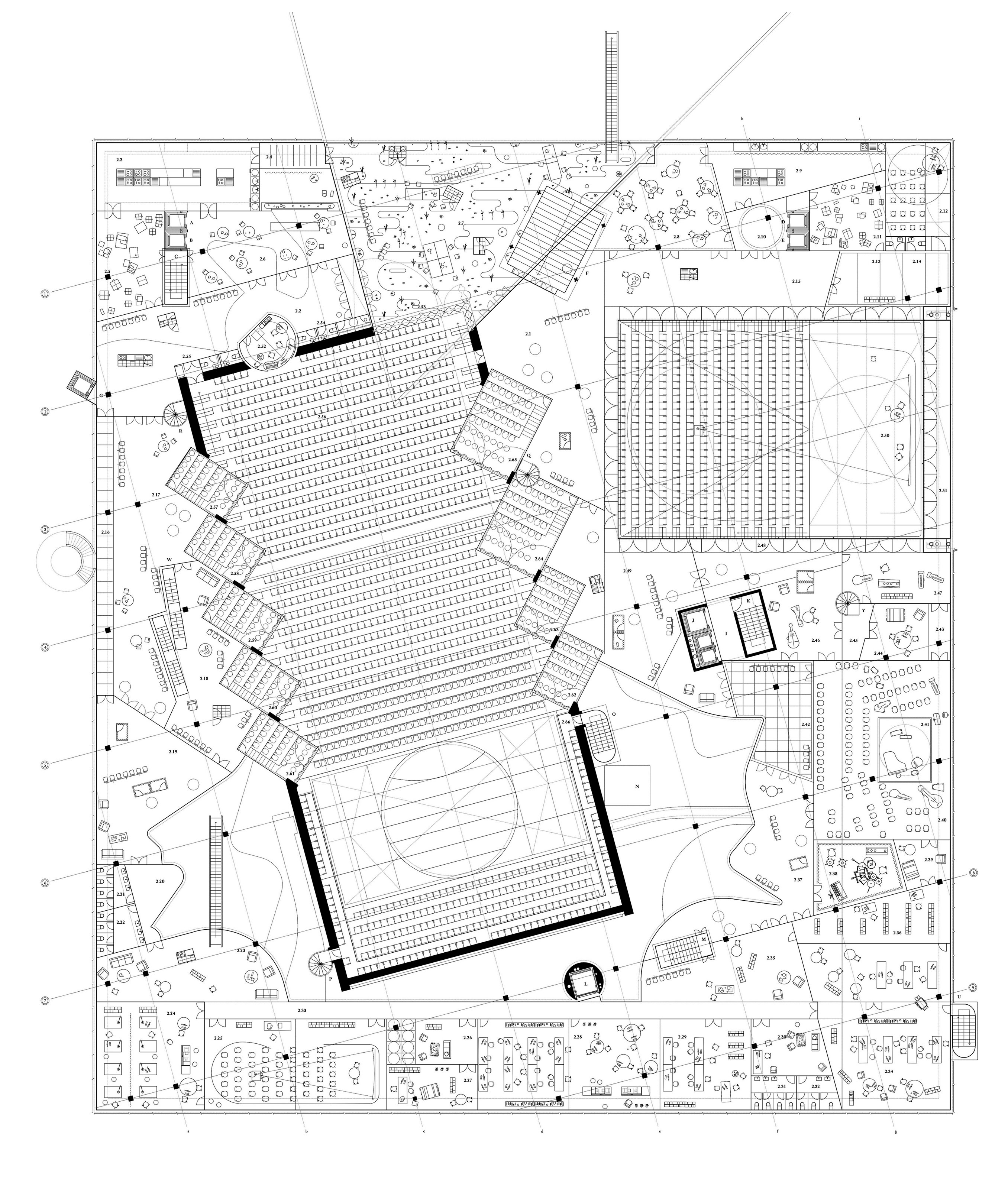 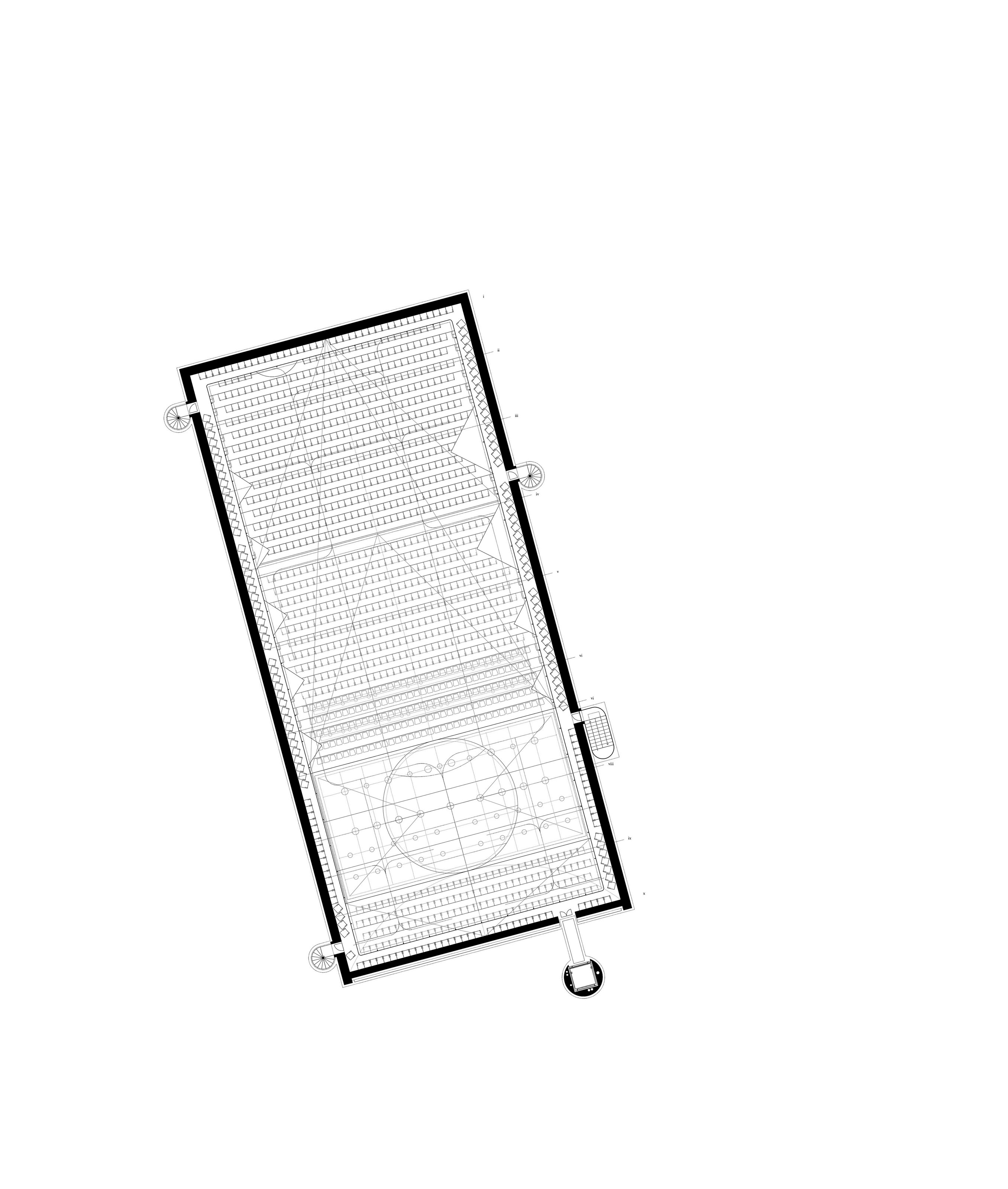 The Layout of the Konzerthaus

Due to its public ethos and its topographic relation with Tauras hill, the north side facade of the Ground floor is defined by a series of sliding glass panels that can also rotate at certain points. That allows the north front of the building to be opened for very public events and to merge its interior topographical space with that of Tauras Hill Park. The exterior landscape flows into the inheritor of the building generating a natural transit between exterior and interior, between publicness and privateness and between the urban and the domestic.

On the East side of the building, and facing the Small Hall, a big travertine marble esplanade defines a huge exterior space for summer and open events. The capacity of the small hall to be opened to the esplanade and to activate its performative ethos becomes a crucial feature of the buildings. As it can open its interior Stage infrastructure to the urban space and celebrate concert, shows and performances for massive crowd audiences that would gather on this exterior esplanade.
The esplanade also serves as a gathering and landing point for the visitors that would arrive by coaches, taxis or Ubers to the nearby drop-off express parking spaces.

On the North East corner of the building, delimited partially by the main stairs and the volume of the Small Hall, stands the main restaurant&cafe for the New Concert Hall building. It has a small kitchen that is vertically connected to the main kitchen two floor upstairs by a staff double elevator core. The restaurant can spread its tables and chairs over the exterior landscape for spring time a terrace.

The Concert Hall official Ticket office is located on the north side of the bulling and it works together with the Cloak Room and wardrobe that are located on the south side. They are deliberately located in opposite corners of the same facade to distribute queues and avoid confusion of users.

On both West and East sides of the buildings two bathroom boxes are located following the vertical wet cores for water distribution and evacuation. They have the sufficient capacity to respond to larger event requirements.

Separate independent Staff Entrances have been designed facing the south facade and directly connected with lower basement level. They provide immediate access to the upper staff and performers areas.

The plan is populated with a series of diverse vertical cores for different programs and different users. They are deliberately materialized in a different way in order to achieve singularity so that they are easily recognizable and their shape/form can assist to distribute circulation of programs among the building. Spiral stairs, escalators, double stairs, elevators and rising platforms achieve the vertical connection of the ground level with the polycarbonate translucent volume of the two levels above. 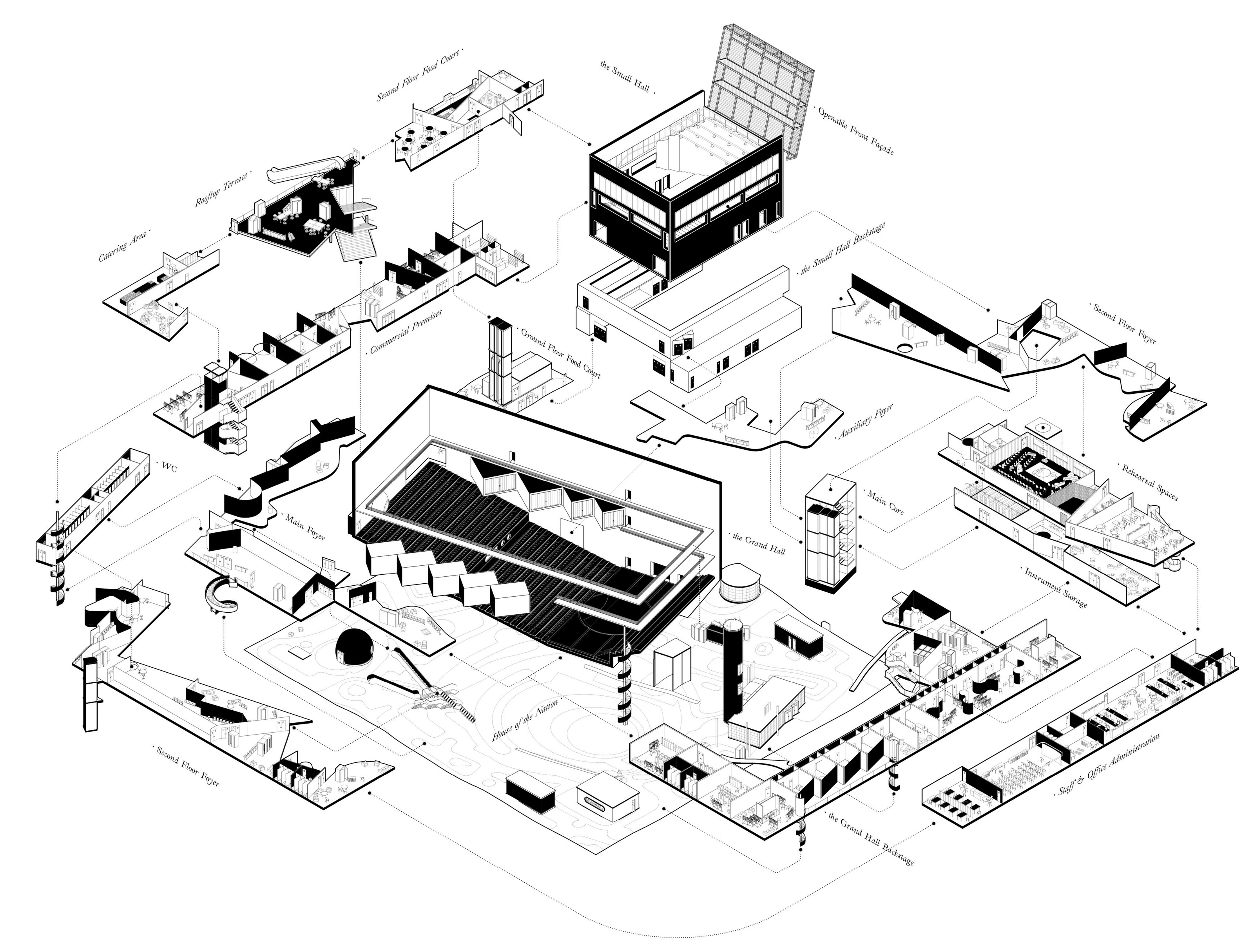 The Main Hall combines the architectural, acoustic and formal strategies of Four remarkable buildings. Postproduction becomes a design method that incorporates features from these four reference Concert Halls in order to define a singular and unexpected scheme that merges the best concepts from each building.

The Wiener Musikverein stands at the main influence for the Shoe Type Box section with perimetral Balconies. Moreover Rem Koolhaas/OMA’s Casa da Musica, as the contemporary revision of the Musikverein, serves as reference for the Audience’s Slab. From Konstantin Melnikov’s Rusakov Club we are extracting the Combinatory Potential of separate convergent balconies. And finally, from SANAA’s Kunstlinie Almere Concert Hall we are using its U-Shaped perimetral Galleries that expand the potential of the Shoe-Box type to a more enclosed and surrounding experience. 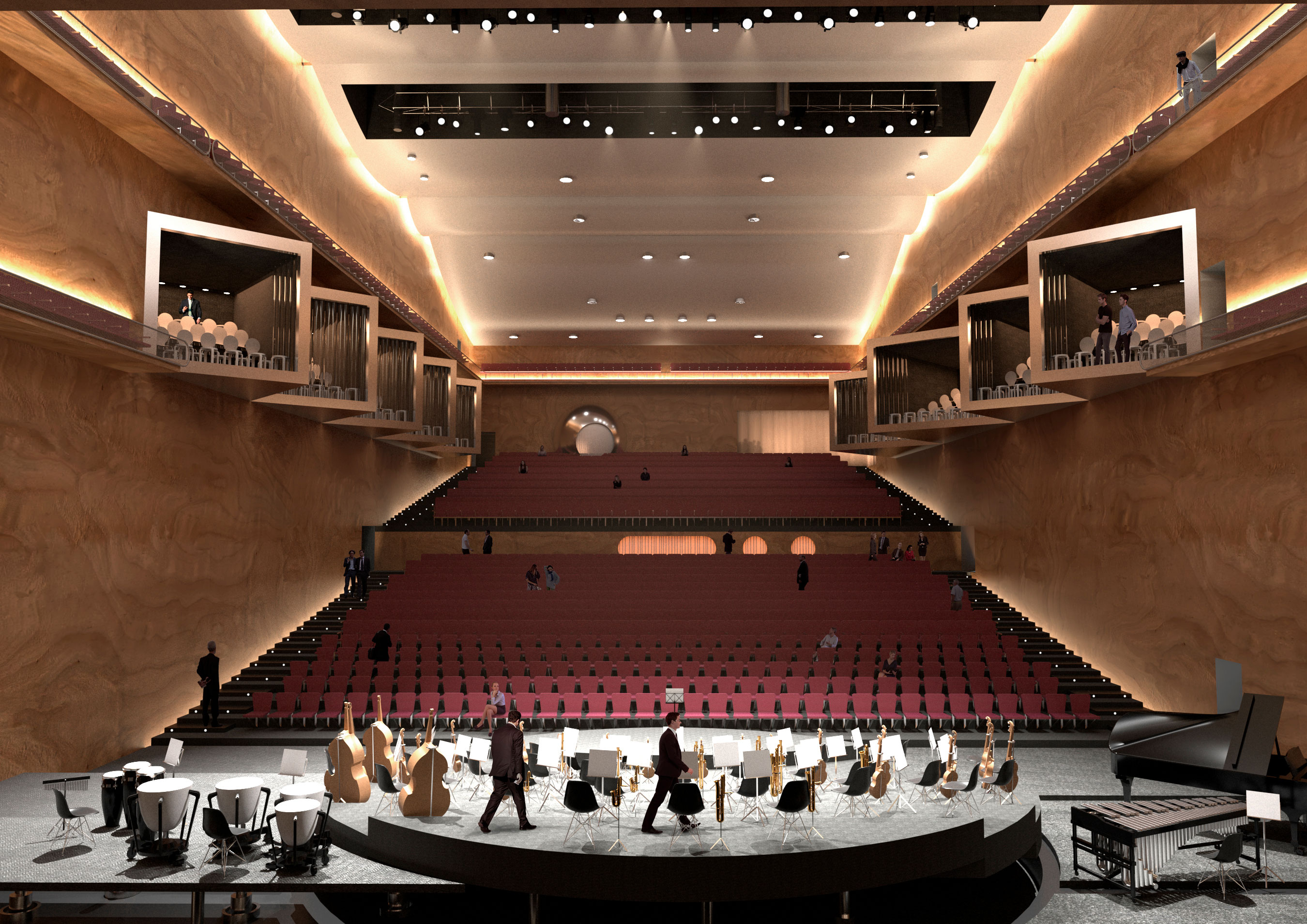 Long Section: Through the Grand Hall  ↑ 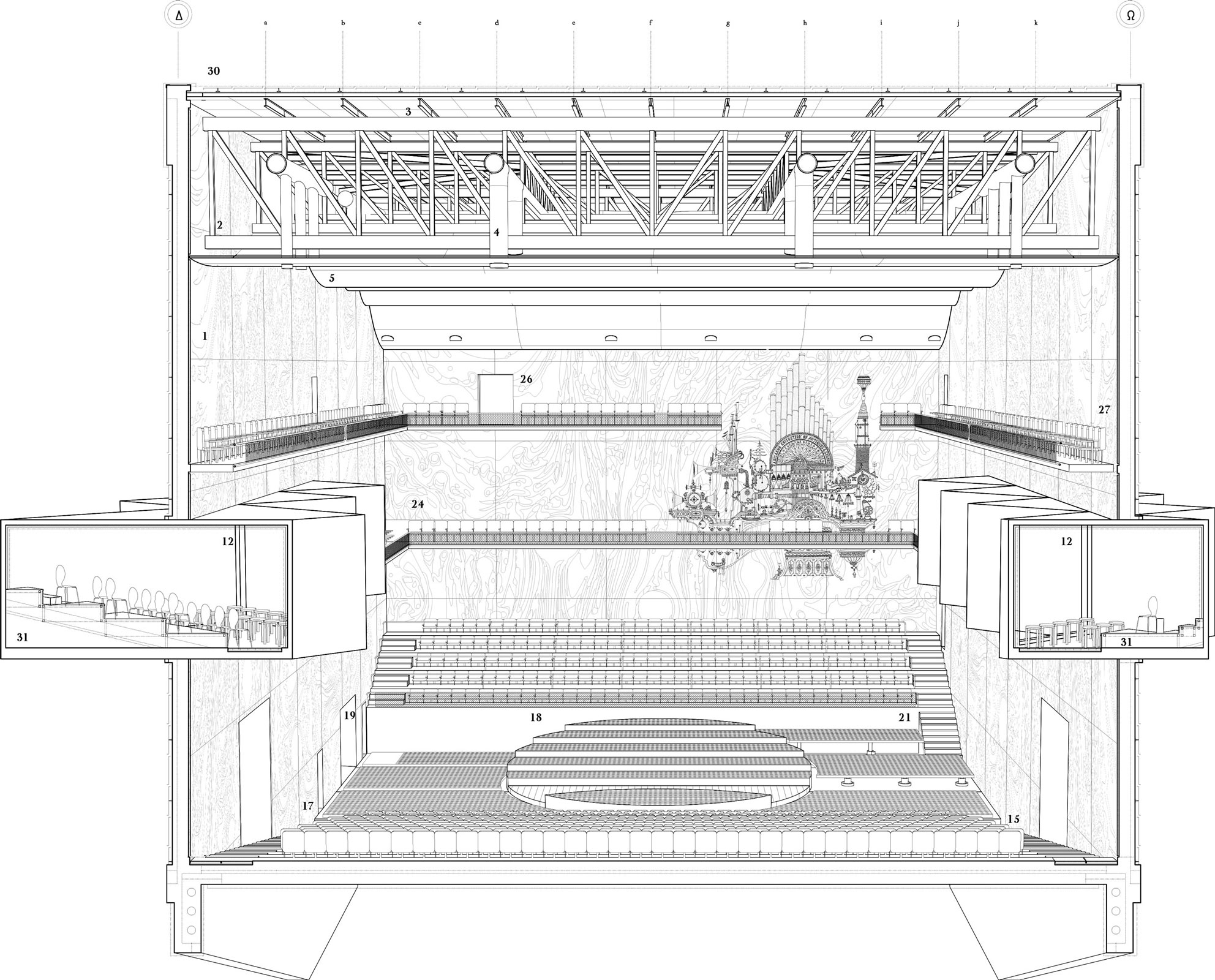 ← Cross Section: Through the Rehearsal Rooms 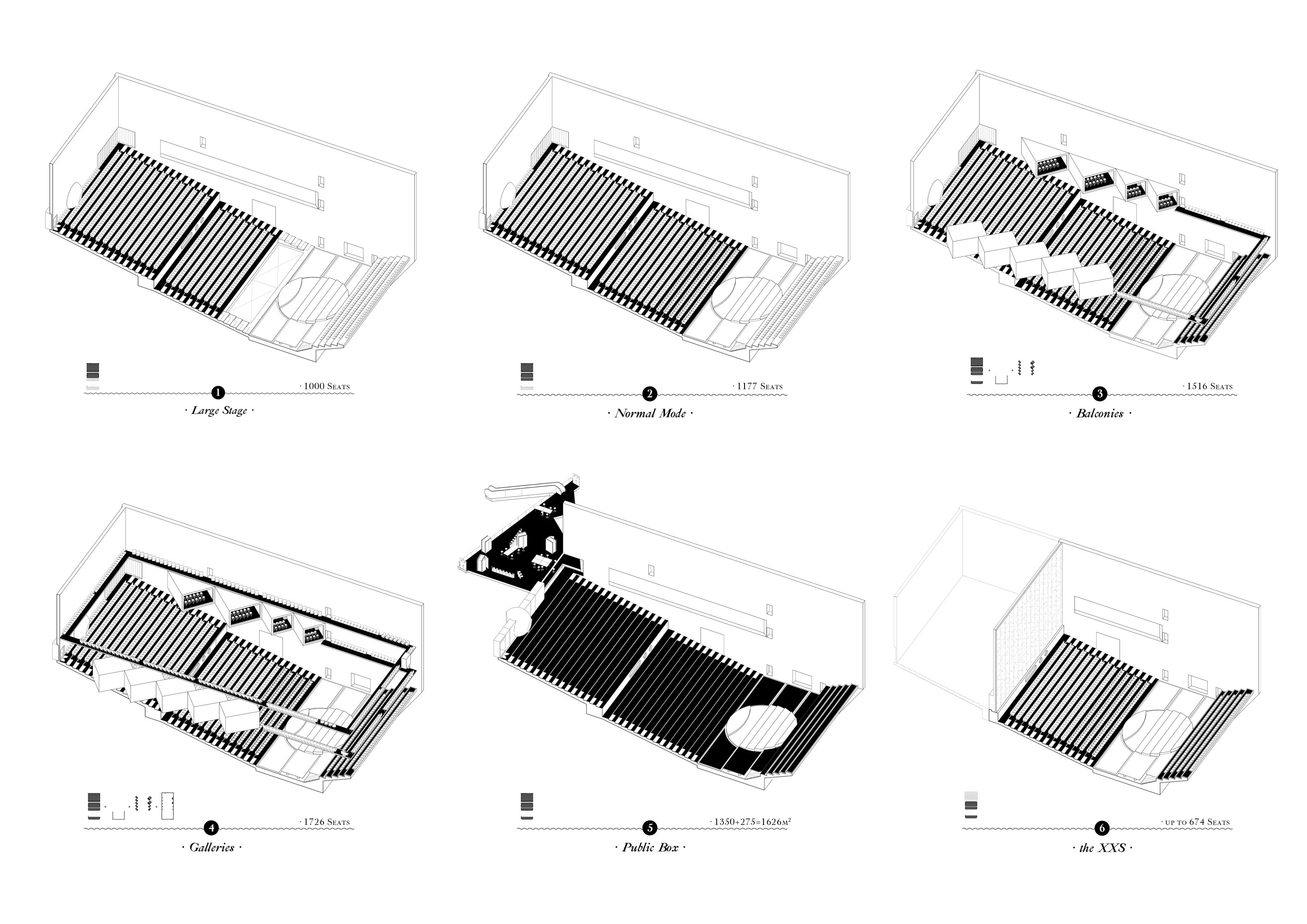 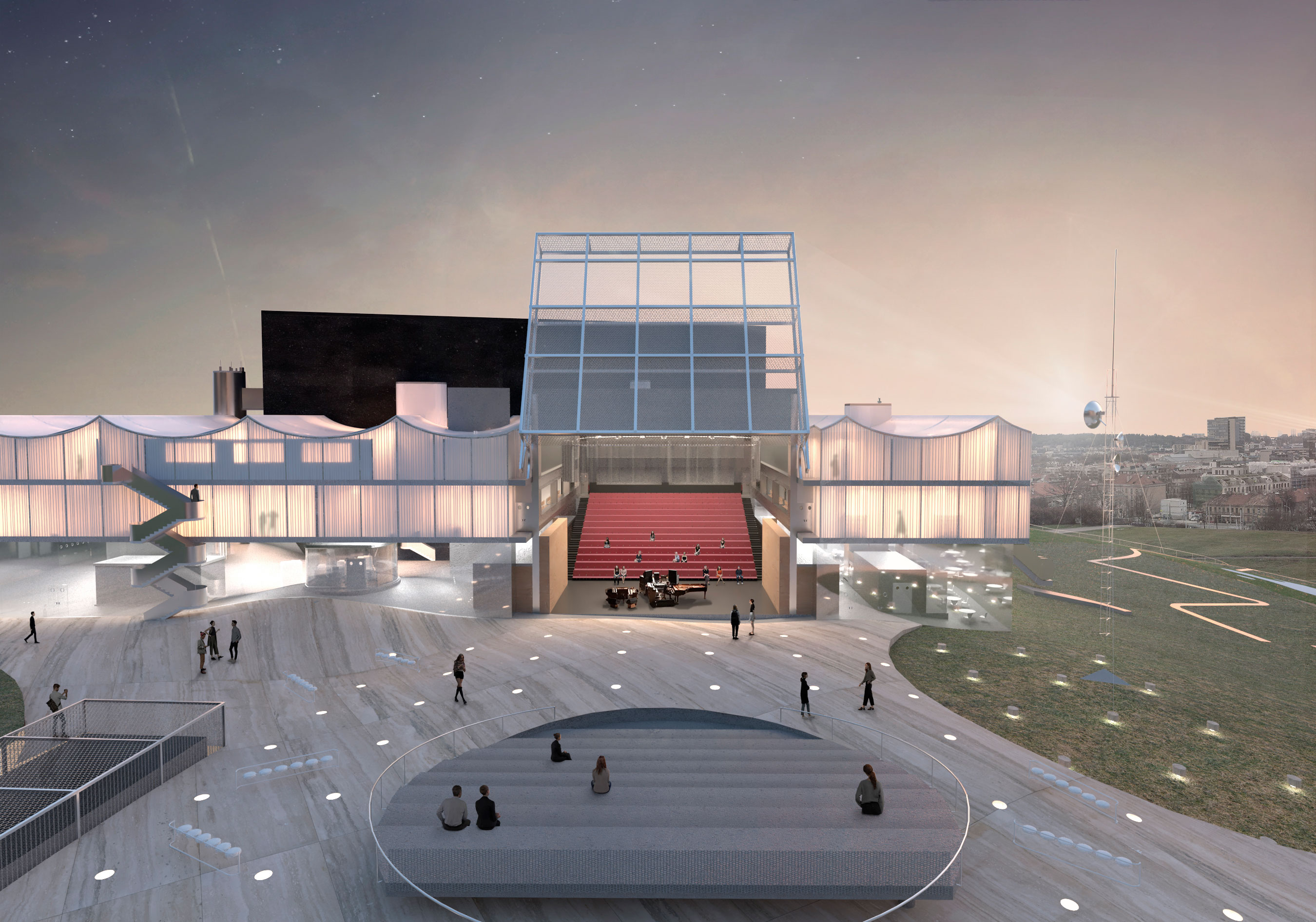 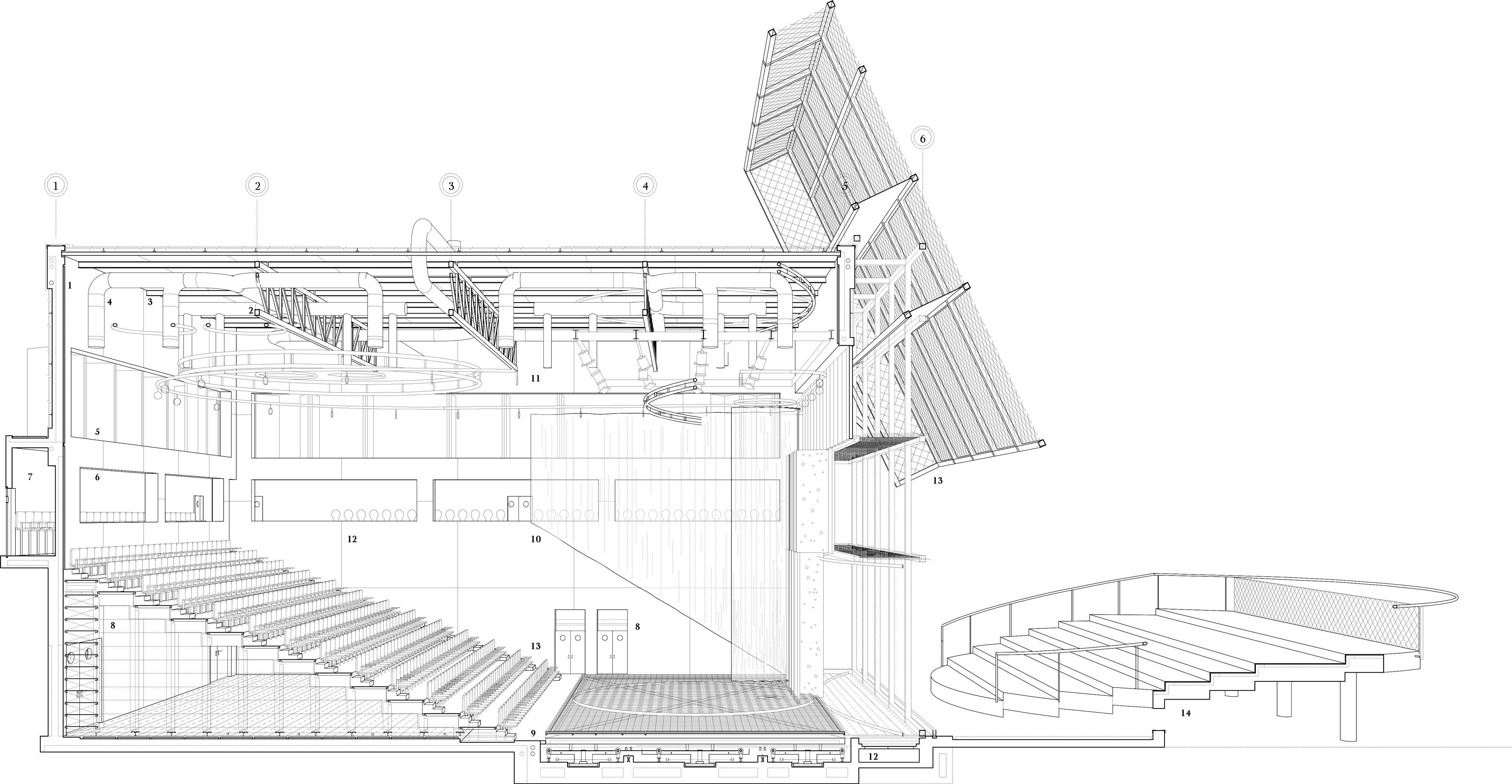 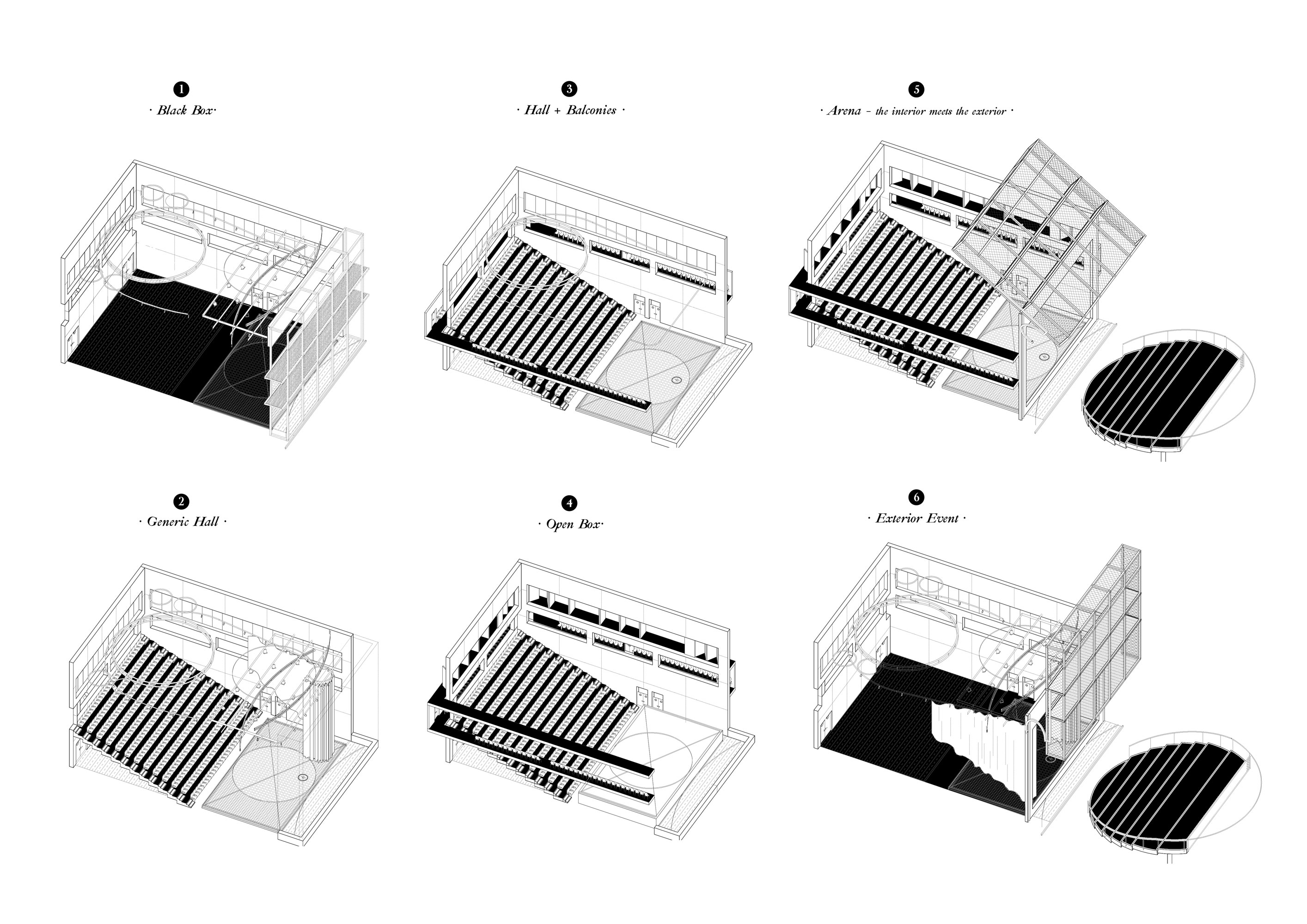 The Ground Floor is driven by a main architectural feature: its Multifunctional re-programmable space – the artificial topography. The whole ground floor is a reconstruction of the original topography of Tauras Hill. Recovering the ‘lost peak’ of the former hill, the ground floor would become a public open space that is almost an encapsulated exterior, a urban public landscape that is contained within the glass walls of the building. Defined by a topographical polished concrete slab its variations of heigh allow different ambients and environments, defining counterpointed areas within a continuous homogenous space. Heterogeneous configurations are possible within this homogenous space. 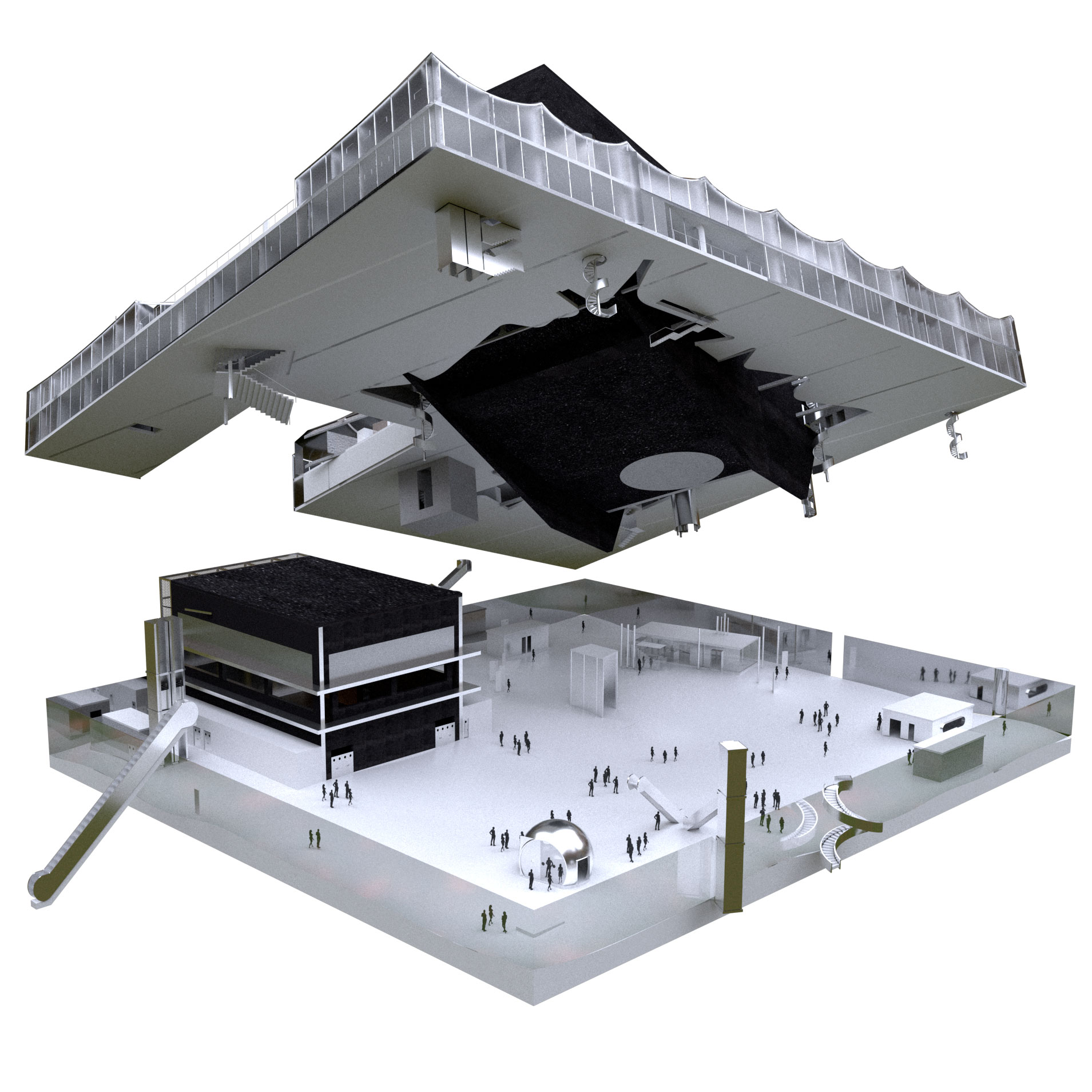 ←Opening the Box: the ground floor as a public topography 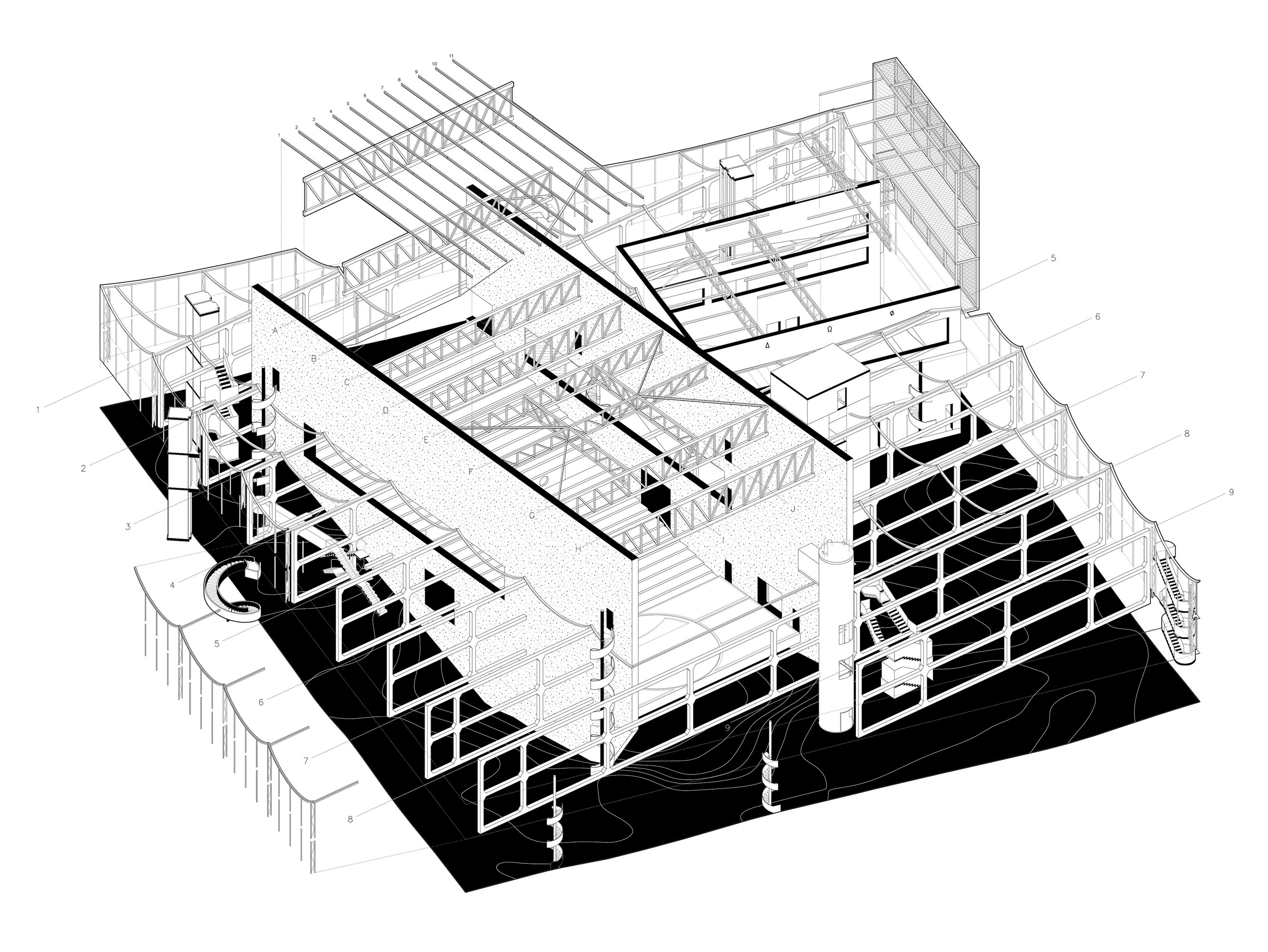 In the same way that the two Concert Halls are the programmatic cores around which the rest of the project’s functions are displayed, they also behave as the two main structural elements that hold the rest of the spaces.

The structural scheme is extremely optimized to minimize its footprint.

The two Concert Hall behave as two structural boxes that function as the main vertical structure.

Being displayed in a relation of 15 degrees-rotation, they hold a series of 9 vierendeel beams that are repeated in a homogenous grid perpendicular to the Main Hall box. That sequence of vierendeel beams allow to hold a two-floor volume that is suspended above an extremely open free-plan topographical ground level.

While the two Concert Hall Boxes are the main vertical support of the building, all the vertical circulation cores provide secondary supports for the above levels, becoming also intermediate supports for the vierendeel beams.

The grid of the vertical supports of the vierendeel beams is also optimized structurally and organizes the space in between the volume. It also serves as support for the general roof structure of the building. Which is hold in between beams in a secondary structural grid of hanging steel frame arcs that are reduced to the minimum shape for covering the in between spaces.

Shape and structure are design together in a constant dialogue where form is not decided deliberately but, instead, as a response to the structural requirements for a certain programmatic scheme.

While the main roof structure is solved as the repetition of an arc scheme, each of the Concert Hall Boxes is provided with its separate independent structure. 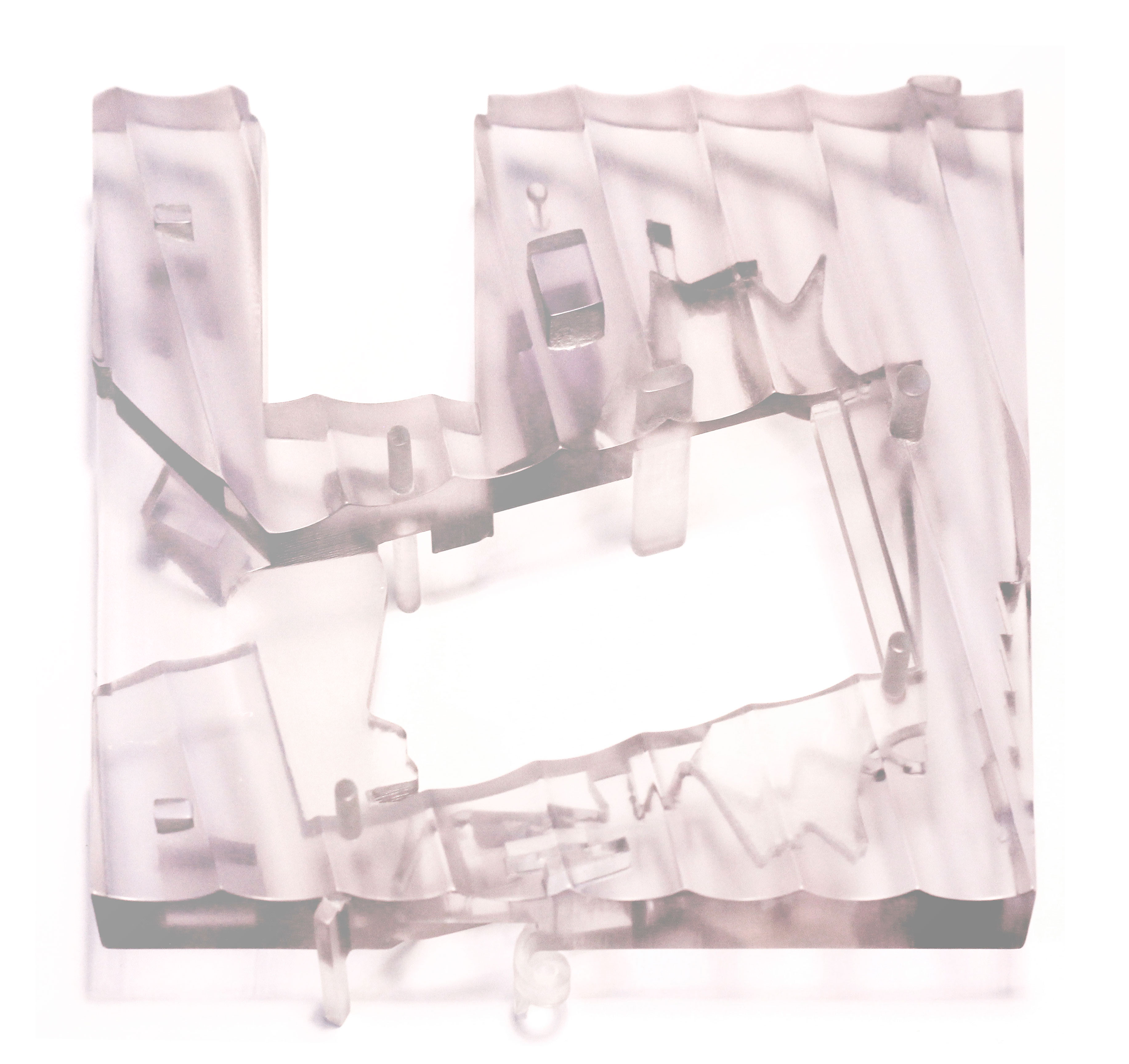 Exterior Image: Through the Hills and Far Away  ↑ 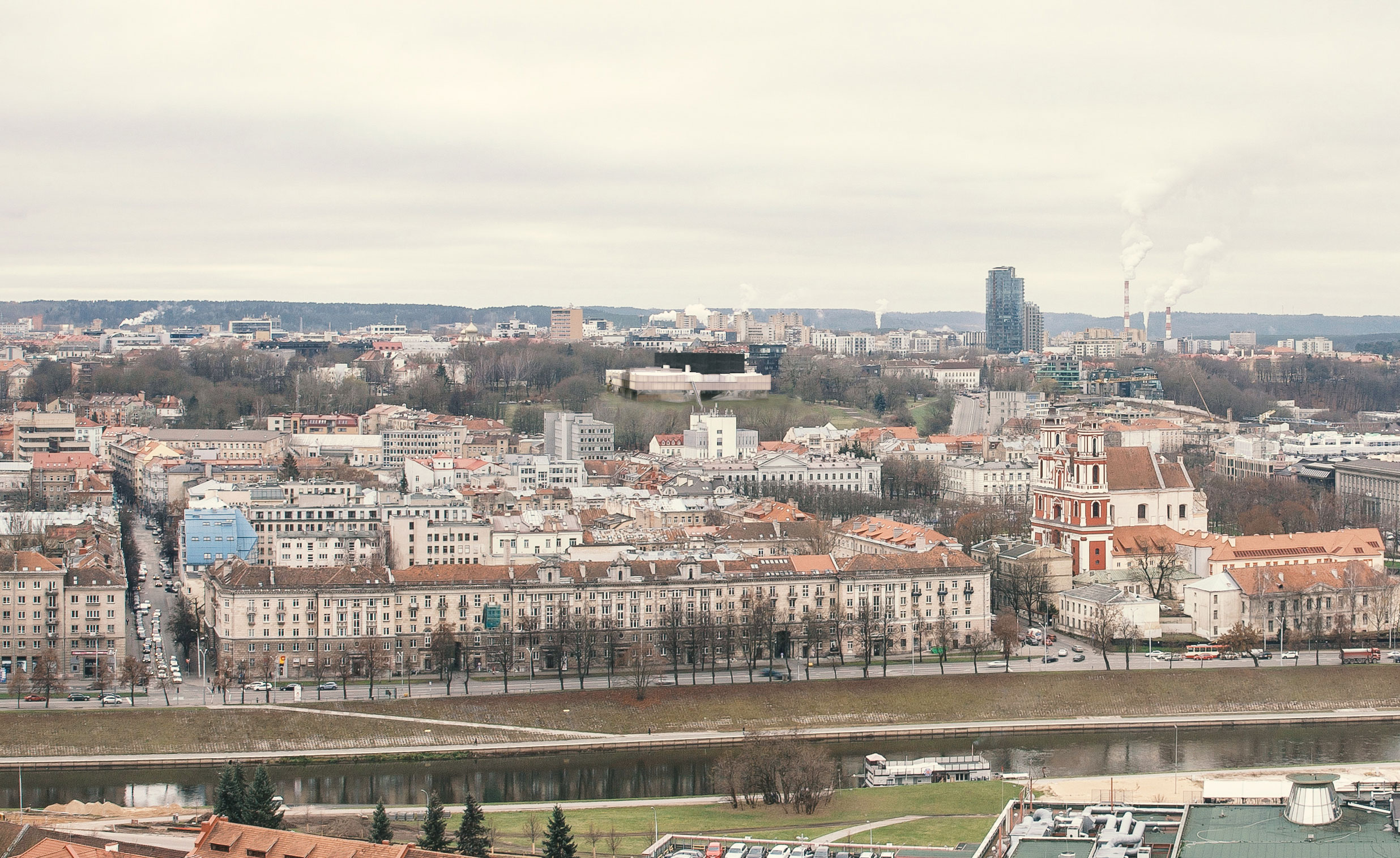