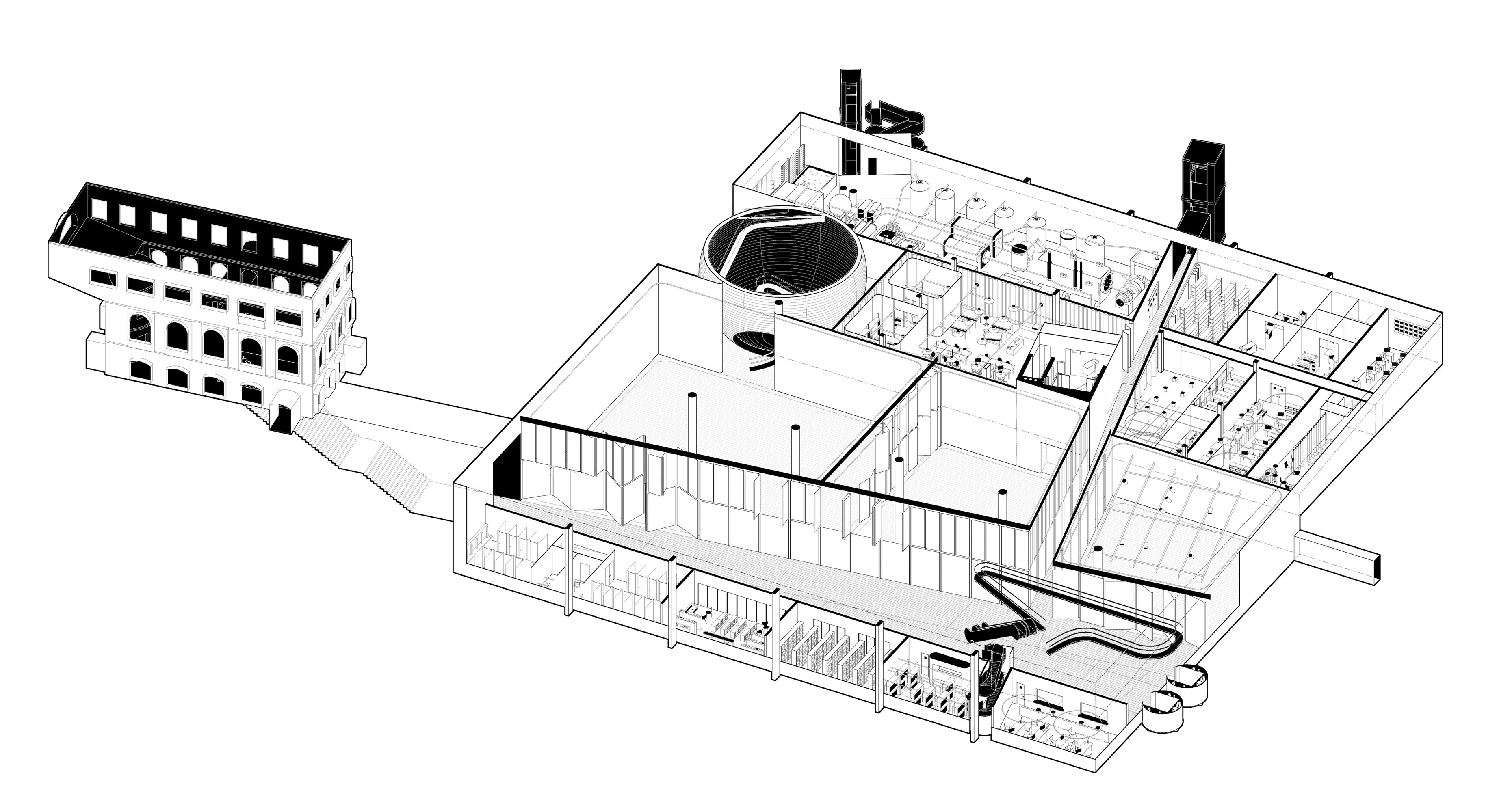 Extension for the National Museum of Finland
International Open Competition

{Under a New Future}

The New Annex of the National Museum of Finland intends to be a Public Cultural Space for the city of Helsinki and not a mere building. The proposal defines an Architectural Device that more than fulfilling the requirements for the Museum program, unfolds a series of extra functions that transform the existing building into framework from which to develop the future identity of Finland.

The annex is conceived as a basement-level buried box that leaves an open public space above it. It is a wildly open unprogramed architectural device. While being extremely specific for the purposes of the restricted uses, exhibitions and events that it has to accommodate, its form offers open configurations for its occupation, allowing unexpected and spontaneous reconfiguration of its spaces.

The scheme is simple: main requires spaces are emplaced in an underground level that is connected to the above surface through several itinerary that are solved through ramps, stairs, elevators and escalators. The Underground level has a clear and neat perimeter. It is just a simple square. Form is not important in the scheme, but the circulations and configurations of spaces.

While facilities and staff areas are confined in a compact optimized volume of private spaces; public spaces are vividly connected to the open exterior spaces and the existing buildings.

‘Middle Class’ recognition from the Jury 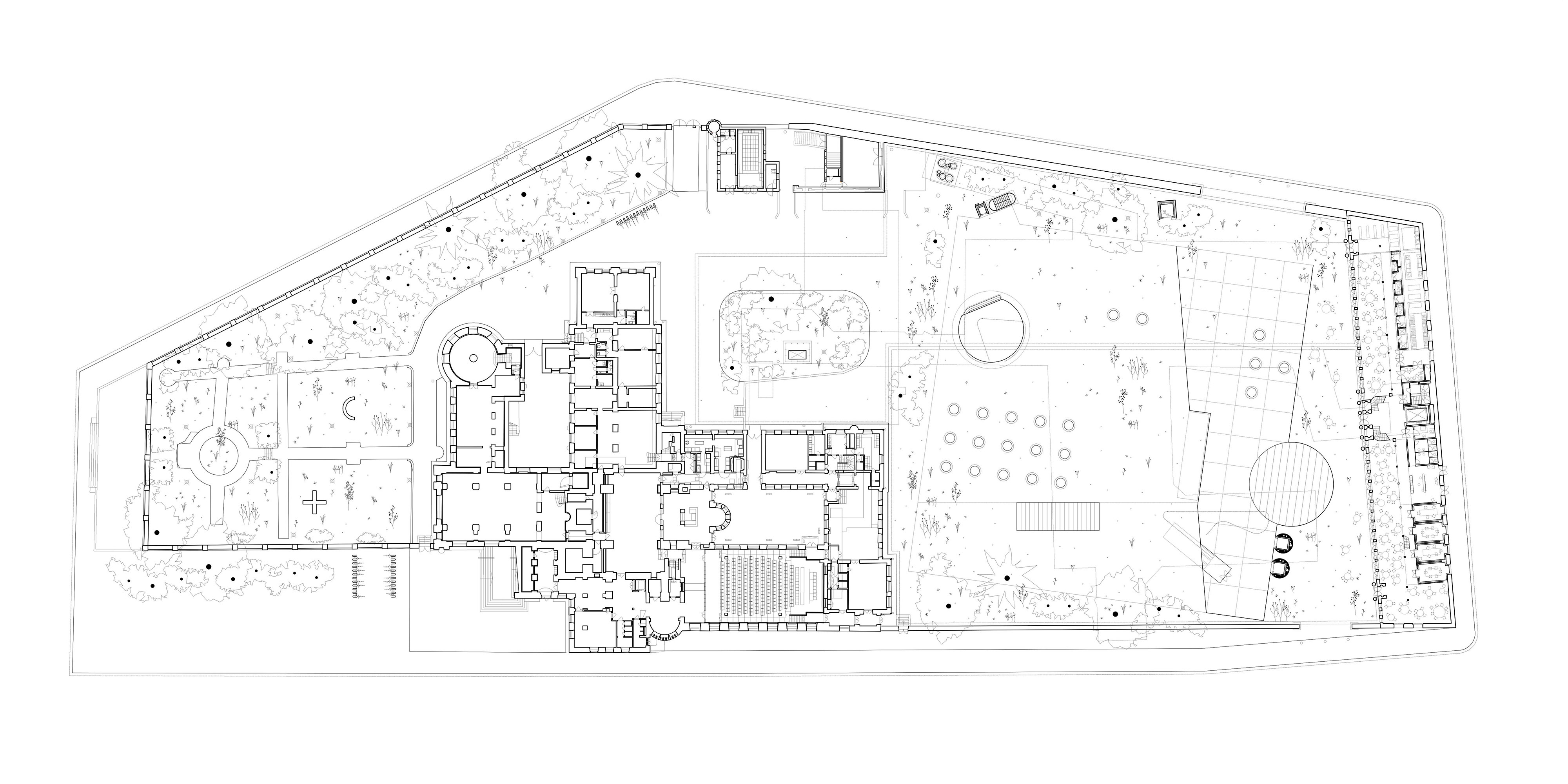 Cross Section through the Existing Building ↑

The attitude that rules the proposal is to respect the existing context. The decision to bury the proposal allows to generate an open public green space above. The structure of the level below enable to perform an architectural movement: a smooth slop is modeled. One third of the Plaza is modeled down with a gentle slop that allows to gradually move down to the level below. It creates an heterogeneous garden where, while not constructing much and respecting the pre-existence, new and diverse conditions are designed. The relation with the Restaurant is defined with a circular travertine stands. The access to the exhibition foyer pops up as a polished concrete dome. The connection with the urban context is optimized through two new openings in the perimetral wall. One that leads to Mannerheimintie and the other that leads to Toolonkatu. 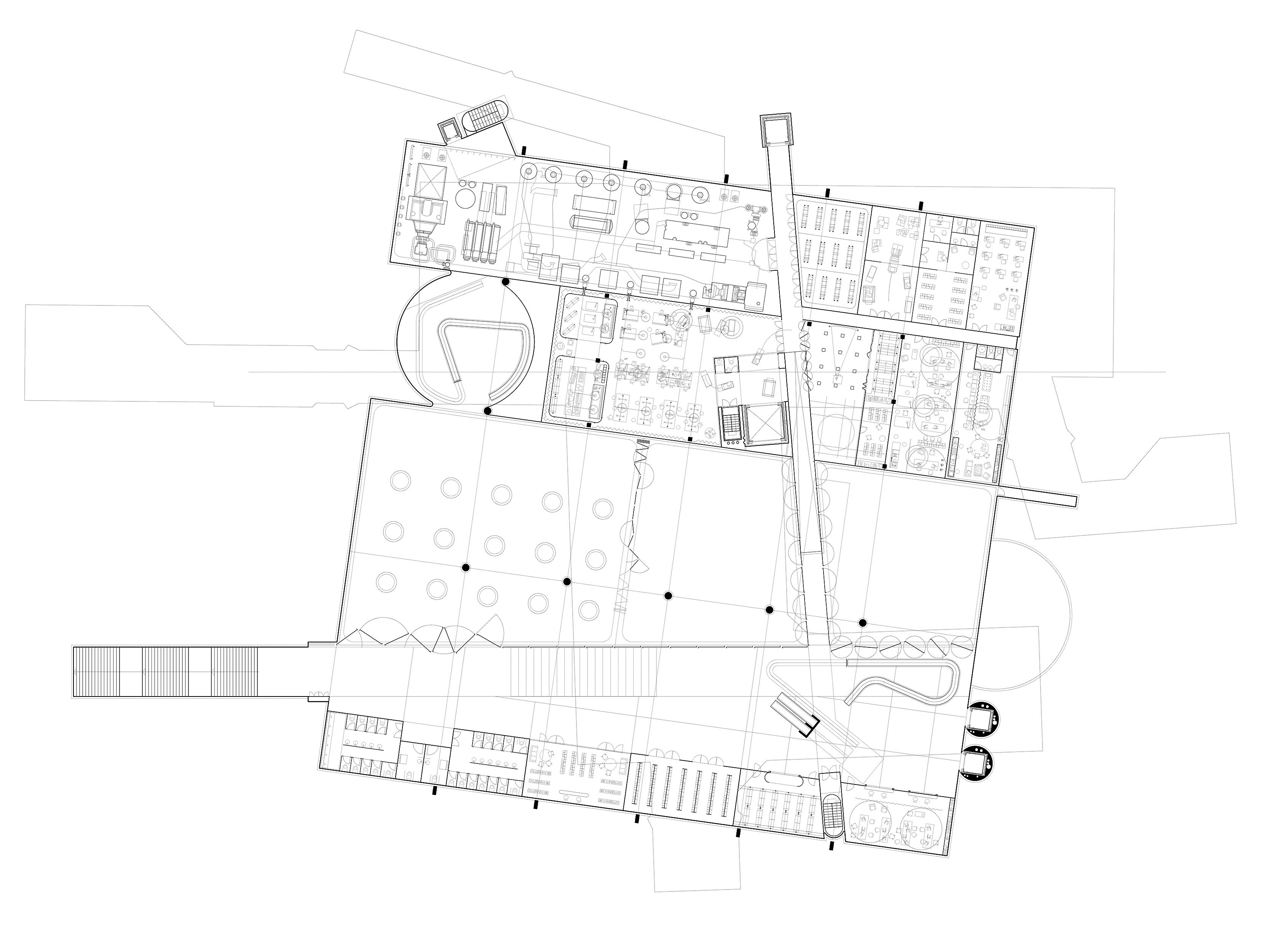 Main Plan: the Buried Annex for the National Museum ⊗ ↑ 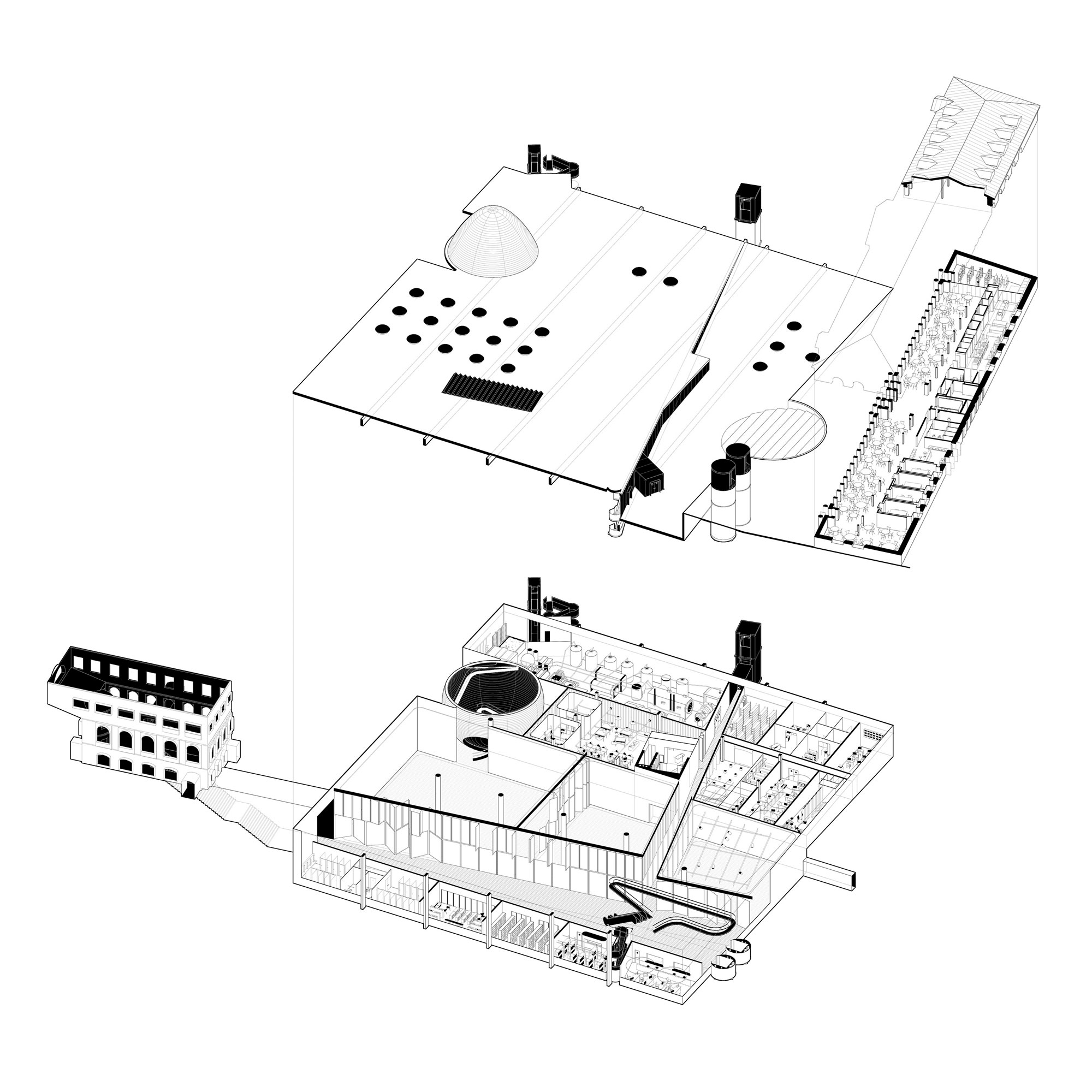 Two strategies are used to integrate the proposal with the existing context:

On the one hand, the relation with the existing Museum building is solved through an underground tunnel that connects the Museum’s main internal courtyard with the Annex. That tunnel becomes a ‘Public Street’. It is a ‘Urban Interior’. Firstly, it converts the courtyard into an Urban Interior by covering it with a light transparent roof. Secondly, the extension of the tunnel in the Annex Piece defines its main foyer, which is equipped with a moveable rotating fragment of the ceiling that, when pivoting down to the underground level, connects the above plaza with the lower ‘Public Street’.

On the second hand, the program of the Restaurant and Cafeteria is emplaced within the existing adjacent unused building. Its interior is cleaned and refurbished to offer a neat and operative scheme for the new gastro use that it will accommodate.

This is nothing like it was in my room

This
is
nothing
like it was in my room

Mr. November, from the album ‘Alligator’
The National {Bebgars Banquet, 2005}

I wish
that
I

I wish I didn’t

The Exhibition & Event  Hall is the main piece of the proposal. Emplace in the middle of the scheme, its spaces are divided into Three Main Halls. Each of them can function separately or be merged altogether due to its moveable partitions. With a maximum floor height of 7 meters they can shelter almost anything. When merged altogether they define an space of 900 square meters. But, if that was not enough, the proposal allows to open all the exhibition hall walls, merging its space with the Entrance Foyer and reaching a perfect rectangular open space of 1200 saucer meters. Such configuration could host large events and special exhibitions when required. With the same built floor area, the proposal provides here the opportunity to eventually grow a 33% of its conventional capacity. 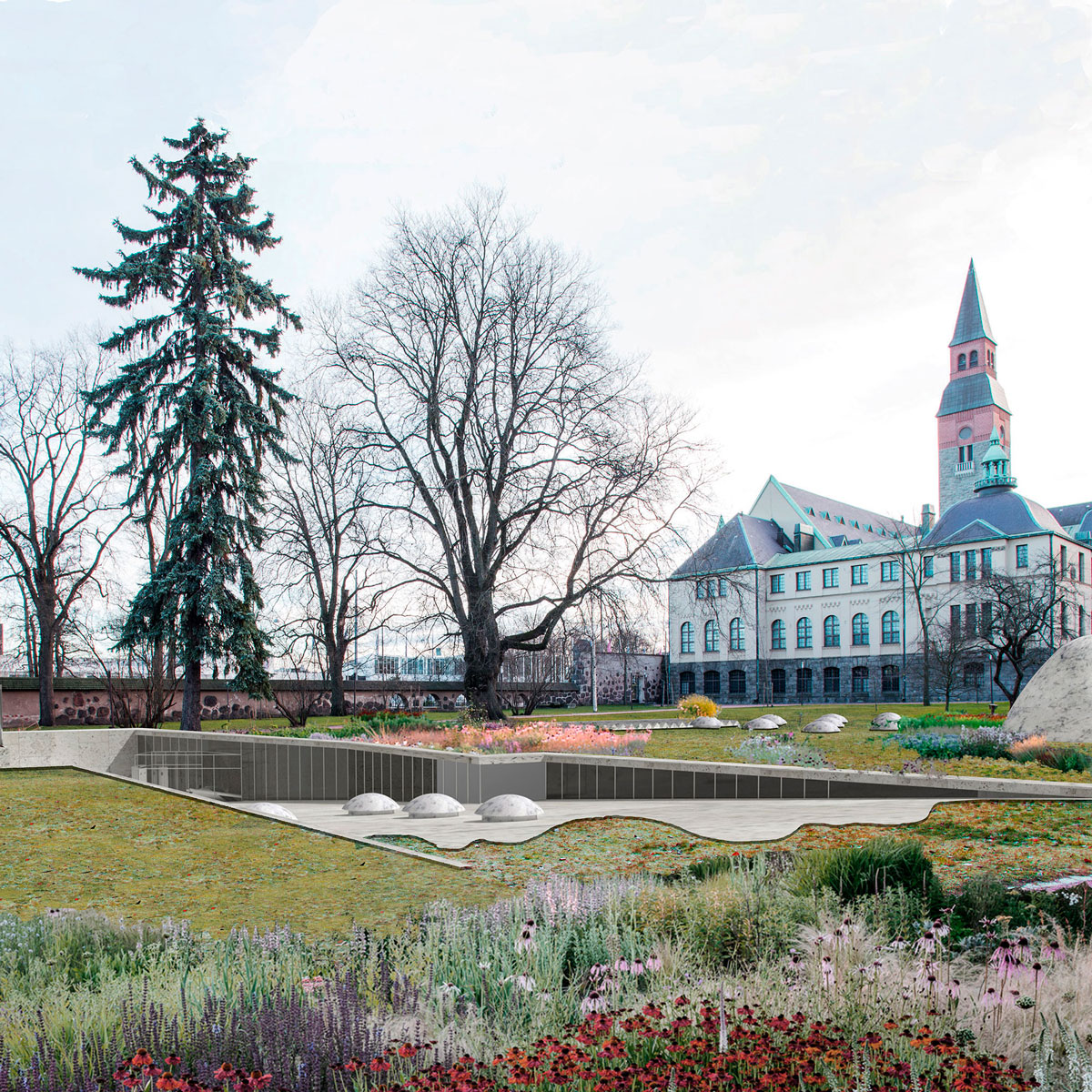 · 2 ·
Down through the Rabbit Hole
(the Above Plaza)